All the Fun of the Fair

"This whole affair... will prove to have a perfectly simple explanation if you don't get into a fever about it. The main thing is to get rid of these cobwebs of suspicion, these ugly clinging strands that wind into the brain and nerves until you feel the spider stir at the end of every one of them."
- Dick Markham (John Dickson Carr's Till Death Do Us Part, 1944)

John V. Turner was a British novelist of detective-and thriller fiction, published under his pennames of "Nicholas Brady" and "David Hume," who churned out nearly fifty novels during a brief period between the early 1930s and the end of World War II in 1945 – passing away before the peace was signed. I've been unable to determine how, or where, Turner exactly died, but I suspect he might have been a casualty of war during the final months of fighting on the European continent. 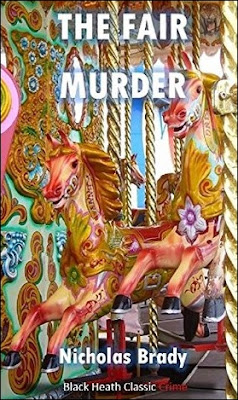 This lack of detailed information is endemic. All I can tell about this long-since forgotten mystery writer is that he wrote, prolifically, during a period of fifteen years, died in his mid-forties and that John Norris of Pretty Sinister Books praised his short-lived detective series about Rev. Ebenezer Buckle. A series comprising of only five novels that were published as by "Nicholas Brady."

Norris wrote three enticing reviews on his blog and described Rev. Ebenezer Buckle as "one of the more interesting least known detectives in the genre."

Rev. Buckle is "a lively amateur sleuth" and botanist, who reminds the reader of Dr. Gideon Fell and Father Brown, but equally alluring are the plots of the cases he investigates, which tend to be bizarre and even nightmarish – occasionally including an impossible crime.

One of the titles that attracted my attention was The Fair Murder (1933), alternatively published as The Carnival Murder, which Norris called "the most outlandish and gruesome" of the Brady novels and concerns the apparent impossible stabbing of the Fat Lady at the fair. So what's not to like?

My only reservation about The Fair Murder is the comparison Norris drew with Alexander Laing's The Cadaver of Gideon Wyck (1934), which did not exactly impress me. Even so, the plot of the story sounded to good to pass on and can already tell you that it lived up to its promising premise.

Twice a year, the fair came to the village of Mudford and the story opens as the August Bank Holiday Fair drew to a close, which the local inhabitants were determined to enjoy in spite of the rain, hail and lightening – plodding, ankles deep in mud, from stall to stall. A carnival barker, Ernie Clarke, tries to draw a crowd to the tent of Sandra, "The Fattest Woman the World Has Ever Known," but the special attraction awaiting the handful of people is the biggest corpse about to be deposited on the police pathologist's slab.

Sandra's hulking remains lies on a coach, behind a curtained enclosure, with a dagger embedded in "the folds of flesh that encircled her throat."

The official side of the murder investigation is in the hands of an eternally skeptical policeman, Inspector Doby, who has always "experienced a curious difficulty of believing anything." Fortunately, Doby's ingrained skepticism proves useful in keeping a level head when he begins to uncover the more peculiar aspects of the murder. One of these curiosities is that it appears unlikely that anyone, who wanted "to stick that woman in the gullet," would have entered the tent from the front, but the back entry looks out on a plot of muddy ground void of any footprints. There is, however, a "perfectly normal, entirely ordinary bucket" standing nearby. And this only the starting point of the twisty, maze-like puzzle Doby has to plot a course through. Luckily, help is on the way. 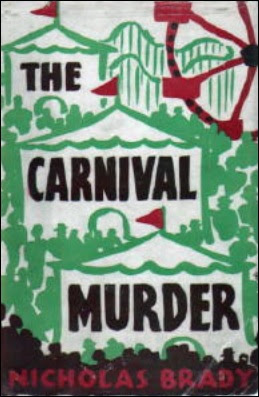 A quarter into the story, Doby is honored with a visit from the Home Office pathologist, Sir Percy Forbes, who brought along a clergyman, Reverend Ebenezer Buckle.

Rev. Buckle is the brother of the Assistant Commissionaire of New Scotland Yard and, whenever he isn't "preaching inferior sermons, maltreating flowers" or "collecting quotations," he's known "to render signal service to police" – becoming "a hell of a nuisance" once "he gets his nose down on the grindstone of crime." But he has become so successful, as an amateur criminologist, that he no longer has to lean on his brother's position to be called in on cases. However, this is only the case in the city of London. Rev. Buckle needed Sir Percy to be introduced with the policeman in charge of the delectable murder case on the fairground in the village of Mudford.

There's a splendid scene between Rev. Buckle and the antagonistic Chief Constable, Edward Melton, lampshading the fact that "the police don't allow strangers unconnected with the Force to assist in any case at all." Chief Constable pretty much showed him the door of the police station, but how the Reverend manipulated him into changing his mind reads like a parody of John Dickson Carr. You know how Dr. Fell and H.M. have a habit of driving Superintendent Hadley and Chief Inspector Masters out of their minds by speaking in a cryptic manner? Rev. Buckle takes a similar route and tells the Chief Constable that he'll never find out who killed the fat lady unless "the mystery of the bucket, the beer bottle and the boiled beef" is solved.

The final chapter, in which Rev. Buckle explains the reasoning behind his deductions, shows that the bucket, the bottle and boiled beef were key ingredients of the murderer's plan. I think that alone demonstrates what kind of detective story The Fair Murder is at heart and who would probably like it.

However, the reader should be warned not to expect a weird, quirky, but lighthearted, detective story when arriving at the (black) heart of the plot, because The Fair Murder is hands down the darkest and most grisly of all Golden Age detective stories – even Philip MacDonald's gruesome Murder Gone Mad (1931) is a mere cozy in comparison. One of these dark aspects of the plot is the truth behind Sandra's metamorphosis from a good looking, shapely woman to a monstrously-sized attraction for the freak show, but the coup de grâce is the truth behind the adaptation papers found in a locked tin box in the victim's caravan. A truth that will make you root for the murderer and boo Rev. Buckle.

I think this is where Rev. Buckle differs from Carr's series-detectives, because Dr. Fell and H.M. would never, under any circumstances, have handed this murderer over to the authorities. Dr. Fell would have burned down the fairground before he would allow that to that happen (e.g. The Man Who Could Not Shudder, 1940), while H.M. would simply keep his mouth shut and withdraw from the case (e.g. She Died a Lady, 1943). Anyhow...

So, purely as a detective story, The Fair Murder is a solid and very memorable mystery novel, but what about the impossible crime element, you ask? Someone did manage to cover the muddy ground without leaving any footprints, but how this apparent impossibility tied in with the murder is very different from what the premise suggested and only served to help Rev. Buckle understand the sequence of events at the time of the murder. I can only really call this book a nominally locked room mystery that should be read for the who-and why instead of the how. Or else you might end up disappointed.

There is, however, a false solution for the impossibility that came to mind when reading the opening chapters and is based on the empty bucket found at the scene.

I envisioned the murderer tip-toeing, backwards, to the back entry and obliterating the toe-imprints in the mud with splashes of water from the bucket. Remember, it had rained heavily right before the murder and the mud had no time to dry. Once inside, the murderer planted a dagger in the neck of the fat woman and hid near the entrance of the tent. When the murder was discovered, the murderer simply mingled with the people who had entered the tent or slipped out when everyone's attention was fixed on the body. Sadly, I had to abandon my pet theory almost as soon as it had occurred to me, because nothing in the story tallied with it.

In closing, The Fair Murder is a very different animal from your usual, classically-styled, detective story. From the carnival background and assorted cast of characters, including an armless-and-legless wonder, to the dark, gruesome motive that lies at the heart of the case. The result is a detective story that will probably stick in your mind for years, or even decades, to come and can understand why Norris holds this series in such high regard. And you can expect me to return to this series before too long. I'm already being tempted by The House of Strange Guests (1932), which is, reportedly, a full-fledged locked room mystery.

Yes, I know, I know. But if you think that's predictable, you should see what I have planned for my next book review. I say book review because I might squeeze in a review of Case Closed or Kindaichi. So you better not touch that dial.
Geplaatst door TomCat on 9/06/2017