"Well, to tell you the truth... there is a growing belief that this particular automobile has wings."
- Prof. Augustus S.F.X. van Dusen (Jacques Futrelle's Best Thinking Machine Detective Stories, 1973)

Last month, I posted a review of The Mystery of the Invisible Enemy (1959) by "Bruce Campbell," a shared pseudonym of Sam and Beryl Epstein, who wrote eighteen juvenile mystery novels about their series-character, Ken Holt – who lives with the family of his best friend, Sandy Allen. The series was published over a fourteen year period, between 1949 and 1963, and were praised for their detailed, logical plots. 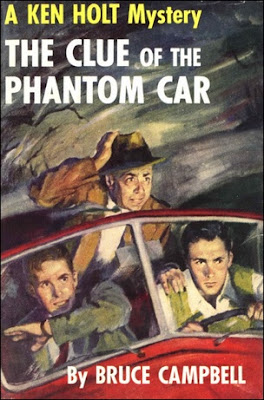 The Mystery of the Invisible Enemy turned out to be a really good example of the early "Young Adult" detective novel and the plot even incorporated a (minor) locked room problem, which is what originally attracted my attention to this series. There were several other, interestingly sounding, titles that also appeared to qualify as impossible crime tales.

Predictably, I wanted to return to this series before too long and since "JJ" has started covering The Three Investigators, I had an excuse to take a break from Jupe, Pete and Bob to go after some of the titles in the Ken Holt series. And that brings me to the subject of today's blog-post.

The Clue of the Phantom Car (1953) is the eighth book in the series and finds the protagonists, Ken and Sandy, working as cub reporters for the Brentwood Advance, which is a local, family-run, newspaper – owned by Sandy's father, Pop Allen. Ken and Sandy are reporting on the dedication of the new lakeside children's playground by the Mayor of Brentwood, but nothing particular newsworthy happens until they journey back home.

They decide to "take the old road" home and this route takes them through a narrow, one-mile land that climbed Sugarload Hill and as their red convertible climbed the hill they witnessed "a sudden flash of light" near "the crest of the hill." A "burst of red flame" and flared as if "the whole wooded crown were ablaze." When they arrive at the spot, they discover a trailer track had gone off the road and lay wrecked in a gully fifty feet below. And the driver was trapped inside.

Ralph Conner of the Conner Brothers Trucking Company is dragged from the wreck and they probably saved his life, but they soon learn this was only the latest accident in a series of dangerous, costly incidents that placed them in danger of losing their insurance cover – because the company is starting them to view as a liability. This latest accident comes with a story suffering from a severe lack of credibility. Ralph later tells to the police that he encountered a car that came right at him and attempted to avoid it, which forced him off the road, but the car must have passed Ken and Sandy as it raced down the hill along the narrow lane.

However, Ken and Sandy swear to the police that nothing passed them "all on the way up to the hill." The car couldn't have turned around and driven off in the opposite direction, because they would have seen the taillights. Nobody in their right mind would drive down that narrow hill road without lights.

So either the car that forced Ralph off the road "sprouted wings and flown away" or he made up a story that lay blame elsewhere to hold on to their insurance. As expected, Mort and Ralph have their policy canceled and this means they have to sell their trucking company. Mort and Ralph are beloved members of the Brentwood community and Ken and Sandy want to help them to keep the company, which they decide to do by trying to find evidence that the phantom car was not merely a figment of the imagination.

In my celebrated opinion (humility? Pfui!), the investigation into this seemingly impossible disappearance, and the explanation, could be condensed into short story form and presented as adult detective-fiction. A short story along the lines of the short (locked room) stories by Edward D. Hoch and Arthur Porges.

The authors do not simply, or dumb down, the plot to accommodate their young readership or the two boy-detectives. They even come up with a completely wrong answer on their attempt to crack the case, but the result is a false solution that is as clever as it original. It showed the boys playing around with ideas and looking into the various possibilities, which also distracts from the ultimate simple answer to the problem. One that Ken stumbles to during a homely scene and this incident suddenly makes a clue given by Ralph during the second time he was asked about the accident by Ken very clear.

So, as an impossible crime story, the first half of the book offers a pleasant read to the apostles of the miracle problem, but there's another side to the case.

The question of who could be behind the accidents, or sabotage, is not a big mystery, but who they exactly are is. And, more importantly, why. You can argue that the book is almost more of whydunit than anything else. Obviously, someone wanted to buy the small-town trucking company on the cheap, but what possible profits could be gained by buying uninsurable company?

I assumed something valuable had been hidden inside one of the trucks, or somewhere in the garage, and can only be retrieved by having unrestricted access. So Mort and Ralph had to be forced to sell their company. However, the actual explanation lacked the originality of the phantom car plot-thread and veered into cartoon villain territory. Not that it was bad and the authors wrote several exciting scenes around this stock-situation, which was actually a nice change of page compared to the first half. And the authors really loved placing their 17-year-old detectives in seriously dangerous, life-threatening situations. Anyway, it might for a well-written, exciting ending.

Something else that has to be mentioned is that Robert Arthur must have been influenced by Ken Holt when he created The Three Investigators. I have noticed a couple of interesting commonalities exist between both series. 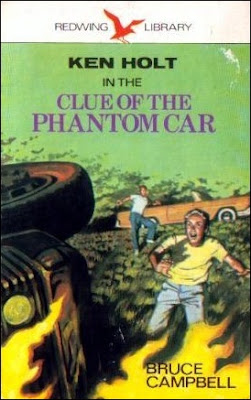 JJ has commented on the unusual family situation of Jupiter "Jupe" Jones, who lives with his aunt and uncle at their junkyard, which is a home situation that can be compared to Ken Holt's backstory. Holt is a motherless, teenage boy with a foreign correspondent as a father who is always traveling across the globe. So he lives as an adopted son with Sandy's family and works at the newspaper of Pop Allen. I suppose you also view the other Allens as fullfilling the same role, for example, the two Bavarian brothers who work at the junkyard of the Jones family.

Interestingly, the relationship between Kent and the Allens are introduced The Secret of Skeleton Island (1949) and that's the same book-title as the sixth entry in The Three Investigator series. Even more interestingly, the main plot-line of The Clue of the Phantom Car is practically the same as the plot of The Mystery of the Vanishing Treasure (1966), which also has a sub-plot about an impossible disappearance/theft.

I suppose Arthur could have been aware, or even read, this series and drew inspiration from it when he began to write The Three Investigator books. So that would make Ken Holt and Sandy Allen the literary ancestors of Jupe, Pete and Bob. And that would make my discovery of this series even better!

So, all in all, The Clue of the Phantom Car is a pleasant combination of the cerebral detective story with danger-pact ending with the high-light being the impossible problem and the false solution. Definitely a title I can recommend to readers of both juvenile mysteries and impossible crime fiction.
Geplaatst door TomCat on 9/30/2017