"It seems impossible, but Sherlock Holmes once said that when you have ruled out all other answers, what remains must be true."
- Jupiter Jones (Robert Arthur's The Mystery of the Whispering Mummy, 1965)

Earlier this month, "JJ" of The Invisible Event wrote a great blog-post, titled "Trifecta Perfecta – A Trio of Locked Room Riddles for Younger Readers," which coincided with a serendipitous discovery I made around the same time – once again demonstrating that these detective blogs are a hotbed for cosmic synchronicity. What I found was a practically unknown locked room novel in the juvenile, or young adult, category. And the publishing date places the book on the tail-end of the genre's Golden Age!

The Mystery of the Invisible Enemy (1959) is the fourteenth book in the Ken Holt series by Sam and Beryl Epstein, written under the joined pseudonym of "Bruce Campbell," consisting of eighteen books in total. This series is purportedly "one of the very best boys' series" and the stories were praised for their "logic and great attention to detail." 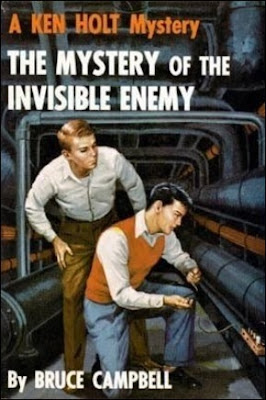 Ken Holt is the protagonist of the series and the son of a well-known foreign correspondent, Richard Holt of Global News, but lives with the family of his best friend and aspiring photographer, Sandy Allan – who runs a small-town newspaper called the Brentwood Advance. An arrangement stemming from the first book in the series, The Secret of Skeleton Island (1949), when the Allen family helped "a terrified Ken Holt" locate his missing, or kidnapped, father. In the end, the motherless Ken was invited to come live with the Allens, which suited his foreign-correspondent father, because the alternative would have made him the loneliest latchkey kid in the United States.

I should also point out that this series was obviously geared at a slightly older readership than, let's say, The Three Investigators by Robert Arthur and William Arden. One of them is that Ken and Sandy are in their late teens, probably sixteen or seventeen years old, who drive a red convertible, but more notably are the severity of the crimes. There are no less than three, very serious, attempts at murdering or severely wounding people. But more on that later.

The Mystery of the Invisible Enemy begins very benignly: Ken and Sandy, acting in the capacity of cub reporters, are tasked with reporting on the annual Halloween party for the employees of the Brentwood Foundry and Casting Company – who are about the celebrate their tenth anniversary. Only eleven years ago, the plant was owned by the Alborn Iron and Steel Corporation, but they deemed the Brentwood location obsolete and abandoned the plant. A decision that was an "absolute tragedy" for more than a hundred families in Brentwood. Luckily, a former plant manager, Lew Collins, gathered a group of local investors and breathed new life into the company. It was "a tough pull," but Lew's management saw the company grow and expand. And they were even able to sell shares in the company.

However, dark clouds were gathering above the company as its tenth anniversary looms on the horizon.

Alborn was offering to buy the company back, after it made profitable again, which is supported by a local real-estate magnate, Bob Jennings, who had bought himself into the company and now wanted to see a return on his investment – resulting in "a knockdown, drag-out fight." Collins barely held on to his company, but Alborn was underbidding the Brentwood plant. And that's not the only problem facings Collins. Ken and Sandy learn during the Halloween party that Collins is in the grip of a ruthless, devious and clever extortionist.

Collins has been diligently working an "an entirely new type of casting machine," one that casts molten metals quicker and more efficiently, but one day, an anonymous letter arrived with an enclosed photograph of a section of the blue prints of the automatic casting machine. The letter writer threatens to mail the full plans to all of their competitors, but gives Collins the opportunity to buy back the plans and negatives for the "reasonable price" of $100,000! Only problem is how the letter writer had been able to photograph the plans.

The casting machine was designed, constructed and perfected inside a practically hermetically sealed laboratory. A room with the only entrance, and exit, being a door that opened on the private-office of Collins and the only windows were steel-shuttered with locks that were "crusted with a layer of dirty grease" that took many months to accumulate. There were no scratches around the lock of the door to indicate that somebody attempted to pick it.

This is where the plot shows its first signs of the series reputed cleverness, because the locked room puzzle poses a double-edges problem for the boys.

Logically, the only person who could be the extortionist is one of the three people who are in possession of a key to the laboratory, which Collins and two of his engineers, Bruce Winters and Will Caton, but Collins refuses to believe he has been betrayed by the boys he helped get through college – something that, at first, appears to be the case. However, Ken and Sandy pursuing this angle shows them to be the type of fallible detectives in the Berkeley-Queen tradition.

I found this to be interesting take, particular in a juvenile mystery series, on a character who had been described as having a brain that could work "faster than a calculating machine."

So back to the drawing board for Ken and Sandy. What they're left with is a genuine locked room problem, which brings them to the darkest, most secretive, recesses of the company, but discovering the secret of the locked laboratory nearly cast them their lives. They're overtaken by the extortionist, tightly bound and gagged, and left to face certain death in one of the dangerous fanning-houses of the plant.

This is not your typical, dime-a-dozen, spot of danger usually found in these kind of juvenile novels, but an honest-to-god attempt at murdering the boys. The writers make it abundantly clear that the extortionist wants them out of the way and their predicament is positively harrowing. Ken and Sandy are stuck their for many hours and several attempts to find a way to escape their bonds fail miserably. Once again, this is a part of the story where series reputation manifest itself. The boys are gagged, but Ken came up with a clever way to communicate with Sandy by humming the tunes of popular songs. And how did Ken communicate to Sandy this is how they could talk to one another? Ken simply hummed the tune of "Say It With Music." A brilliant piece of reasoning and writing on the part of Ken and his creators. Easily my favorite part of the book.

Of course, this assault and attempted murder of Ken and Sandy proves to be the downfall of the extortionist, which came on top of the assault and attempted murder of a plant employee who was pushed off a ladder. On a side note, the assault that left that employee in the hospital functioned as a clue to the extortionist's schemes at the company and he had to put that person out of the way. The only reason this character lived to see the end of the book is that the target audience were teenagers, but otherwise, the plot was only a couple of steps removed from being adult (detective) fiction.

Finally, I should give some attention to the problem of the locked laboratory. I've seen variations of this locked room trick before, but, again, the writers did something really clever with this trick. Ken and Sandy realize that the locked room trick only gave the intruder limited access to the room, which leaves them with the question how the extortionist was able to gather a full set of photographs.

My only complaint is that Ken almost immediately figured out this angle to the locked room, but then again, they would find themselves in a life-threatening predicament only moments later – which made it necessary to get this plot-thread out of the way.

All in all, The Mystery of the Invisible Enemy was a pleasant and surprising discovery with a plot and story that was as good, and in some regards even better, as the best titles from the iconic series about The Three Investigators. So you can expect my return to this series to take a closer look at such titles as The Clue of the Phantom Car (1953) and The Mystery of the Vanishing Magician (1956). I'm not sure whether, or not, they are actually impossible crime stories, but the plot descriptions are very promising.
Geplaatst door TomCat on 9/10/2017