Frances Noyes Hart was an American writer of short stories, which were published in the Saturday Evening Post, Scribner's Magazine and Ladies' Home Journal, but she also authored three crime-related novels and her most well-known work is arguably The Bellamy Trial (1927) – a courtroom drama that was selected as a Haycraft-Queen cornerstone of detective-fiction. But she also penned a traditional-styled detective novel that, in some regards, preceded Anthony Berkeley's Panic Party (1934) and Agatha Christie's And Then There Were None (1939). 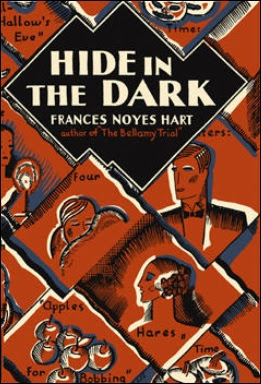 Hide in the Dark (1929) takes place on All-Hallows Eve, 1928, in an untenanted manor house, called Lady Court, where a group of former college friends have gathered to have an old-fashioned Halloween party.

The drove of friends jokingly refer to themselves as the March Hares, because the original members were born in March and claimed to be mad, but wisely decided not to insist on these qualifications when new people were drawn into the circle of friends. However, they slowly grew apart since the last time they threw a house party was ten years ago. So this celebration of All-Hallows Eve is also a reunion of the March Hares, but a pall hung over the gathering by the absence of one of them, Sunny, who drowned herself when she was only nineteen – which happened ten years ago. And the motive for killing herself may lie with one of her former college chums attending the reunion party.

So there you have it. A story with a conventional, but not badly drawn, backdrop with a premise that's an early example of a classic plot-device. Hide in the Dark could easily have been a fun or even an historically important detective novel. Sadly, the first half of the book unfolds at an excruciatingly tedious pace and the yammering of the boring cast-of-characters completely ruined the book for me.

There are references in the opening part of the book to the past suicide and the bridge connecting the house to the mainland is swallowed by the rising water of the creek, which effectively isolated the party from the outside world. But the only interesting bit from this portion was the backstory of Lady Court.

A story concerning the ancestor of one of the party members, Sidney, who was "a famous duelist" and his consistent fighting made the elites of the time decide that "the safest place for His Majesty's servant was His Majesty colony," which brought him to colonial America with his young wife, Damaris – who had wept bitter tears for lost England upon arriving in the strange land. One evening, Sidney was stabbed in the back of the neck, while he sat at his desk, and everyone assumed he had been murdered by two runaway slaves. There are some mysteries surrounding the murder, such as missing sheet of paper and "a few grains of sand" on the desk.

When I read this backstory, I hoped the historical mystery was going to be used as a (minor) sub-plot with a solution that would make this plot-strand a forerunner of the modern-day historical detective story, but alas, Sidney's murder proved to be nothing more than mere window dressing.

After the story, mercifully, managed to drag itself across the halfway mark, the story finally gets a little bit more interesting. 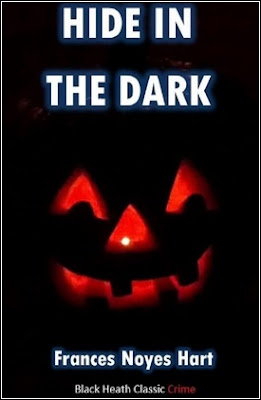 As the weather outside worsens, the party decides to play a host of tradition (Halloween) games, like bobbing for apples, but the main event of the night is the game that lend its name to the book-title. The game is pretty much hide-and-seek with the lights out and the person who has to hide himself found a perfect hiding place, which is an idea inspired by one of the C. Auguste Dupin stories by Edgar Allan Poe ("you know, the purloined letter stuff"). The most obvious place in the house, "where no one in God's world would think of looking," namely the big sofa in front of the fire where he had to wait until he heard the signal to hide. And he would simply continue to sit in that spot.

Only minutes after the gong signaled the start of the game, a scream pierces through the dark house and when the lights are turned on the hider is found on dead on the sofa. A stab wound in the neck.

As said here above, this is the point where the story becomes slightly interesting, as "the rôle of inquisitor" is passed around between several characters, but the most notable aspects where in the tail of the story and concerns two of the characters taking blame for the murder in order to protect one another – which brought the work of Christianna Brand to mind. I also liked how Hart handled, what could have been, a cliched scene with the murderer attempting to commit suicide. It was a nice inversion of expectations and in keeping with the murderer's personality.

However, by the time I finally arrived at this point of the story, I had completely stopped caring about who did what and why. And this can solely be blamed on the tortuous slowness of the first half of the book. The sluggish pace of that first half managed to extinguish any flicker of interest I might have had in the plot or character.

So, technically, it has to be admitted that Hide in the Dark is not entirely devoid of interest as a detective story, but getting to those parts is an absolute chore and, once you arrive there, were hardly worth this reader's time or patience – making this a genuine letdown. I can only really recommend the book to genre scholars and historians as an ancestor of the previously mentioned books by Berkeley and Christie, but leisure readers might want to give this one a pass.

To end this review on a positive note, I received my copy of No Killer Has Wings: The Casebook of Dr. Joel Hoffman (2017) by Arthur Porges today. So that one will be next on the list.
Geplaatst door TomCat on 9/12/2017