"Always approach a case with an absolutely blank mind..."
- Sherlock Holmes (Sir Arthur Conan Doyle's "The Adventure of the Cardboard Box," collected in The Memoirs of Sherlock Holmes, 1893-94)

The 62nd volume of Case Closed, originally titled Detective Conan, begins with the conclusion to a short, elementary story that began in the previous volume and concerned the missing brother of the waitress of Coffee Poirot – who's suspected by the police of having murdered his employer. There's not much that can be said about this story except that the murderer is an idiot who should have accepted the frame had failed and kept quiet. 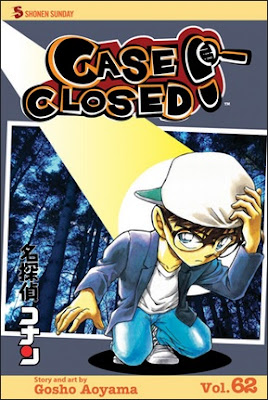 The next three chapters make up a semi-inverted detective story with a Crofts-Bush style alibi-trick at the heart of the plot.

Rachel Moore's mother is a well-known attorney, Eva Kaden, who has a former judoka as a client, named Yuko Arasawa, and she recently consulted Kaden regarding a problem pertaining to her troubled husband, Shiro. Arasawa confided in Kaden that Shiro is "haunted by the conviction that someone is out to get him," but she believes this elusive stalker is merely a figment of his imagination. So Kaden promised to personally search their home and prove to him that "there's no sign of surveillance."

But when they give him a call, he tells them that he was called away to attend a funeral and asks them to move their appointment to later that evening. Kaden and Arasawa, alongside Conan and Rachel, decide to kill some time by getting a bite to eat at the hotel down the street, but Arasawa has begun to act slightly suspicious – such as inexplicably placing Shiro's phone call on speaker. When they arrive at the home of the client, they have to poke around the premise for Shiro and his lifeless body is eventually found inside a small storage room.

Conan and Kaden have their suspicions against the judo expert, but she possesses "a nearly perfect alibi" with an incredibly tight, ten-minute window when she took a bathroom break. And that's hardly enough time to drive to her home, strangle her husband and go back to the hotel's restaurant again. So how did she do it?

The alibi-trick is not too complicated and you should be able to (roughly) work out how it was done, but what I liked about it is how Arasawa created the alibi by using, an acting upon, the actions and movement of her husband – cleverly putting half of the works in the unwitting hands of the victim. A good and solid story that also takes a peek at the strained relationship between Kaden and her estranged husband, Richard Moore, who gives her huge clue over the telephone about the alibi.

The second story is a long one, covering six chapters, which may prove to be an important link in the ongoing story-line, because something tells me that one particular character will come to play an important role during the end game of the series. This person has an asset that can be used as the proverbial ace up the sleeve when the inevitable confrontation with the Black Organization happens.

In any case, the story begins with Harley Hartwell and Kazuha taking Conan, Rachel and Richard Moore to East Okuho Village, nestled on the outskirts of Tokyo, where a year ago a murder case had been solved by that famous high-school detective, Jimmy Kudo. At the time, Kudo was assisted by a local teenager, Makoto Okuda, who now claims to have spotted a glitch in his deductions. And he wants Kudo to come down to the village in order to rectify his mistake.

Only problem is that Kudo has disappeared from public view ever since the events in the first volume and his current whereabouts are unknown, which is why Okuda contacted Hartwell. But, upon arrival, they learn Okuda has been missing for the past six months and the villagers snarl at them for mentioning Kudo's name. They vehemently disagree with his conclusion that the previously mentioned case was a murder/suicide that casted their beloved, late-lamented Mayor Hinohara as the murderer. 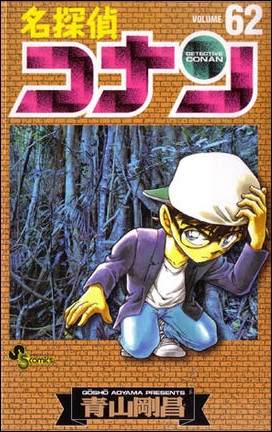 This situation becomes even more entangled when Conan vanishes from the scene and Kudo reappears on the bank of a lake, "butt-naked," but his memory appears to have been completely wiped clean as he has no idea who or where he is – even failing to recognize his friends. So this places Hartwell in a precarious situation, because he is the only of the group who's aware of the Conan/Kudo situation. And that's only the beginning of his problems!

A dense forest surrounds the village and is reputedly haunted by a Shiragami, "a guardian who punishes those who harm the land," whose presence has been felt ever since a girl died in the woods five years ago. Locally, it is believed the girl had angered the spirit by entering his domain after dark and only the reader knows for sure that someone is out there, because this Shiragami is seen lurking in the background of several panels. And to complete this cocktail of problems, Kudo is found standing over the body of a severely wounded reporter, dazed and confused, with a knife in his hand and bloodstains on his clothes. The reporter had alluded earlier to Kudo that she knew all about "the unspeakable truth" he's "trying to hide" and that gave him a rock-solid motive to attempt to silence this person. Or so it appears.

Plot-wise, this short story-arc is a mixed bag of tricks. First of all, I admired how Aoyama handled the amnesia angle of the plot, which could have turned out to be very hacky, but turned out to have a clever explanation and perfectly tied-in to real identity of the Shiragami – which did not disappoint even though I saw it coming. I was not as impressed by the explanations for the attempted murder (a mere bluff) and the past mistake in Kudo's deductions, but understand these answers were necessary in order to explain the culprit's motivation. And that is why I think we'll see this character return towards the end of the series, because the whole story feels like it was written for the sole purpose of introducing and storing away this character for later use.

Finally, the last chapter sets up a new story, which immediately follows on the events of the previous one, and stars when our troupe of detective are driving home and witness a speeding car scrapping against the guardrail. Eventually, it comes to a stop and when they check on the driver, they find a dead man behind the wheels with ligature marks across his throat. Somehow, the driver had been strangled to death, while driving, but only the victim was inside! It's an impossible crime reminiscent of Edward D. Hoch's "Captain Leopold and The Impossible Murder" (Murder Impossible: An Extravaganza or Miraculous Murders, Fantastic Felonies and Incredible Criminals, 1990).

So I'm very curious to see what kind of explanation Aoyama has found to explain how someone could have been murdered inside a moving locked room on wheels, but that revelation will have to wait until next month.
Geplaatst door TomCat on 9/29/2017