"One should not give a small child a sword under any circumstances."
- Judge Ooka (Bertus Aafjes' Een lampion voor een blinde, 1973; A Lantern for the Blind)

The Foxfire-Floating Murders is the closer of the second and currently last season of Kindaichi Shounen no Jikenbo R (The File of Young Kindaichi R), which comprises of four episodes and is a surprisingly human detective story drawing on Hajime Kindaichi's past as a boy scout cub – placing him in the conflicting position of having to ferret out a murderer among his childhood friends. 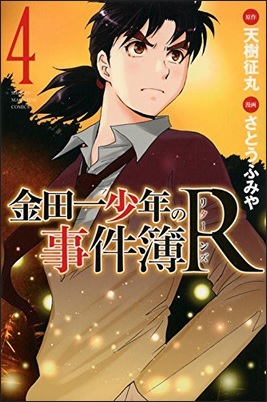 The first of the four episodes opens with Kindaichi receiving a telegram ("that's rare these days") and the slip of paper is the bearer of bad news. One of his childhood friends, Tsukie Marika, has suddenly passed away. Kindaichi and Marika were cub scouts and part of the group that went missing for two days during a camping trip in the woods, but their ordeal turned out to be nothing more than an exciting adventure for the group. Even the snake that bit one of the girl scouts, Akari, proved to be non-poisonous.

Kindaichi remembers them having plenty of fun back in those days, but the group grew apart as they got older and only kept exchanging New Years' cards over the post. So their reunion in the small village of Byakko is a joyous occasion until they learn Marika has been dead for the past two months. And she was murdered.

Two months ago, the body of Marika was found in a storehouse, "naked and wrapped in a white cloth," with "a Byakko white fox mask covering her face," which is an imagery that evoked the Japanese folktale of "the Marriage of the Fox" – something that would play a role in one of the later murders. So the local villagers fear the murder might been the result of the curse of the white fox, Byakko-sama.

Furthermore, nobody knows who sent out the invitations to the funeral or why this person waited several months with sending them out.

There is, however, one peculiarity about this early part of the story that bugged me a little bit: the characters, initially, don't appear to be really bothered by the revelation that Marika had been killed. Or that her killer has not yet been found. Shortly after they learn about the murder, they cheerfully suggest a game of cards and play soccer the following morning. Even Kindaichi, who's a detective and murder-magnet, is out-of-character by appearing less than interested in the case and even reprimands himself when something occurs to him – saying to himself that he's over thinking the matter and that "not everything is a crime." When, in fact, it is a murder case! So that struck a slightly false tone in the narrative.

However, that might just have been the tranquil effect of the village, which, admittedly, is a beautifully drawn place with a scenic tradition called Foxfire-Floating.

Every year, a young girl from the village becomes the bride of the fox and has to sit all night, dressed in a kimono and mask, on the veranda of the Byakko Inari Shrine. You can't approach or talk to the bride while she's sitting in front of the shrine. At the same moment, villagers gather at the riverbank and "float lanterns downstream in memory of the souls of the dead," which makes for a charming image. But this is also the night that Kindaichi loses two more of his old cub scout friends.

One of them, Koutarou, is found floating in an inflatable boat between the lanterns on the river with his face covered by a white fox mask. He also has been stabbed to death. The second person to die that night is Rin, who plays the role of fox bride, but the murderer propped up her body against the shrine and made it look as if she had been sitting there all the time.

The setup of the story and the discovery of the two additional murders covers the first two episodes, which also involve a pair of alibi-tricks, but these tricks are relatively simple to figure out. If you paid any attention to the lay of the land, you can (roughly) work out how the boat-trick was accomplished. Particularly in combination with the clue of the soccer ball. The alibi-trick at the shrine was as plain as day and you should be able to work out the solution based solely on the tear in the rice paper of the shrine's sliding door.

Normally, these easy tricks, in combination with a very transparent murderer, would be slightly unusual for a detective-series that has always heavily relied on complicated locked room illusions, tricky alibis and melodramatic murderers, but the gimmicks were appropriately toned down here – as not to reduce the impact of the human and personal elements of the story. And it worked!

The solution, as to be expected, played on the well-worn motif of the series, "the-avenger-from-the-past," but what keeps the viewer guessing is what, or who, had to be avenged. Obviously, the murders are linked to the camping trip of the cub scouts, but that was over seven years ago and everyone involved was an elementary school student. Several flashbacks of the trip showed nothing really happened that would warrant the death of three people years later. Or so it appeared.

Granted, not every single detail about the murderer's motive is fairly shared, but, eventually, you can make an educated guess and the truth is genuinely tragic. A string of unfortunate events that began with the maliciousness of a bunch of innocent children who had no conception of long-term consequences. The episode ends, strongly, with a teary-eyed Kindaichi wondering about the many "what-ifs" of the case that could have prevented the destruction of half a dozen lives, which includes some of his own actions.

Plot-wise, The Foxfire-Floating Murders is perhaps not the strongest, or cleverest, story in the series, but the personal and emotional ties Kindaichi has to the victims and suspects more than made up for this, but some praise should also be bestowed upon the beautifully evoked backdrop of the village with its folkloric traditions – which proved to be perfect stage for this very personal case.

So, yeah, there you have it. Once again, I fully enjoyed a story from the Kindaichi case files. I guess the age of miracles has not yet passed into the history books!

I previously reviewed the following episodes in this series: