"The point is that there are a million ways for you to die that you can't possibly guard against."
- Lincoln Forrestor (William Gray Beyer's Death of a Puppeteer, 1946)

The Rosenkreuz Mansion Murders is a five-part (episode) story-arc in the Kindaichi Shounen no Jikenbo R (The File of Young Kindaichi R) series and arguably has the best all-around story-telling and plot of all the episodes previous reviewed on this blog, which largely rests on a pair of clever locked room murders and the role played by Kindaichi's nemesis – who acts here alongside the high-school detective. And for a very good reason!

Yoichi Takato is talented magician and criminal, known as "The Puppeteer from Hell," who designs perfect crimes for people with a deep-seated grudge and controls the executioners of his schemes like stringed puppets, which he showcased in The Prison Prep School Murder Case. However, this time he has to dance to the tune of another plotter with a talent for murder. 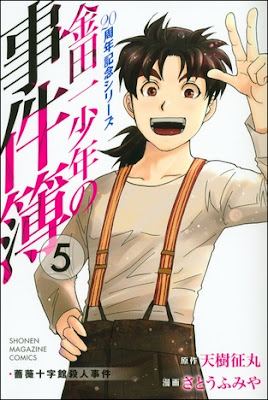 A mysterious person going by the moniker of "Rosenkreuz" is sending out invites to celebrate the completion of the Blue Rose at the Rosenkreuz Mansion, but the letter delivered to the Puppeteer also contained a threat. One of the invitees to the party is his long-lost sister and he has to attend or else she'll leave the mansion in a body bag.

So this places Takato in a precarious position and he dislikes "the thought of unseen thorns," but what he excels at is murder, "not at the inverse," which gives him the idea to slip "a joker" into whatever game Rosenkreuz has planned – namely Hajime Kindaichi. Takato strikes a deal with Kindaichi that if his sister is among the guests, and she makes out of the mansion alive, he will turn himself in to the police to atone for his past crimes. It's an offer that proved to be impossible to ignore or turn down and this gives the story a very different dynamic, because Takato acts a secondary detective.

Someone who's right next to Kindaichi to help him in every step of the investigation, but whose role always appears to have a shadow-side. As you can never be entirely sure how much of a hand he (might) have in the unfolding drama. I found this to be a pleasant divergence from the unusual, often formulaic, narrative of the series.

Takato, Kindaichi and Miyuku arrive at the mansion, which is a European-style, cross-shaped house encircled by thick, impenetrable hedges of rose bushes that could have been pulled from the Queen of Heart's hedge maze. The person known as Rosenkreuz plays the role of absentee host and only communicates with his guest through letters delivered by the butler of the mansion, Mouri Mikado. So there you have the first suspect, however, the remaining guests are also an interesting bunch.

One of the first surprises for Kindaichi and Miyuki is that their biology teacher, Shiraki Benine, is among the guests and she has shown a personal interest in (blue) roses at the opening of the episode – which she shares with the others who received an invitation. There's a CEO of a biotechnology company and a rose garden manager, but also several artistically inclined people such as a photographer, a kimono designer, an artist and a flower poet. So this nicely sets the stage for murder and the first body turns up before the ending of the first episode.

On a brief note of negativity, the first two murders were rather disappointing as the first body turned up, impossibility, on the dinner table, but this piece of cheap trickery was (thankfully) almost immediately explained. The second person died when he tried to escape from the premise by going through the rose bushes, but the thorns had been poisoned and he dropped dead on the spot. Very, very pulpy. Luckily, these two murders did not set the tone or quality for the remaining four episodes.

The third murder is discovered when a note by Rosenkreuz commands everyone to come to the circular reception room on the north side, where he will reveal "the blue rose," but what they discover is a locked room and they make a gruesome discovery when they inspect the outside windows – inside lays the body of man on a cross-shape bed of flower petals. A wooden stake has been driven through his heart!

What makes this murder an impossible one is the door, which opens inward, but the flower bed, placed all the way up to the threshold, was undisturbed. So how did the murderer closed the door without sweeping the lower part of the petal cross into the hallway outside? The explanation proved to be as a good and novel as the locked room situation, which combined the flower motif of the story with certain aspects of the murder room to great effect.

I believe this is the kind of trick John Dickson Carr or Joseph Commings would have admired and something Yozaburo Kanari would love to pass off as his own.

The second impossible situation is of a different order altogether: a woman is being attacked in a room that can only be reached by taking a large detour around the house (some short cuts were boarded up). When they reach the section of the mansion, where the room is situated, the only person they find there is Takato and he swears nobody had passed while he had been standing there – which makes the murder they discover in the room an impossible one. The trick is yet another variation on the idea Seimaru Amagi played with in The Prison Prep School Murder Case and The Kamikakushi Village Murders from Detective Academy Q, which even uses a similar sun-light clue.

Obviously, Amagi loves the idea of this trick and gets a ton of mileage out of it. Sure, it's an idea with a lot of possibilities and has barely been looked at by Western mystery writers (except for Paul Halter), but, in this case, I believe the first locked room trick is superior to the second one.

Anyhow, the combination of a collaboration between two enemies, Kindaichi and Takato, and a pair of excellently imagined impossible crimes is what, largely, made The Rosenkreuz Mansion Murders my favorite story from this series. But the identity of the (somewhat obvious) murderer and the underlying, hidden relationships were also of interest. As to be expected, there was the good old avenger-motif at the heart of the case, but this time there was an extra dimension to the motive as it answered why Takato had to be present and what the murders had to do with his sister. Fascinatingly, this showed the story was written around several characters with parallel relationships, which recalled similar, sometimes mirror-like, relationships found in Gosho Aoyama's Detective Conan (or Case Closed).

All of these parallel relationships, rose-themed clues and two locked room illusions that took full advantage of their surroundings created some beautiful plot-patterns together. The Rosenkreuz Mansion Murders completely exorcised the dispiriting disappointment left behind by The Legendary Snow Demon Murders.

Hopefully, the next story will be able to maintain this level of quality. So I guess it will be a coin toss between The Death March of Young Kindaichi and The Foxfire-Floating Murders. Any and all recommendations are welcome!
Geplaatst door TomCat on 6/17/2017