"Knowledge is progress. We gain knowledge through observation and logic—inevitable logic. And logic tells us that two and two make four—not sometimes but all the time."
- Prof. Augustus S.F.X. van Dusen (Jacques Futrelle's "The Leak," collected in The Jacques Futrelle Megapack: Tales of the Thinking Machine and Others, 2013)

Henry Leverage's name is little-known today and even the GAD Wiki doesn't have him listed among their legion of obscure mystery writers. However, he filled the popular slick and pulp magazines of his day, such as Cosmopolitan, Black Mask, Argosy All-Story and Detective Story Magazine, but what set Leverage apart is that his career, as a writer, really began when he was an inmate of Sing-Sing Prison – where he fulfilled the duty of editor of the prison magazine, The Star of Hope.

The scant crumbs of information on the web does not mention the reason for Leverage's incarceration, as you don't "interrogate a prisoner concerning his past," but he was released in 1919 and used his personal experience to write "crook fiction." In 1925, he created a unique-sounding series-character, Big Scar Guffman, who is a prisoner serving "a life sentence plus fifteen years" and struck me as a hardboiled counterpart to the usual assortment of charming thieves, conmen and swindlers found in rogue fiction.

Despite his proclivity for stories that center around criminals and prison inmates, Leverage wrote (at least) one cerebral detective novel in the tradition of the American mystery writers who valued ratiocination. 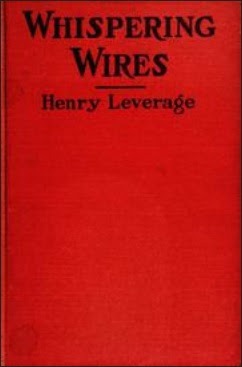 Whispering Wires (1918) was published almost a century ago and must have been written when Leverage was still behind bars, but the plot of the story is genuine interesting and stands on the border dividing two distinct periods in the history of the genre – namely the Doylean Era of crime-fiction and the coming Golden Age. Good news is that the Golden Age-like elements have the upper hand here. The story plays entirely fair with the reader and one of the main focal points of the plot is an apparently impossible murder.

A locked room mystery boosting a solution that must have been very impressive and novel for the period, but I am getting ahead of myself here.

Triggy Drew is a private-investigator who operates "the greatest city of the modern world," New York City, who did not "overrate his own powers" and built a reputation on hard, solid work. He wasn't always perfect at the job, but good enough to net him a wealthy client who always called on him when he needed a detective.

Montgomery Stockbridge is a Munitions Magnate and the first time he had hired Drew was to track down an absconder, which he did to the full satisfaction of his employer. So when Stockbridge went up against Mortimer Morphy, "the Wolf of the Ticker," Drew was tasked with gathering evidence proving "the gentleman bank-wrecker" had appropriated large amounts of money and wrecked a score of homes – culminating with a conviction at the end of a long, drawn-out court battle. When he was sentenced to ten to twenty years in state prison, Morphy swore he would get back at Stockbridge "if it took the longest day of his life." And a bizarre death-threat brings Drew back into the employ of Stockbridge.

Someone used the name of Stockbridge's physician to order the superintendent of Ridgwood Cemetery to have a grave dug in the family plot, because "a death was about to occur in the Stockbridge family." A threat punctuated by a whispering voice over the telephone promising that they would go after his daughter, Loris, as soon as they were finished with him. So Drew takes the case and leaves his client behind inside a sealed room, a "double-locked and triple-watched library," but, at the end of the day, they're forced to take an ax to the sturdy library door.

The telephone in the library was engaged, but Stockbridge remained unresponsive and when the ax had done its work they discover why: Stockbridge lay crumpled on the floor with a gunshot wound to the side of the head and the only living presence in the library was his pet magpie – screaming, "Ah, Sing," over and over again. So how did the murderer entered, or exited, a sealed room? A room with thick walls, a hardwood floor and a smoothly plastered ceiling. One with all the windows and doors securely locked from the inside and closely watched from the outside.

As one of the characters observed, the shooting of the Munitions Magnate appears to be a complete and utter impossibility!

I mentioned earlier on this review how the book fits within the tradition of the American detective story of the ratiocinative variety. Leverage makes several allusions to Edgar Allan Poe, as he refers to the impossible murder as "a second Rue Morgue" and described the magpie "as stately as a raven" who seemed to crow "Nevermore," but there are also, what I believe to be, several subtle nods to Jacques Futrelle – who's known as the creator of the Thinking Machine.

The Thinking Machine is known to snap at everyone who dares to suggest a problem appears to be an impossible one, because "nothing is impossible." Drew gave a similar response by stating that there's no such word and invoking it is "a fool's excuse." You can add to that a character who's plotting behind bars (c.f. "The Problem of Cell 13," 1905) and the technical nature of the solution, which is reminiscent of Futrelle's scientific-and technological based detective stories.

So I found it intriguing to see the (possible) influences of these two early, pre-GAD writers on a detective story is, essentially, a Golden Age mystery. Well, for the most part anyway.

Another element that makes Whispering Wires a Golden Age-style tale of ratiocination is the presence of several clues that, when spotted, reveal the whole truth behind the murder. You should be able to the deduce the who-and how of the murder based on the clues hidden in the story. Once you grasp the truth behind the locked room trick, you should be able to deduce the well-hidden murderer, because the nature of the trick and motive leaves only one possible suspect. Admittedly, the identity of the murderer is less interesting than how this person to shoot someone in a sealed and watched room, but they nicely tied together by the clues. So you really have no excuse to not get it right with this one.

Some of you might dismiss the book, based on my review, as being too transparent, but keep in mind that the passage of time has dulled the originality of the plot. The technical side of the story, such as the crossed wires and smooth bullets, is not as exciting to us jaded, modern-day readers as it probably was to the average reader of 1918 – when telephones had just experienced its first commercial growth and the cleverest detective stories were still ahead of them. I can imagine readers at the time being impressed by the plot and the innovations it contained. After all, a "threat-by-wire" was a new and novel way of telling someone they were going to enjoy the unwelcome comforts of an early grave. We take instant death-threats for granted today! ;)

Additionally, the readers were given a very real shot at solving the problem of the locked room and identifying the shooter themselves. Sure, the clues are easier spotted today than they were back then, but even then they were planted in the text for the observant reader to find and interpret. And that's pretty nifty for a mystery published in 1918.

Long story short, I liked this simple, straightforward and well-clued detective novel with a locked room murder that slammed the door on all hoary, moth-eaten bag of tricks from the previous century. No secret passages of trained, gun-wielding monkey within the pages of this yarn!

So, if this overlong, semi-coherent babbling managed to produce a spark of curiosity, you can pull Leverage's Whispering Wires from Gutenberg and read the story for yourself.

Oh, a final note of warning: try to avoid looking at the original book cover. It spoils an important part of the solution. The reader has been warned!
Geplaatst door TomCat on 6/04/2017