"Crimes 're committed by people. There ain't nothin' impossible about it! What are ya stupid?"
- Harley Hartwell a.k.a. Heiji Hattori (Gosho Aoyama's Case Closed, vol. 50)

Last Sunday, I posted a review of my third foray into the Kindaichi Shounen no Jikenbo R (The File of Young Kindaichi R) series, The Alchemy Murder Case, which closely followed the formula established in the original incarnation of the series, but the plot had a grand and original locked room illusion – a two-sided trick that also explained the secret behind the vanishing of a gigantic sword. So it was the third (episodic) story in a row that did not end in disappointment. 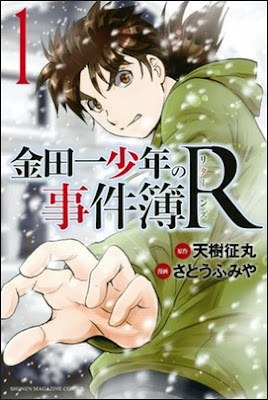 But than an old friend of this blog, "Origami," turned up in the comment-section and jinxed my epic rediscovery of the series. Oh, yes. This is going to be a good, old-fashioned bashing of Kindaichi.

The Legendary Snow Demon Murders is stretched across four episodes and takes place against the endless, snow-capped mountain tops of the Snow Goblin Ski Resort, which has recently been developed by an investment group and a handful of people have been selected for a trial run – including the protagonists of the series, Hajime Kindaichi and Nanase Miyuki. However, they're present at the resort as part-time workers to help take care of the testers. And, as to be expected, there's a dark, bloody history attached to the place.

On New Years Eve, 50 years ago, the now long-abandoned mountain village was visited by the legendary Snow Demon, who left behind a trail of blood and empty houses, but the remains of his many victims were never recovered. Everyone in the region believed that the missing villagers had all been "eaten by the Snow Demon." Well, so far, so good. But not for very long.

The legend of the Snow Demon and the miraculous vanishing of his victims enters the picture when one of the guests, Kumosawa Natsuki, disappears from her log cabin without leaving a single footprint in the large, unbroken blanket of virgin snow outside – which had began to fall when she had retired and stopped when she was discovered to be missing. She had been spirited away! An unlikable guest and "creepy otaku," Sabaki Kaito, disappears during the second episode, but his body is found and vanishes again, which is the point where the story begins run out of fuel.

A large swath of the second episode and pretty much the entirety of the third is nothing more than filler material. And not very good filler material at that!

There are two basic, and simplistic, problems at the heart of these two episodes: the (non-impossible) disappearance of Sabaki's body from a casket and who flung a bloodstained meat-cleaver through the window of the main cabin when everyone was alibied. The answer to the first problem is a reworking of a cheap, dime-store magic trick, but with a body and casket replacing the coin and small box, while the meat-cleaver trick is embarrassingly childish and bad – even the Ayatsuri Sakon series would have shied away from using it.

So, I was thoroughly unimpressed with the plot, but hoped that the explanation of the impossible disappearance would save the episode. After all, I had my doubts about the previous episodes I watched and they turned around in the end with some splendid solution. Well, that did not happen in this case, I'm afraid.

Sure, the explanation for the impossibility is, in principle, an excellent one that might also be completely original, but I had two problems with it (you can re-reverse, or decode, the spoilers with copy-paste here):

As to be expected, the who-and why behind the killings weren't particular ingenious, innovative or very surprising, because the murderer's identity and motive were written around the avenger-motif used in nearly every single story in this series. I suppose the choice of the murderer was the only notable aspect of the plot, since this person was below suspicion, but hardly enough to save this dull, slow-moving episode stuffed with mostly second-and third-rate tricks – which triggered traumatic flashbacks to my first encounter with this series. The original Kindaichi series is like my 'Nam or something.

Surprisingly, this blog-post turned out to be not half as harsh as even I expected it to be. I'm disappointed, more than anything else, because the premise and main trick of The Legendary Snow Demon Murders had potential, but everything ended up being half thought-out or completely wasted. Such as the horrible filler material and the series formula didn't do the story any favors either. However, this will not deter from continuing with the series and you can probably expect a review of The Rosenkreuz Mansion Murders next. That's a good one, right?

On a final, unrelated note: allow me to draw your attention to my previous review of Stacey Bishop's Death in the Dark (1930), which is a very rare detective novel that has recently been reissued and the plot toys around with no less than three impossible crimes! So you might want to take a peek at that review. By the way, the next review will be of a non-impossible crime novel. Yes, I'm still aware of their existence! :)
Geplaatst door TomCat on 6/14/2017