Let There Be Light

"Nothing has 'just happened' in this case. There's a terrible logic about everything--a carefully planned reason behind each detail. Nothing has been left to chance. Still, this very systematization of the crime will eventually prove the murderer's downfall. When we can find a key... we'll know our way into the main chamber of horrors."
- Philo Vance (S.S. van Dine's The Greene Murder Case, 1928)

George Antheil was an avant-garde composer and authored one of the rarest locked room novels in the genre, Death in the Dark (1930), which he published under the nom-de-plume of "Stacey Bishop" and was written as a roman à clef, but others have described the book as "an act of revenge" - since all of the victims are fictional substitutes of people who had drawn the ire of the author. 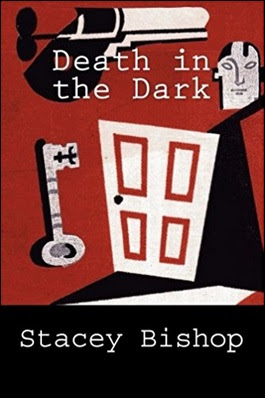 During the American debut of Antheil's signature work, Ballet mécanique, several elements of the performance turned rogue, which resulted in "an unmitigated disaster." The critics were savage and the composer returned to Europe with a blemish on his name. Several years later, Atheil poured all of his anger into the pages of a detective novel and used it as a vehicle to murder "everyone he held responsible for the catastrophe."

Remarkably, there were a couple of high-profile names, such as Ezra Pound and T.S. Eliot, who had a guiding hand in the creation of this strange piece of detective fiction. So the book has a great back story and a literary pedigree, but how does Death in the Dark stand up as a detective story?

As the late Robert Adey correctly observed, the book is "an extraordinarily complex work" and "a combination of the worst and best elements of the thirties," which are woven into an intricate webwork of plot-threads with three apparently impossible shootings at its core – dressed and padded with chatter about art, music and science. On the surface, it might appear as if Death in the Dark is a typical work from a student of the Van Dine-Queen School of Detective Fiction, but Antheil really stands out among his classmates. Such as the inclusion of some weird, science-fiction-like laboratory scenes that some have likened to Fritz Lang's Metropolis (1927).

So the plot is a rich one and crammed with all kind of material, which almost makes this a heavy, baroque-style mystery novel and requires a fully attentive reader. And this may also be the greatest weakness of the book. There's so much here that the effect of certain elements (like the impossible shootings) are weakened. But lets begin at the beginning.

Death in the Dark is narrated by Stacey Bishop (of course!) and is a close friend of Stephan Bayard, who is "wedded to the modern arts," but, like Philo Vance, picked up criminology as a hobby and has assisted the police on several occasions – such as "the celebrated Lanoucin case in Paris." So when the Public Prosecutor of New York, Howard Wayson, called they hurried to the scene of a "devilish and diabolical" crime.

The scene of the murder is the apartment of Dave Denny, an "extraordinary young concert manager," who has been shot under inexplicable circumstances in his bedroom.

When all those present were distracted by either several fire engines outside or engrossed in a book (see map), someone turned off the lights and fired a shot from the hallway into the victim's bedroom. A perfectly aimed shot that hit Denny dead square in the forehead, but the room was pitch-dark and to deliberately shoot with such incredible accuracy seems utterly impossible under the given circumstances.

Interestingly, during the initial stages of the investigation, Bayard's pet theory betrays a level of fallibility not often associated with detective-characters cut from the same cloth as Philo Vance.

Based on a nick in the bathroom door, Bayard believes Denny used an elaborate method to take his own life and throw suspicion on those present in the apartment, but the theory becomes untenable as evidence begins to pile up around him. One of the monkey wrenches in this theory is the key to the front door. A key that should be on a hook next to the door, but, every time something happens, it is found stuck in the lock. The infernal key also proves to be stumbling block in a case of murder.

Speaking of murder, there are two additional shootings under equally impossible circumstances: one of the family members is shot dead in the middle of the living room, while surrounded by the police, but nobody saw the shooter and the gun is found in the bedroom – where two days previously Denny had been murdered! A third member of the family is arrested and locked up in a police cell, but the killer even managed to breach the police security and shoot another person in the face.

I agree with John Norris' opinion that the police cell murder has the cleverest, if gimmicky, explanation of the three locked room problems, which actually provided me with the idea for the title of this blog-post. You'll snicker or grin when you learn its significance, I promise! Only downside is that the prison cell murder, out of necessity, is explained away almost immediately. It would simply not be acceptable if took until the end of the book for the investigators to figure out how the trick was done. 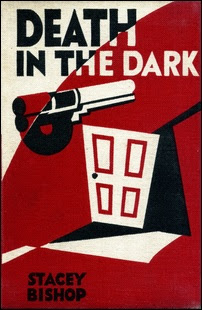 The first two locked rooms are of a lesser quality than the last one, but my only real problem is with the second shooting in front of several witnesses.

Technically, the trick is feasible enough and would probably work. However, you have to wonder whether a shot could really be fired, under such difficult circumstances, without anyone noticing from whose direction it came, but what really bugged me is that a golden opportunity was passed over to turn this bizarre shooting into a full-blown locked room mystery, which could easily be done with most of the present elements – such as "a resounding crack on a door in the hallway" and the gun on the bed.

Only thing that needed to be added is that someone noticed a streak, or a shadow, fleeing into the hallway and act upon it. But all they would find is a gun in the bedroom and a murderer who vanished from a locked and watched apartment. If you know how the trick in the book is worked, you'll know how well this addition to it would work. It would create two impossibilities (shooting and vanishing) with one single trick!

So that missed opportunity at crafting an ever better impossible problem was somewhat bothersome. Nevertheless, it was fun to read how Antheil toyed around with the possibilities for all of these impossibilities, which is always a treat for locked room fanboys like yours truly.

I also appreciated the ways in which the problems were approached, which on one occasion strayed off the well beaten track. There's the customary interviews, theorizing and the compilation of several fact sheets (graded facts, time charts and a floor plan), but in addition to these Bayard wrote "poems" for all three impossible shootings explaining why they're so damned impossible. They add to the overall peculiarity and oddness of the book. Still, the tabulations and "poems" also bring clarity to the complex plot by placing all of the known facts and clues in an ordered list. And these lists did strengthen some of the most important clues to the identity of the murderer. So there's that.

Well, I guess I should conclude that Death in the Dark is a strange, uneven detective novel brimming with the weird and unusual elements, but clever and consistent enough to succeed as a proper (locked room) mystery. Sure, the book is not in the same league as the classics of its form, however, you could place it easily alongside other alternative locked room classics such as W. Shepard Pleasants' The Stingaree Murders (1934) and Joseph B. Carr's The Man with Bated Breath (1934).

So, a long, rambling story short, I liked Death in the Dark. Maybe more than I should have, but liked it nonetheless.
Geplaatst door TomCat on 6/12/2017