The Tormented Bookshop: "The Case of the Murder on D. Hill" (1925) by Edogawa Rampo

Hirai Tarō is the father of the Japanese detective story and choose as his nom-de-plume a phonetic rendering of the name of the progenitor of the genre, Edgar Allan Poe, which translated to Japanese is "Edogawa Rampo" – whose work he greatly admired and developed in "a distinctly Japanese form." Rampo graduated from Waseda University in 1916, but had to work a series of odd jobs until Shin-Seinen (New Youth) published his first short story, "Nisendōka" ("The Two-Sen Copper Coin"), in 1923. A story inspired by Poe's "The Gold Bug" (1843). 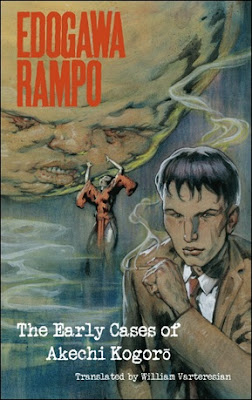 "The Two-Sen Copper Coin" was the first step Rampo took to become the Founding Father of the Japanese detective story, but historically, one of his most important stories was published a few years later.

"D zaka no satsujin-jiken" ("The Case of the Murder on D. Hill") was originally published in the January, 1925, issue of Shin-Seinen and collected in The Early Cases of Akechi Kogorō (2014). Rampo wrote the story to disprove the claim that it was impossible to set "the secret incidents and mysterious dealings," forming "the core of the modern Western mystery," in "the open, wood-and-paper houses of Japan" – prophesying that the country will never produce a strong mystery tradition of its own (ha!). So he proved them wrong by constructing a locked room mystery set in one of those houses of paper and bamboo with sliding doors and tatami-matted floors.

However, the impossible murder in a secondhand bookshop is not what gives "The Case of the Murder on D. Hill" its historical status, but that it introduced the first iconic Japanese detective, Akechi Kogorō. I also think the story is, historically, interesting as an early example of the double solution reasoned from the same (physical and psychological) evidence. Anthony Berkeley would have loved this story for more than one reason!

"The Case of the Murder on D. Hill" is narrated by a young man, just out of school, but without work and idles away his time reading at his boardinghouse or staring out of the window of an inexpensive café, The Plum Blossom House, where he became acquainted with Akechi Kogorō – who charmed him with "his love of detective fiction." One day, they notice something irregular going on at the secondhand bookshop opposite the café. When they go to investigate, they discover the murder of the bookshop owner's wife. She had been a childhood friend of Akechi.

Only problem is that every entrance, or exit, was under observation by reputable witnesses and nobody was seen entering, or leaving, the secondhand bookshop at the time of the murder.

Regrettably, the identity of the murderer and solution to the locked room murder were uninspired, but where the story briefly became a genuine classic was when the narrator began to unfurl his solution to the crime. A solution brilliantly accusing Akechi (!) based on such clues as fingerprints on a light switch, a striped yukata (kimono) and the murderer's apparent ability to become invisible. Only other example of a false solution leveled against the detective that I can think can be found in Berkeley's masterly done Jumping Jenny (1933).

The translator of The Early Cases of Akechi Kogorō, William Varteresian, noted in his introduction that Rampo wanted to be "judged and considered on the same terms as those of prominent Western authors."

So, when stacked up against its Western counterparts of the period, "The Case of the Murder on D. Hill" is (plot-wise) a very minor work with only two distinguishing features: a correct and false solution that were extracted from the same evidence and the "disgraceful behavior" that provided a morbid motive for the murder. A motive that would certainly have raised some eyebrows in the Western world of 1925. However, in Japan, this story was as important as Poe's "The Murders in the Rue Morgue" (1841), Sir Arthur Conan Doyle's A Study in Scarlet (1887) and G.K. Chesterton's The Innocence of Father Brown (1911). Recommended to genre historians and readers interested in the history of the genre.
Geplaatst door TomCat on 9/18/2019