Over the past nine months, I've read and reread a spate of Japanese detective novels and short stories by such mystery writers as Takemaru Abiko, Rintaro Norizuki, Edogawa Rampo, Soji Shimada and the man with the palindromic name, "NisiOisiN" – coming in addition of my regular reading of manga series like Case Closed, The Kindaichi Case Files and Q.E.D. So why not continue this trend and revisit a particular title I wanted to reread ever since reading John Russell Fearn's The Tattoo Murders (1949). 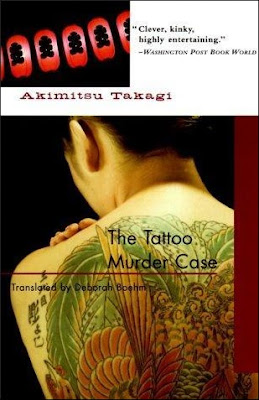 "Akimitsu Takagi" was the penname of Seiichi Takagi and worked for the Nakajima Aircraft Company during the Second World War, but lost his position when the company had to close down when the Occupational Military Government (US) banned all military industries in Japan. Reportedly, Takagi decided to become a writer on the advice of a fortune-teller.

So, along with his contemporaries, Tetsuya Ayukawa and Seishi Yokomizo, Takagi became one of the pioneers of the original, distinctly Japanese honkaku-style of detective fiction.

Shisei satsujin jiken (The Tattoo Murder Case, 1948) is, as Ho-Ling Wong perfectly described it in his own review, "a surprisingly well-polished debut novel" takes place against the backdrop of the messy, bombed-out ruins, shuttered buildings and makeshift shops of post-war Tokyo – where "ragged crowds" meander aimlessly and mingle with American soldiers. After sunset, the rubble-strewn streets "teemed with prostitutes, petty criminals and vagabonds" with occasional gunshot shattering the "uneasy silence of the night." However, the plot is deeply rooted in that "shadowy, sensual world" of tattoos and this is "the tragic story of three of those tattoos."

Horiyasu was a famous tattoo master with three children, Kinue, Tamae and Tsunetaro, two daughters and a son, who he tattooed with one of the most taboo of all tattoos, the Three Curses.

The Three Curses is the legendary tale of three sorcerers, Tsunedahime, Jiraiya, and Orochimaru, who lived in the depths of Mount Togakushi, in Nagano Prefecture, where they competed "to see who could create the wickedest, most powerful spells." Sorcerers are closely associated with three large creatures: Tsunedahime rides on an enormous slug, Jiraiya on a giant toad and Orochimaru has a huge, long snake. According to the superstition, the tattooing of a snake, a toad and slug on the people with the same blood flowing through their veins, like siblings, "the three creatures would fight to the death" – which means Horiyasu placed a deadly curse on his three children. Tamae and Tsunetaro were killed in the war. Kinue has no reason to be believe her full-body, Orochimaru tattoo will allow her to live a long, prosperous live.

Professor Heishiro Hayakawa is better known as "Doctor Tattoo" and is the curator of the beautifully macabre collection of "vividly colored, intricately-tattooed skins hanging on the walls" or "suspended from the ceiling" in the Specimen Room of Tokyo University. Professor Hayakawa works hard to expend the collection and considers Kinue's tattoo to be a national treasure, wishing to preserve it for posterity, but she keeps turning down the old "skin-peeler." Uncharacteristically, Kinue takes part in a competition of the first post-war meeting of the Edo Tattoo Society and there she meets Kenzo Matsushita. 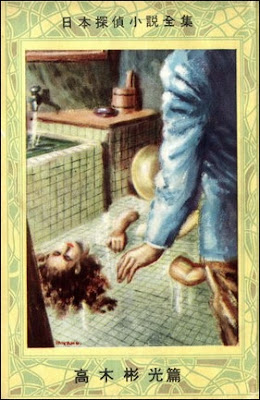 Kenzo Matsushita is a graduate student at the medical school of Tokyo University, where he studies forensic medicine to eventually join the police medical staff, because his older brother is Detective Chief Inspector Daiyu Matsushita of the Metropolitan Police Department. So he attended the exhibition purely out professional curiosity and bumps into an old high-school friend, Hisashi Mogami, whose brother, Takezo, is married to Kinue and their uncle is Professor Hayakawa! And this is where the trouble really begins. Kenzo falls hard for Kinue, as if "bewitched by foxes," and they begin a short-lived, but passionate, relationship cut short by her murder.

Kenzo and Professor Hayakawa find, whatever remained, of Kinue in her bathroom: a severed head, two forearms and two long legs from the knees down were laid out on the tile floor, but the body's torso was missing and the murderer apparently vanished into thin air – because the horizontal bar on the door was firmly pushed in place and the window was tightly locked from the inside. A murder as gruesome as it's utterly impossible!

I first read The Tattoo Murder Case in 2006, or 2007, which was one of my first Japanese detective novels and remember liking it, but the book has gotten its share of criticism over the years. A notable example is the tepid, two-star review by "JJ," of The Invisible Event, who called the book a mix bag. So this was another reason why I wanted to reread the book. Honestly, I liked the book on my first reading, but loved it the second time around (sorry, JJ!). The Tattoo Murder Case is such a fascinating, richly detailed and smartly plotted detective story. That being said, some of the criticism is not entirely unfounded.

Firstly, the solution to the locked room puzzle is a mechanical variation on an age-old trick and recalls an impossible crime from a well-known American writer, which was handicapped by being poorly motivated (you had a point there, JJ). Nonetheless, I thought it was a clever variation that made good use of the bathroom setting. Ho-Ling pointed out in his previously mentioned review that the impossible crime element is historically important, because the story is set in a Japanese-style house that "pre-war critics thought to be unsuitable for locked room mysteries" and The Tattoo Murder Case was one of the first counter arguments.

The explanation as to how the murderer removed the tattooed torso from the locked bathroom even had a glimmer of Chestertonian brilliance! 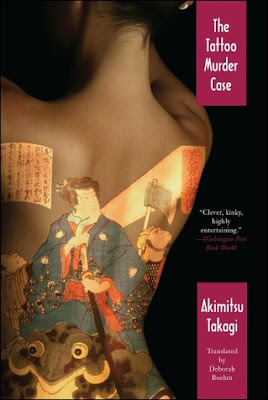 Secondly, the story is, while not great, competently plotted with some genuinely inspired bits and pieces, but weren't always utilized to their full potential – showing a promising, but inexperienced, mystery writer. A good example is the back-story of the cursed tattoos and how the murder is supposed to look like the fulfillment of a curse, but this aspect is never played up. This would have been a very different story in the hands of John Dickson Carr, Paul Halter or Hake Talbot! Another problem is that the small selection of Japanese mysteries available in English comprises largely of novels with often more ambitious, better executed and original plots. If I would compile a top 10 of translations, The Tattoo Murder Case would be in the bottom five, but still good enough to make the top 10.

Takagi didn't simply use "the world of sharp needles and vermilion ink" as an immersive, vividly colored canvas to play out a detective story in front, like a stage set, but the history and superstitions of this world provided clues, answers and even clever bit of misdirection to the plot. Particularly the historical bits, character backstories and the outside, post-war malaise that had shattered the old order makes for engrossing reading. Another point of historical interest is the detective of the story, Kyosuke Kamizu, who appears very late in the game.

Two months later, the murder of Kinue remains unsolved and two additional bodies have been found in abandoned and burned-out buildings. So Kenzo decides to consult an old school chum, Kyosuke Kamizu, who as a youth of nineteen spoke six foreign languages and was christened by his fellow students "Boy Genius" – a nickname he always despised. Now he does special research in forensic medicine at the Tokyo University Medical School. Kyosuke appears to have been created as a younger and more likable version of S.S. van Dine's Philo Vance, but I recognized in him a rough prototype of the high-school/university student detectives that dominate so many anime-and manga mystery series.

Kyosuke makes quick work of the locked room problem and solves the whole case in the last one-hundred pages with his pet theory of "criminal economics." A satisfactorily conclusion to a (historically) engrossing detective story.

The Tattoo Murder Case is a mystery rich in history with an, especially at the time, original and a well-done plot, which has since been overshadowed by translations of his shin honkaku decedents. But that only adds to the story's historical importance and interest. If I were to compile a Haycraft-Queen-like Cornerstones of the Locked Room Mystery, The Tattoo Murder Case would be on it. So, long story short, I really liked it.
Geplaatst door TomCat on 9/29/2019