La montre en or (The Gold Watch, 2019) is the latest mystery novel by that fabricator of miracles, Paul Halter, which is a unique title in his body of work as it was not originally published in French, but preceded by publications in English, Japanese and Chinese – giving non-French readers an exclusive. Halter dedicated the book to Chinese author, translator and publisher, Fei Wu, who had "subtly persuaded" him to write this story. So my assumption is that it was Fei Wu's idea to give the book this uncommon publishing route. 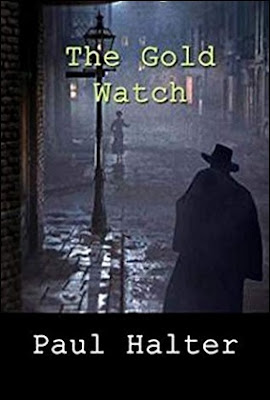 The Gold Watch is certainly worthy of special treatment, because it's one of Halter's most intricately plotted detective novels, intertwining two parallel stories, playing out on opposite ends of the previous century.

The story opens with a prologue set in October, 1901, in which an elderly woman loses her precious gold fob watch in a rainy street and is then pursued by "a furtive figure" into a dark passageway. A strange, lonely scene witnessed through a rain-streaked window by a ten-year-old boy who later said the woman had looked at her own house as if it had "turned into a pumpkin." There are two, thickly woven strands that make up the remainder of the plot, a past and a contemporary narrative, which respectively take place in 1911 and 1991.

In the past narrative, the principle players are Andrew and Alice Johnson. Andrew Johnson began his career as a Bohemian artist, but one of his colorful paintings caught the artistic, sensitive eye of the director a fabric importing company, Mrs. Victoria Sanders – who made him "a very attractive offer of employment." He accepted and rapidly climbed to the position of deputy director the London-based company. Mrs. Sanders invited André and Alice to stay with her at Raven Lodge for a long weekend.

Raven Lodge is an imposing, old-fashioned country house standing at the wooded edge of the tiny village of Broomfield and a comfortable spot to spend a long weekend during the "glacial beginning," but the Johnsons aren't too thrilled about the other invitees. Daren Bellamy is an arrogant, good-for-nothing parasite who leeches off his sister, Mrs. Sanders, but she can't bring herself to disown him or side against him. And warns Andrew to understand her position. Cheryl Chapman is Andrew's secretary and a former model who has posed nude for him, which Alice discovers when she sees the painting in Mrs. Sander's bedroom that landed Andrew his lucrative job opportunity.

Cheryl and Daren get on swimmingly, but, when they decide go for a walk in the snow, they come across the body of Mrs. Sanders. She appeared to have tripped and cracked her skull on a stone, which is corroborated by the single line of footprints in the snow leading up to the body, but Inspector Wedekind is aware that the victim's unsavory brother is about "to inherit quite a packet" – which makes him think this accident is "a perfect crime in the snow." So he dispatches a telegram to that dandy aesthete, Owen Burns, who appreciates murder as a fine art. And he attaches great importance to the missing copy of Robert W. Chamber's The King in Yellow (1895).

The plot-threads that form the 1911 story-line is interspersed with the narrative from 1991, in which a promising playwright, André Lévêque, is obsessed with finding an obscure suspense movie he only remembers seeing fragments of as a child and college student. A clutter of fragmentary memories of scenes of a house in the rain, a roving figure, a door-knob slowly turning, a close-up of a terrified old woman and there was "a strange, macabre detail on the ground" – a shiny, precious object. Now these fragmentary memories seem to be causing a serious case of writer's block.

So with the full support of his wife, Célia, he consults with a local psychoanalyst, Dr. Ambroise Moreau, who agrees to help him bring his distant memories back to the surface, identify the long-lost film and track down a copy. Dr. Moreau warns André that these vivid images from the film may be connected to other, more painful, memories that he has buried deep in his subconscious. There's an impossible crime here as well. One that was committed in 1966.

André saw the trailer of the film at the home of his childhood friend, Guy Lamblin, who was the only one of his friends whose family owned a television set. Janine was Guy's mother, but she unexpectedly died when accidentally falling from the top of an old quarry. She had been walking with her husband and some friends, but when she was standing apart from them, near the edge, they suddenly heard her cry. And they had to watch as she plunged fifty feet to her death. It had to be an accident, because nobody was standing near her.

This is the point where the plot becomes a little bit tricky to discuss, but I can say that the impossible crimes occupy opposite ends of the quality scale.

I think Halter imagined a clever and creative variation to explain away the no-footprints scenario in the murder in the snow, which is quite intricate and involved, but avoided becoming too convoluted and incomprehensible. Admittedly, the maps helped enormously in building a crystal clear imagine in my mind how the trick in the snow was worked. On the other hand, the solution to the impossible push from the top of the old quarry is relatively simplistic, but also utterly banal and disappointing – something you would expect from the pulps. However, the who, why or even how of these crimes is not the best and most fascinating aspects of The Gold Watch. It's the firm, ice-cold grasp time appears to have on the characters and events in the story.

Halter stretched the plot of The Gold Watch across nearly a whole century with the continues presence of gold fob watches as the only mysterious constant in an ever-chancing landscape, which appeared to drag and trap the characters in a weird time-well or ripple. What I liked even more is how time seemed to accelerate as the overall story progressed. The Gold Watch started out as a normally paced detective story, but slowly, the clock hands began to tick faster, and faster, until it dramatically exploded in full melodrama. I was reminded of a tightly wound-up, aggressively ticking cartoon clock that explodes and spits out its mechanical innards. I found the effect to be very pleasing.

But then again, I'm a sucker for these sadly rare detective stories distorting or shattering the perception of time. This is why I loved Christopher Bush's Cut Throat (1932), Halter's L'image trouble (The Picture from the Past, 1995) and the criminally underrated Jonathan Creek episode Time Waits for Norman (1998). Hopefully, I haven't jinxed The Gold Watch by saying that, because I hold a minority opinion on all of them. Seriously, there are only two or three other people who like Time Waits for Norman.

Obviously, The Gold Watch is now one of my favorite Halter mysteries, which is a fascinating, time-shattering detective story with an excellently positioned and executed impossible crime, but even more impressive is how beautiful all the plot-strands, decades apart, interacted and were pulled together – proving that murder can be a fine art. Highly recommended!

A note for the curious: celebrated French anthologist and impossible crime enthusiast, Roland Lacourbe, has an off-page cameo in the 1991 story-line.
Geplaatst door TomCat on 9/12/2019