Last year, I read The Fort Terror Murders (1931) by Francis van Wyck Mason, an importer, historian and writer, who saw battle as a sixteen-year-old artillery officer in the First World War and served as a Chief Historian on General Eisenhower's staff during the Second World War – where he was tasked with documenting the war. Van Wyck Mason's wartime experiences left an indelible mark on his writing. 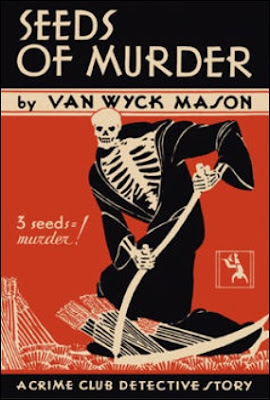 The first period covers the fourteen novels published between 1930 and 1940, which have the word "murder" or "murders" in their title and "tend to have elements of the Golden Age detective story," but the second period moved away from detection towards more spy-oriented intrigue novels – starting with The Rio Casino Intrigue (1941) and ending with The Deadly Orbit Mission (1968). Apparently, the second period stopped using gorgeous "location maps" such as the layout of the star-shaped fort in The Fort Terror Murders. What a shame!

Another anonymously posted comment confirmed my suspicion that the first title in the series, Seeds of Murder (1930), is a traditional, Golden Age detective novel complete with a Dr. Watson-like narrator, odd clues, charts and a floor plan. Surprisingly, the story turned out to be an American-style mansion mystery in the tradition of S.S. van Dine, Clyde B. Clason and Roger Scarlett!

Seeds of Murders begins in the villa Royal and Phyllis Delancey on Long Island Sound, between Connecticut and Long Island, where they're hosting a house party and a thunderstorm "howled about the villa like a chorus of anguished demons" as guests are dripping in. The guest list comprises of Phyllis' brother, Adrian Courtney, who brought along his present affaire du Coeur, Miss Faustina Welford. Royal Delancey invited his business partner, Jacob Wallace, along with a young redhead, Miss Dolly O'Day, and a long-standing friend from his days as a planter in the Philippines, Fred Burton – who's "a poor but honest henequin planter." Finally, there's the narrator, Dr. Walter Allan, who met that famous detective of the Army Intelligence Bureau during "the dark days of 1917."

Captain Hugh North is described as "probably the best detective this side of Scotland Yard," attached to the Army Intelligence Bureau, but "the Federal Secret Service borrows him a lot of the time." He was supposed to accompany Dr. Allan to the villa, but was delayed by government business and the last to arrive.

Shortly after Captain North arrived, the startled butler, Alonzo, jabbers in Spanish that there's "a dead man upstairs." Jacob Wallace is dangling from "a bright nickel chain," suspended from a hook in the ceiling, in the middle of a spacious bathroom and there are "three small, cream-colored seeds" arranged in "a precise triangle." Captain North suspects this was a murder clumsily disguised as a suicide, but Lieutenant Bullock overlooked the obvious clues and believes it was a simple suicide.

Until a second, unmistakable murder is committed that night with three seeds arranged in "a neat, equilateral triangle" beneath the chair of the victim. Someone has attempted to pry open the secondary door of a wall safe that was found with its outer door standing wide open.

The contents of the wall safe revealed that the plot was constructed around a familiar theme in detective fiction at the time, namely the financial shenanigans of bankers, stockbrokers and financiers, which was a response to financial ruination of the Stock Market Crash of 1929 and the onset of the Great Depression – e.g. Freeman Wills Crofts' Mystery in the Channel (1931). And in this case, the financial wizardry at the brokerage firm of the victim's provided an honest man with the means, opportunity and motive for murder, but did he kill them?

Seeds of Murder has a good premise with a pretty well-done, skillfully handled, but ultimately simplistic, which only has one weakness: the plot has too many moving parts, operating independently, which means you have to accept that all these parts collided at roughly the same time and place. However, Van Wyck Mason presented this string of crimes as convincingly as possible and those individual parts were very well handled. The bungled murder of Jacob Wallace, solved with a quarter of the story left to go, was fairly clued and the clue of the running water was more than just a little clever, while the second murder and attempted safe cracking gave the story some good set pieces – only linked together by the characters and those mysterious seeds underneath the bodies. Van Wyck Mason added a nice touch by making the vital clue to the second murder only available to the narrator and reader. Captain North has to rely on a coded message to lure out the murderer.

All things considered, Seeds of Murder is a relatively short, competently plotted and solidly clued detective novel that you can breeze through in one sitting. So hardly a landmark title in the history of the genre, but a good debut and surprisingly traditional for a writer who would move towards political intrigues and spy-thrillers only a decade later.

Anyway, you can definitely expect more reviews of those earlier, Golden Age-style Captain North mysteries on this blog in the future. So stay tuned!
Geplaatst door TomCat on 9/20/2019