Enid Blyton's The Mystery of the Invisible Thief (1950) earned a spot on my best-of list of 2018 as a textbook example of a perfectly plotted and fairly clued detective story. A children's mystery novel about a rash of burglaries in a small, quiet village and the seemingly impossible disappearance of the culprit, but my second excursion in The Five Find-Outers and Dog series, The Mystery of the Burnt Cottage (1943), was more focused on introducing the characters than with the plot – as it was the first book in the series. So that was a little disappointing.

However, someone (anonymously) recommended a title from another one of Blyton's many series in the comment-section. A story tentatively described as a locked room mystery about "a series of mysterious thefts of various valuable documents from rooms that are hermetically sealed." Say no more! 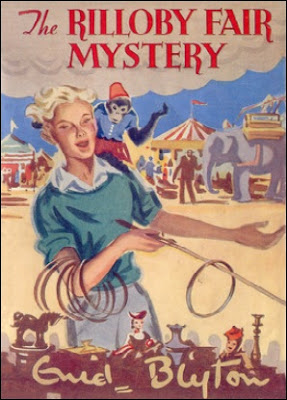 The Rilloby Fair Mystery (1950) is the second title in The Barney "R" Mystery series and the only series from Blyton's hands "recommended solely for children over the age of eleven." The stories are reportedly "full of atmosphere" with "a haunting, wistful quality," sparkling humor, strong characterization, clever plots and sophisticated language – a perfect summation of the qualities of The Rilloby Fair Mystery. Honestly, the protagonists of this series, including the animals, are some of the liveliest and most convincingly drawn (child) characters I have come across in these juvenile mysteries. And that includes Roger and Bill Baxter from Martin Colt's Stranger at the Inlet (1946).

There are four main characters in this series: a brother and sister, Roger and Diana Lynton, who spend their school holidays with their orphaned cousin, Stubby, who's always accompanied by his energetic, overly enthusiastic black cocker spaniel, Looney. During their first adventure, in The Rockingdown Mystery (1949), they befriended a circus boy, Barney, whose only friend up until then was his pet monkey, Miranda.

Apparently, Barney is searching for his long-lost father and this is a plot-thread that runs through the entire series. I wonder if Barney was based on Rémi from Hector Malot's classic Sans famille (Nobody's Boy, 1878). Or, if you're Dutch, you probably know the book under the title Alleen op de wereld (Alone on the World).

The Rilloby Fair Mystery takes place during a four week Easter holiday and the Lynton's are preparing the home for the arrival of two house guests, Stubby and Great-uncle Robert, who have never met each other. So, when they have an unexpected meeting on the train, Stubby tells Great-uncle Robert a tall tale about being on the run from "an international gang," the so-called Green Hands – warning him to be wary of "anyone wearing green gloves." A story that startles the old, pompous man because he has just came from a place where historical documents where inexplicably stolen from a locked room.

A little tall tale that comes back to haunt Stubby when he discovers that the old, stuffy gentleman, whose leg he pulled on the train, is the Great-uncle of his cousins. So he spends a good portion of the story attempting to dodge Great-uncle Robert.

However, the story of a thief who "apparently passed through locked doors or barred windows" to take historical and valuable documents from various homes and museums is too good to ignore. Roger, Diana and Stubby study the newspaper and astutely observe that the string of thefts can be linked to a traveling fair, which means that either "the fair goes to places where there are rare papers to be stolen" or somebody in the fair is snooping around each place they go "to see if there are any in the neighborhood worth stealing." So, off they are to the fair, where they're reunited with their old friends, Barney and Miranda, but also meet a whole host of carnival characters. 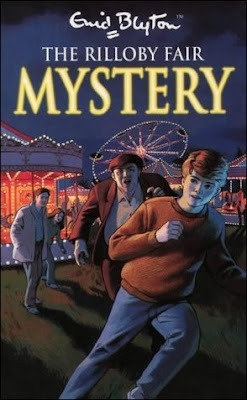 There's the ginormous, thunder-voiced owner of the fair, Tonnerre, with his elephants. Vosta and his two chimpanzees, Hurly and Burly. Billy Tell, the "famous cracksman" in charge of the shooting gallery, his son, Young 'Un, and his sharp-tongued mother, Old Ma. All of whom could potentially be the mysterious burglar who can "go through locked doors and fastened windows."

As they roam around the fair and pry information from Great-uncle Robert, the children deduce the next target of thief, Marloes Castle, which has a room housing a modest collection of documents and stuffed animals protected behind three locked doors – of which the third has two locks and a burglar alarm. The windows are always fastened on the inside, protected by bars on the outside, while the chimney is too narrow to crawl through. A practically impenetrable muniment room! Nonetheless, this elusive burglar succeeds in entering and leaving the locked room without any trace, or triggering the alarm, but this time the burglar took something very different from the room. A huge clue to part of the locked room-trick.

Honestly, nearly every adult or seasoned mystery reader will have a pretty good idea how the locked room-trick was worked at this point and I sighed with disappointment. But my disappointment was short-lived.

A very old trick that I don't like to see in a locked room story, but I have to give it to Blyton, she added something very clever to it that made it acceptable again in 1950. Getting in-and out the locked rooms was only one part of the trick, but how the documents and papers were selected put a new spin on an age-old trick. My only real complaint is that the solution was presented as a one-size fits-all locked room-trick. There was an obvious reason why it worked in the private room, of Marloes Castle, but you're not getting that lucky with every single room storing a private collection of valuable papers. A brief, throw-away line in one of the last chapters betrayed that Blyton was aware of this.

Everything considered, I think I like this series a lot more than The Five Find-Outers and continue my exploration of Blyton with The Barney "R" Mysteries, but don't expect those reads to be in chronological order. The Rat-a-Tat Mystery (1956) is penultimate title in the series and has an impossible problem of the footprints-in-the-snow variety, which is presented in a way very reminiscent of the impossibilities from Edward D. Hoch's "The Gypsy's Paw" (collected in The Iron Angel and Other Tales of the Gypsy Sleuth, 2003) and Anne van Doorn's "Het huis dat ongeluk bracht" ("The House That Brought Bad Luck," 2018). Now I want to know if Blyton had a third solution for this particular vanishing-trick.