Back in March, Dean Street Press reissued a handful of long out-of-print detective novels by the elusive "Moray Dalton," a penname of Katherine M. Renoir, who wrote close to thirty detective novels branded by resident genre-historian, Curt Evans, as "one of the more significant bodies of work by a Golden Age mystery writer" – which remained accessible "almost solely to connoisseurs with deep pockets" for decades. The Strange Case of Harriet Hall (1936) was recommended by Evans as "one of the finest detective novels" of the period. 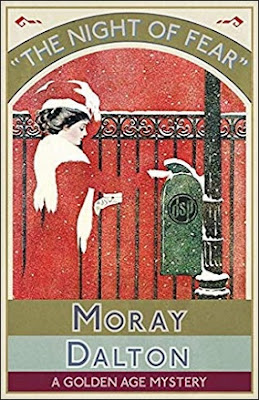 I politely disagreed with Evans on The Strange Case of Harriet Hall, but he commented that The Night of Fear (1931) or Death in the Cup (1932) were probably more to my taste.

So, with the final quarter of the year in front of us, I decided to go with Dalton's take on the traditional, Christmas-themed country house mystery. A note for the curious: this review was written in late June.

The Night of Fear opens with a telephone call to Sergeant Lane, of the Parminster constabulary, summoning him to the home of George Tunbridge, Laverne Peveril, where a costumed Christmas party concluded with a game of hide-and-seek in the dark – during which one of the participants found a body in the long gallery. Hugh Darrow is an old school friend of the host, blinded in the Great War, who had hidden himself behind the curtain of an alcove in the gallery. As he sat there waiting, he heard a steady dripping, "like the ticking of a clock," but slower. The sound seemed to come from another alcove and when he investigated he found the body of another party member, Edgar Stallard. Who's known to the general public as "a prolific writer of memoirs of a certain type."

Laverne Peveril was packed with family and guests at the time of the murder: there are Mr. and Mrs. Tunbridge. His cousin, Sir Eustace Tunbridge and his much younger fiancée, Miss Diana Storey, who's accompanied by her domineering grandmother, Mrs. Emily Storey. She arranged the marriage between Sir Eustace and Diana. Two of his old friends, Hugh Darrow and an American, Ruth Clare. There's "a kind of protégée" of Mrs. Tunbridge, Angela Haviland, who brought along her brother, Julian. Jack "Rags" Norris brought his two sisters and two of his undergraduate friends with him. So fourteen potential suspects in all, if you exclude the servants.

Sergeant Lane is glad to have his old friend, Inspector Hugh Collier, staying with him over the holidays and assists him in the initial stages of the investigation, but, after interviewing everyone, the story takes a departure from the conventional country house mystery – resulting in Collier exiting the case on two separate occasions. Normally, in a Golden Age mystery, the local authorities tend to be grateful to have the good fortune to have a reputable inspector or famous amateur detective in the neighborhood when a body turns up, but Dalton broke with that tradition in The Night of Fear.

Colonel Larcombe is the Chief Constable and he sends Collier packing, because he prefers to run his own show with his own men. Only to call him back the following morning when Sergeant Lane is found gassed in his bedroom, but he's again removed from the case after a complaint from Sir Eustace. Collier was replaced by Chief Inspector Purley, a policeman of the treat-'em-rough school, who immediately makes an arrest. And his take on the case was nearly identical to my (incorrect) solution. 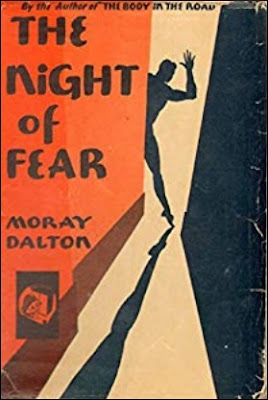 I assumed the murder of Stallard was the result of an unfortunate set of circumstances that started with the suggestion of a game of hide and seek in the dark.

You see, Darrow drew a pension as a disabled veteran and my suspicion is that he shammed his blindness, which was discovered by Stallard when he saw the supposedly blind man stumbling around in the dark when the lights went out and this was grist on his mill – because Stallard was a sensationalist who dabbled in blackmail. So he had to be silenced. Dalton provided Purley's case against Darrow with a more tangible motive, but either way, Darrow is placed in the dock. This adds one last name to the list of detectives working on the case.

In his introduction, Evans compared Hermann Glide, a private inquiry agent, to an obscure, little-known Agatha Christie character, Mr. Goby, who appeared in The Mystery of the Blue Train (1928), After the Funeral (1953), Third Girl (1966) and Elephants Can Remember (1972). A wizened little man who looks "like a sick monkey" and is constantly kneading "a lump of modeling clay." Collier recommended Ruth Clare, who's in love with Darrow, to engage Glide to help her prove his innocence. And the clock is ticking!

So, after my first, incorrect solution, I spotted the murderer, but there was a surprising, final twist in the tail of the story. A twist that would have been more effective had it been fairly clued or foreshadowed. Now this bolt out of the blue stands as the only flaw in an otherwise excellent detective story.

All in all, I found The Night of Fear to be a more accomplished detective novel than The Strange Case of Harriet Hall and one of the better Christmas-themed country house mysteries from the Golden Age. Highly recommended for those darker, longer days of December.

On a final, semi-related note: The Night of Fear was published in the same year as Molly Thynne's seasonal mystery novel, The Crime at the Noah's Ark (1931), which made me wonder if these two novels started the tradition of Christmas mystery novels – since every single example I can think of were published after these two mysteries. I know there are some short stories predating them, but not full-length mystery novels.