Jonathan Latimer was an American writer who began his career as a journalist at the Chicago Herald Examiner and the Chicago Tribune, but turned to writing hardboiled crime fiction in the 1930s and worked as a screen writer in Hollywood – penning episodes for Columbo, Markham and Perry Mason. The capstone of Latimer's writing career are definitely his traditionally-structured, hardboiled and alcohol-fueled mystery novels often laced with impossible crimes and some screwball comedy. 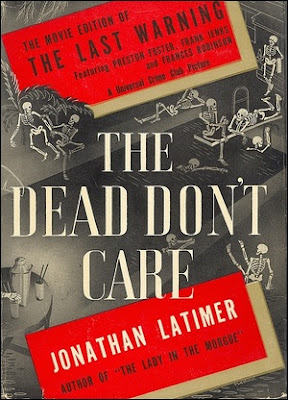 Three years ago, I read two of Latimer's hardboiled whodunits, Murder in the Madhouse (1935) and Headed for a Hearse (1935), which take place against the somber backdrop of a private sanatorium and the death-house. They're pretty dark, grim hardboiled private-eye novels, but competently plotted, complete with locked room puzzles, and some memorable set pieces. The scenes with the condemned men in the death-house immediately come to mind.

So a return to Latimer was long overdue and settled on the fourth entry in the Bill Crane series, entitled The Dead Don't Care (1938), listed in Locked Room Murders (1991) as having no less than two impossible crimes – an inexplicable poisoning and the miraculous disappearance of ransom money. Regrettably, it turned out to be one of those cases in which both the author and detectives phoned it in.

Union Trust Company are the trustees and legal guardians of the heirs to the Essex fortune, Camelia and Penn Essex, who hired the two detectives from New York to ferret out the person who has been sending Penn threatening demands for money. The letters tell the young man the time has come to pay his debts and instructs him "to get fifty thousand dollars in unmarked bill," which are all signed "The Eye." These letters also present a quasi-impossible problem, because their delivery appear to defy any logical explanation. Ten days ago, Penn put five-hundred dollars in his wallet for "a fling at the Blue Castle," a gambling house, but, when he opened it to buy some chips for the roulette game, a letter fell out – which makes for an interesting premise. However, the solution to the letters disqualifies them as impossible problems.

Once again, the premise is pretty solid with the mysterious deliveries of the threatening notes and even our detectives receive a couple of them. Telling them to get out or "the gators back in the swamps will be fatter," but the pacing completely goes to pieces with Crane and O'Malley spending most of their time on drinks, food, gambling and women. Crane and O'Malley actually managed to turn a paid job into a busman's holiday without any of that pesky extra work. Not even the kidnapping of Camelia was able to fasten the pace of the story or give the plot any sense of urgency. Mind you, Crane didn't think "the average kidnaper was above a little rape." What a useless detective! 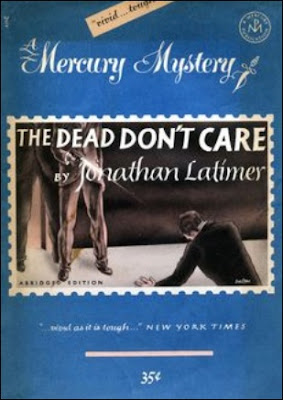 Thankfully, the two previously mentioned impossibilities turned out to be the only bright spots in an otherwise overly indulgent, mediocre and underwhelming mystery novel.

Firstly, Crane spends the night with an exotic dancer, Imago Paraguay, but the following morning, she lies dead next to him in bed with "a faint, bitter odor" on her cerise lips – she has been poisoned. The door of the bedroom was bolted on the inside and the balcony looked out over "an impossible jump." Someone must have been in the bedroom with them, because this person had stolen Crane's pants! This is Latimer's best locked room-trick to date with a more tricky method and a potentially good clue, but a certain something had to be shown or mentioned to have made the "two small scars" on the box of veronal a proper clue. Still, this the most inspired aspect of the plot.

The second impossibility centers on the delivery and miraculous disappearance of the ransom money. Penn is instructed to put fifty thousand dollars in unmarked bills, wrapped in oil skin, in a carton box and leave it under a bridge, but the location is kept under observation by the police. Somehow, the carton box disappears as if it was taken by an invisible man! A good attempt was made here to misdirect the reader, but the explanation was still disappointingly simple. And confirmed what I had been fearing from the beginning.

The Dead Don't Care has officially replaced Ellery Queen's The Spanish Cape Mystery (1935) as the most transparently plotted detective novel from a highly regarded Golden Age mystery writer. I suspected this exact solution very early on in the story, but tried other combinations with the same motive, because it was way too obvious. And yet, this was the conclusion Latimer had the nerve to serve his readers after making them sit through all that hedonistic bullshit!

So, all in all, The Dead Don't Care is one of the worst hardboiled (impossible crime) novels populated with shallow, immature characters, a paper-thin plot and sparse detective work by holidaying detectives. The Dead Don't Care and neither should you.
Geplaatst door TomCat on 8/07/2019