Out of His Mind

Back in February, I reviewed Jonathan Latimer's Headed for a Hearse (1935), a hardboiled locked room mystery, which I erroneously labeled as his first foray into the genre, but the always helpful comment section pointed out several sources that list Murder in the Madhouse (1935) as the first entry in his five-part Bill Crane series – which was published in the same year as Headed for a Hearse. It’s an understandable mistake to make, right? So lets try this again!

Jonathan Latimer began his writing career as a reporter for the Chicago Herald Examiner, but eventually left the newsroom behind to become a novelist and scenarist in Hollywood. As a screenwriter, Latimer wrote episodes for Perry Mason, Columbo, The Lone Wolf and adapted several hardboiled novels for the big screen, which included Dashiell Hammett's The Glass Key (1931) and some of his own work – e.g. The Lady in the Morgue (1935). But he's primarily remembered by the mystery readers of today for the darkly humorous, alcohol fueled hardboiled and sometimes slightly controversial screwball novels about Bill Crane. 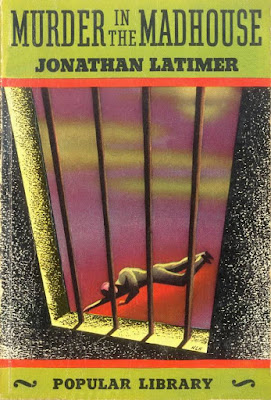 Connoisseurs of the private-eye novel will likely point out that Latimer's greatest contribution to the genre was in a far more serious vein, Solomon's Vineyard (1941), but that's a story for another day. So, lets finally take a look at Latimer's debut novel!

Murder in the Madhouse opens with Bill Crane in the back of an ambulance, hands cuffed, en route to a private sanatorium. Crane is being brought in on account of his delusions, "a fixation that he's a great detective," but not any old detective. Oh no! Crane has laid claim to the name of Edgar Allan Poe's C. Auguste Dupin and gave "a demonstration in elementary deduction" upon his arrival, which immediately caused friction between Dr. Livermore and Dr. Eastman – who run the entire sanatorium. It would not be the last exhibition he gave of elementary and advanced feats of deduction.

Of course, the delusions of Crane are simply a ruse to get into the place and the reason for his presence is an undercover assignment: one of the sanatorium's patients, Miss Van Kamp, sent a distressing message to her brother and he hired Crane to find out what has happened.

Miss Van Kamp was in possession of a small strongbox, stuffed with "about four hundred thousand dollars worth of bonds," but equally important is that the box contained one of two keys necessary to open a safety-deposit box in New York City. A deposit box holding an additional eight hundred thousand dollars in cash, jewelry and bonds, which makes for a grand total of 1.2 million dollars! Obviously, people have been lured onto a path of crime for a fraction of that kind of money and someone was more than just tempted, because the strongbox went missing from its hiding place, but the purloiner is willing to a go a lot farther than mere thievery to became a millionaire – which becomes evident when a body is found underneath Miss Van Kamp's bed.

A good and kind man, named Pittsfield, who "thought he was Abraham Lincoln," was found strangled to death in Van Kamp's room. He would not be the last: the murderer switched from a black woolen cord to bone-handled knives and this enabled the guilty party to stack-up several bodies over a relatively short period of time. Crane has to figure out who's currently in possession of the strongbox and is willing to kill for it, while keeping up the pretence of being mentally slightly off balance and has to do so among potential suspects who genuinely are unbalanced. There are also the doctors and staff members to consider! 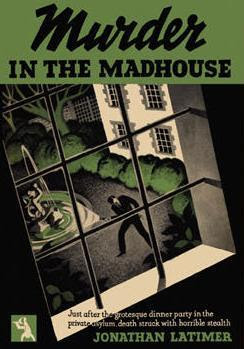 The combination of the setting and Crane's situation made for both an interesting and engaging detective story, but the plot and story-telling is also flecked with hints of the books relationship with the Hardboiled School – even revealing it as an early ancestor of the contemporary crime novel. As Latimer's profile on Thrilling Detective state, he was dogged by controversy, because he dared to dare the reader by showing them the grimier side of life, which even today seems to be able to shock and titillate some people.

There are, of course, the spots of physical altercations, but they're par of the course for a hardboiled private-eye novel. I don't remember ever reading one without several characters getting punched, kicked and bruised. However, here we also have one of the patients getting bloodied in a third-degree by the orderlies of the sanatorium. A gross abuse of power which is also present in the way the doctors conduct themselves. Who initially refused to alert the authorities about the murders that were taking place in the sanatorium, but that's just the surface stuff.

The same orderlies, who also drove Crane around in the ambulance, were overheard by him in the first chapter bragging how great an ambulance is to pick up "babes," because you don't have to pay for a hotel room and how the best part is "that they can scream their damn heads off" and "nobody will pay any attention" – which sounded kind of rapey. There were a number of references and descriptions to the consumption of illegally obtained moonshine, which was topped off with a spot of casual racism.

So I can imagine Murder in the Madhouse would have some modern readers sprinting to the nearest designated safe-space and fling themselves on the first therapy dog they find there. But if you have the historical awareness that the early twentieth century wasn't like a Walt Disney movie, you can probably handle Latimer's crime-fiction. And there's a small bonus for the readers who can make it to the end of the book.

Murder in the Madhouse is mentioned in Robert Adey's Locked Room Murders and Other Impossible Crimes (1991), but the impossible situation does not occur until the very end of the book. The seemingly impossible murder is used as way to identify the guilty part and expunge any possible doubt about the guilt of this person. I’m not going to reveal too much about this situation, but it does involve a body being flung from an upper-floor room that had only one, high up and seemingly inaccessible window. It was the room where the murderer was being detained. So that was nicely done, I thought.

Murder in the Madhouse was engagingly written, competently plotted and found an original way to introduce a series characters. The final explanation missed the ingenuity of many of Latimer's Golden Age contemporaries, but, as I said before, it was a competently done and not every hardboiled writers constructed his plots like an old-fashioned whodunit – and I prefer my hardboiled detective stories to have a plot. So I should try and refrain from complaining and simply end this review by saying I enjoyed this outing even more than Headed for a Hearse.
Geplaatst door TomCat on 4/06/2016