"The lowest and vilest alleys in London do not present a more dreadful record of sin than does the smiling and beautiful countryside."
- Sherlock Holmes (Sir Arthur Conan Doyle's "The Adventure of the Copper Beeches," collected in The Adventures of Sherlock Holmes, 1892)

Dr. Gerhardus Hellinga was a Dutch internist, endocrinologist and the founder of andrological fertility science in the Low Countries and a founding member of De Vereniging voor Fertiliteitsstudie (Society for Fertility Study), which lead to him becoming a Principal Assistant in the Department of Internal Medicine of the Free University of Amsterdam. He worked there until his retirement. 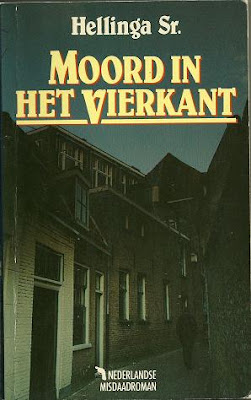 After retiring from a professional life dedicated to medical research, Hellinga began to work on fulfilling a life-long cherished ambition: writing and crafting a misdaadroman (detective novel). I did not make that up in order to fluff this piece up. It was mentioned in his "In Memoriam," which noted "he had once said he would like to write a detective novel," but he put four of them to his name – before passing away in 1991 at the respectable age of 84. So, now that we got that shakily and clumsily written introduction out of the way, we can take a look at his debut novel.

Under the penname of "Hellinga Sr," he wrote not one, but four, mystery novels and three of them had a small village physician, Dr. Joris Joris, as the detective. Moord in het vierkant (Murder in the Square, 1981) was the first one in this short series.

Dr. Joris suffers from "ziekelijke vetzucht" (morbid obesity) and as a result he's colossally fat with enormous shoulders and arms. Fat bulged around his neck and on his back. He barely had any hair on the top of his head, but it grew wildly above his ears and on the sides of his cheeks, which made his face look extra wide – giving it the appearance of "the head of a lion." His impossible fatness made him depended for personal care on his assistant, Hannes. Otherwise, he would have been regarded as an invalid, but the personal care he received from his assistant allowed him to continue to work as a doctor and make his patient rounds in the village.

The village of Bikhoven is a fictional place, nestled in a quiet polder landscape of the Province of North-Holland, which has a square grassy area that's completely surrounded by a complex of houses and streets – known in the village simply as Het Vierkant (The Square). Life in the village has remained relatively simple and there are still living remnants of the past, but, above all, it's a peaceful and quiet place. But that all changes when one of the prominent locals is murdered.

Paul van Dam was a Public Notary, or simply notaris in Dutch, whose lifeless body is found inside his office: a revolver was clasped in his hand, blood stain on his coat and the door of a wall safe was swung wide open. After the discovery, the rumor mill of the village assumed Van Dam had shot himself, but Dr. Joris immediately determines the blood seeped from a stab wound. It's murder!

You could easily describe the subsequent investigation as a "Case for Three Detectives," because there are three of them. Firstly, there's Dr. Joris and he tows around a young man, Alexander Arnolds, who's dating one of the doctor's daughters, Dolly, but he may have been in the village at the time of murder on a work related assignment – as he's attached to one of the government ministries and usually does investigative work for this ministry. It may have been related to another village prominent. The last one is a rechercheur (detective) from Amsterdam, Mr. Verlinde, but he's a fairly minor character in the story.

Well, they encounter a surprising amount of suspects and motives in the small village, which cuts through all of the social strata of the village life: the Belgian wife of the mayor, who had an extramarital affair with Van Dam, and her husband may have wanted him out of the way because he was against the purchase of a plot of land by the village counsel. Klaas ten Cate is a chemist and claims to have made an important invention, which he wanted to sell to the Ministry of Defense, but he's not very popular with his fellow villagers on account of his loose morals and cruelty to animals. A Japanese man was beaten up by a German guest in the local lodging house, called "De Kat," after which he vanished from the stage and Japanese man was brought to the local hospital. There's woman suffering from insomnia, known to everyone as Aunt Alie, who keeps an eagle eye on her fellow villages with a pair of spyglasses and Dr. Joris calls her "the best spy he has." There's an old-fashioned barber, who saves his customers "like his father did fifty years ago," but he's also one of the prime movers of the local rumor mill.

This all makes for a very readable and enjoyable story, but, as the cogs of a plot, they were rendered useless when both the false and correct explanation fingered two persons outside of this closed community of suspects who only played a small part on the sidelines of the story – which also tied in with the obvious motive and made the murders incidental. Oh yeah, there's a second, completely unnecessary, murder and the culprit conveniently commits suicide. So I was left profoundly disappointed after that rather under whelming ending. It's why this review is so poorly written without much of substance, because, plot-wise, most of interesting stuff was thrown out of the window by the end.

I wish I could end my return to the homegrown detective stories of my country on a more positive note, but the ending was really disappointing.

Well, I did like the Dell Mapback-like map of Bikhoven and enjoyed the character of Dr. Joris Joris. Several times, Dr. Joris took a break from the story itself to sit down on his soapbox and lecture about his unorthodox opinions on doctor-patient confidentially, village life, the future of medicine and the effects the sound of a name has on shaping a child's personality. It gave him that aura of the Great Detective and he deserved a better case to help solve, but I've read De breinaaldmoorden (The Knitting-Needle Murders, 1983) is supposedly to be his best effort. So I'll probably give that one a shot somewhere down the line.

Well, I hope I'll be returning soon with something better. In the meantime, you might want to read my previous review, in which I took a closer look at some of the locked room mysteries penned by Jacques Futrelle during the early 1900s.
Geplaatst door TomCat on 4/17/2016