"It's no use crying over spilt evils. It's better to mop them up laughing."
- Eleanor Farjeon

The family of Benjamin Farjeon, a prolific novelist from the Victorian period, came from humble stock, but all of the children from his household were able to carve a name for themselves in several cultural genres – such as literature, theatre and music.

Harry Farjeon was a magician, composer and teacher. Herbert Farjeon was an important figure in British theatre and a stage critic. Eleanor Farjeon was an author of children's author who has a book-prize named in her honor. But the one who is of interest to us is their brother and a once famous fiction writer, J. Jefferson Farjeon. 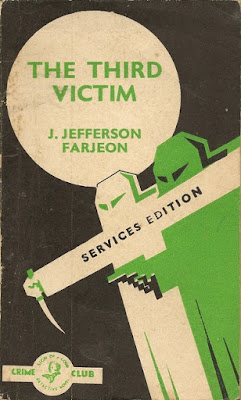 J. Jefferson Farjeon proved himself as fertile a writer as their father and reportedly a personal favorite of Dorothy L. Sayers, praising him as being "quite unsurpassed for creepy skill in mysterious writing," but his work and reputation has languished in obscurity for decades. Recently, there seems to have been a change, as he appears to be undergoing a personal renaissance, reminiscent of Gladys Mitchell's rise from literary oblivion during the previous decade – going from one of the most obscure names in the genre to having nearly all of her books reissued by various publishers. I think I can pinpoint where and when Farjeon's began to reemerge from the mists of time.

On November 22, 2011, Curt Evans published his first blog-post on "The Passing Tramp," which was a reference to "one of the era's unlikeliest series detectives," Ben the Tramp, who appeared in eight of Farjeon's roughly eighty novels. Evans also seems to have been the first person on the internet to have reviewed or simply talked about Farjeon. It might just have been a coincidence, but the Poisoned Pen Press reprinted Mystery in White (1937) in 2014 and the book sold over sixty thousand copies – making it a smash hit that surprised everyone.

As a result of this unexpected success, three additional titles were reissued, The House Opposite (1931), The Z Murders (1932) and Thirteen Guests (1936), with more of them on the way.

Personally, my only exposure to Farjeon's work came from reading the splendid, original and very amusing Holiday Express (1935), which deserves to be reprinted, but I sort of forgot about his books that were on my to-be-read pile after that – both of them old pocket editions from Collins White Circle. So I had to decide between The Third Victim (1941) and Prelude to Crime (1948), which was decided in favor of the former. I found the synopsis of the book to be very appealing.

The Third Victim tells of George Lyster's return to his ancestral home after having spend twenty-six years of his life in Australia, but what he finds is a place as faded as his quarter-of-a-century old memories of the place

When he walked out of the gates of Broadland Hall twenty-six years before, they "had been well kept and imposing," but now the rusty, corroded iron made "the two dignified cavaliers who had stood for centuries on the gate posts" look unimposing and the place impressed him as being "shockingly neglected." A once large staff that was needed to run the estate had been decimated and reduced to only three persons: a gloomy, fretful butler, named Dyke, who appears to be under the thumb of the antagonistic housekeeper, Mrs. Peto. And there is a gardener who "believes in skeletons and headless men and such nonsense."

Worryingly, this bunch of characters have been looking after Lyster's invalid mother, Dowager Lady Lyster, who suffered a crippling and paralyzing stroke, which left her unable to speak and can only communicate by the feeble movements of her hands – twitching her left or right hand to answer yes or no questions. Only normal person she got see in a long time is a now middle-aged woman from the neighborhood, Evelyn Eames, who Lyster remembers as "that long-legged kid" from all those years ago and wonders why she is not bringing up a family of her own. 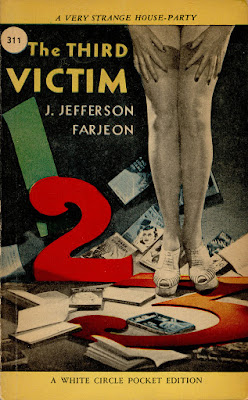 Sad state of the place reminds Lyster of a time "when there was less dust around" and "when the house was fuller," as well as friendlier, but from the family solicitor, Mr. William Lotham, he learns there's clinging more to the estate than simple neglect.

The reason for Lyster's return to England was the sudden death of his brother, who broke his neck in a fall from the high gallery into the hallway below, but Lotham informed him the tragedy occurred only an hour before Sir Maitland altered his will – which practically left everything to his brother who was still down under at the time. He was also surprised to learn there was a legacy for an adopted daughter, Ursula, which was to be held in trust for ten years and if she married a certain Ralph Murray her share would revert to Lyster.

Fourteen years ago, Sir Maitland had adopted foundling twins, a pair of eight-year-olds, named John and Ursula, but the boy tragically died two years later when he fell from the high gallery. It was "in precisely the same way" as his adopted father would perish twelve years later. Lyster concludes "there’s not only dust in this house," but poison as well and swears to clear it out – so one can breath again.

Lyster engages the services of Detective Kendall and Sergeant Wade, once attached to Scotland Yard and now operate as "the private detectives in the kingdom," who came to Broadland Hall in disguise for a discreet enquiry. Kendall plays the role of an history enthusiast, "Headley Swayne," who comes to Broadland Hall to gather material for his book, The Historic Homes of Britain. Wade has to be contend with playing a second butler to the place. It’s an arrangement described as a bit of a comedy, but, stylistically, it has an interesting affect on the story and characters: the infusion of a bunch of normal and sane people in the formerly dark, neglected and decaying home begins to have a similar effect on the place as airing a house that had been boarded up for years.

Past shadows are slowly being shooed away and slowly they are getting closer to identifying the murderous entity lurking in the home, which may be one of the books two sole weaknesses.

The first of these two weaknesses is the clueing, which is really nothing more than foreshadowing. It nods in the direction where the explanation can be found, but nothing more than that and you can only really guess the murderer's identity. Secondly, the identity of the murderer who serves here as a jack-in-the-box surprise, but I think the murderer belonged to both a different genre and period of time. I thought The Third Victim was not unlike one Annie Haynes' nineteenth century-style detective novels with an ending that could have been lifted from the pages of an Edgar Allan Poe story. It could make for a splendid and fun period story, but I was hoping the ending would have been a continuation of the first three quarters of the story, which constituted the best parts of the book – both story-and plot-wise. Stylistically, the ending struck a bit of a false note, because it moved along the lines of a British country house mystery before ending up in Poe country.

However, I can easily imagine this will be less of a problem to readers who are warned there's a sharp twist in the road towards the end of the story. So you can thank me for going ahead and warning you about it.

Finally, I have to note that The Third Victim struck me as an indoor version of Ivans' De bosgeest (The Forest Spirit, 1926).

Well, I'll be back with something definitely classical for the next blog-post. I should probably also try to write a rambling blog-post again or finally re-write and update this list. But that's something for the future.
Geplaatst door TomCat on 4/30/2016