Lewis G. Robinson was a medical officer in the British Army during the First World War and wrote three very obscure, army-themed detective novels, The Medbury Fort Murder (1929), Tell No Tales (1931) and The Manuscript Murder (1933), published as by "George Limnelius" – a reference to his mother's maiden name, Limmel. Robinson also penned an inverted mystery novel under his own name, The General Goes Too Far (1936), which was adapted as the motion picture The High Command (1937). 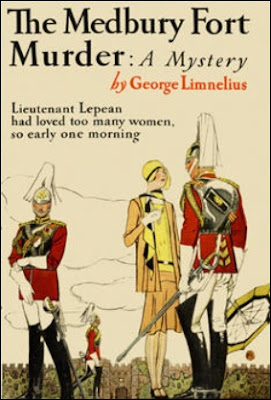 The Medbury Fort Murder is perhaps the least scarce and most interesting title of three mystery novels Robinson wrote under the Limnelius name.

Robert Adey described The Medbury Fort Murder in Locked Room Murders (1991) as "a straight locked room novel" that "rises above most of it contemporaries by virtue of the excellent writing and characterization." John Norris, of Pretty Sinister Books, lauded the book as "one of the most unique novels" from the early 20th century, because it's both "an inverted detective novel" and "a true detective novel" – while Martin Edwards called it a "terrific book." So, with such glowing recommendations, the book rocketed to the top of my (locked room) wish list, but it took me some time to finally get around to it.

Admittedly, The Medbury Fort Murder is an excellently written piece of detective fiction with surprisingly (for the time) mature characterization and an ambitious plot twisting, and reshaping, the inverted detective story.

The Medbury Fort Murder opens with a lengthy introduction of the characters, spearheaded by Major Hugh Preece, Royal Army Medical Corps, who's a serious-minded medical officer with only "a few flirtations" and ''temporary connections of a more intimate character" under his belt, but has now fallen in love with Prunella Lake – a small part musical comedy actress. They have a short-lived, but earnest, fling "interrupted by the outbreak of the Great War." After which Prunella married the then future Sir Tremayne Ronan and Major Hugh started a family with Claire Chisholme.

Ten years come and go, Hugh receives a letter from Prunella asking him to meet her to chat about old times, but they end up spending the night together, secretly, in a hotel room. And nine months later, Prunella finally gives birth to her first child and passes the boy off as Sir Ronan's. This was supposed to be a secret between only two people, Hugh and Prunella, but Lieutenant Charles Lepean has gotten wind of their little secret. Lieutenant Lepean is best described as a vile, blackmailing miscreant.

The other potential suspects introduced in these chapters are Captain Wape, Lieutenant Harris and Private Swansdick, who'll be with Hugh the primary suspects of the impending murder at Medbury Fort – one of "the chain of forts in the Thames and Medway Defenses." This part of the story also include a brief, richly detailed flashback to an episode in West Africa, which had a glimmer of that memorable, second-half of Christopher St. John Sprigg's The Corpse with the Sunburned Face (1935). George Limnelius was a good writer who knew how to spin a yarn with characters acting like actual human beings, but Limnelius also proved himself to be a very proficient plotter.

John Norris suggested in his previously mentioned review Limnelius seems to have been inspired by Anthony Berkeley's mystery novels. I don't think this is true, because the only typical Berkeley novel he had written at the time was Roger Sheringham and the Vane Mystery (1927) with Jumping Jenny (1933) and Trial and Error (1937) still being in the future, but The Medbury Fort Murder certainly resembles them by inverting the inverted detective story.

In a letter, Prunella tells Hugh that Lieutenant Lepean "must be silenced," because they'll both be ruined if their secret is exposed or "else bled white." Hugh and Lepean happen to be both stationed at Medbury Fort. 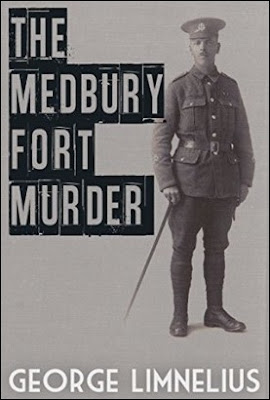 So, Hugh begins to plan the murder of Lieutenant Lepean and takes inspiration from a well-known classic of the locked room mystery, but, when Lepean is murdered with surgical precision behind the locked door of his bedroom, it becomes doubtful he actually committed the murder – or did he? There are only three other viable suspects, Captain Wape, Lieutenant Harris and Private Swansdick, where the only ones who could possibly have had access to the officers' quarter at the time of the murder. You can only reach the stone stairs leading to the officers' quarters and mess by passing through the guard room, which had been constantly guarded by either one or three soldiers. So not only is this a locked room puzzle, but also a very tight closed-circle of suspects.

A problem complicated by the presence of three possible murder weapons: a surgical knife, a West African machete and "one those obsolete, long, curved, French bayonets." A problem reminiscent of G.K. Chesterton's "The Three Tools of Death," collected in The Innocence of Father Brown (1911), but here it was not used quite as effective. The clues themselves also turn out to be somewhat troublesome. Who oiled the lock on Lepean's bedroom door and why was the key stolen after the door was broken down? More importantly, the murderer appeared to have employed a different kind of locked room-trick than the one Hugh had planned on using.

Limnelius deserves credit for handling the impossible crime, because normally I would hate these creaking, dated and shopworn locked room-tricks.

There are two (false) solutions proposed to the impossible murder that many readers have seen before, which can also be said about the last and correct solution. However, I can't remember any other locked room story pre-1929 using this exact explanation. I know of a mystery novel from 1931 that used it, but not one predating The Medbury Fort Murder and, keeping this in mind, the ending probably worked better in 1929 than in 2019 – because the timeworn explanations was followed by an original one. A very simple solution that can be seen as an inversion of the locked room problem.

The way in which Limnelius structured and presented the murder of Lieutenant Lepean reminded me of Leo Bruce's Case for Three Detective (1936). We have a murder in a locked bedroom investigated by three detectives, under the guidance of Chief Inspector McMaster, who gather various pieces of evidence and try to fit to one or more of the suspects. The result is an engagingly written, solidly plotted and mostly satisfying detective novel with a nice surprise packed away at the end.

There are, however, a couple of minor smudges. I don't think the clueing is as strong as it could have been, which helped make the surprise a genuine surprise, and the explanation as to what happened in the locked bedroom required a pretty big coincidence. Some modern readers, like Aidan of Mysteries Ahoy (his review can be read here), might have a problem with the classist attitudes aired and imposed on the characters. Chief Inspector McMaster even confidently states that in "the history of crime" there's "no single case of a murder of violence having been committed by an educated man," which is reflected in the motive of the murder.

If you can look pass these imperfections, you'll find an excellently plotted and characterized detective novel in the tradition of 1930s Anthony Berkeley that made surprisingly good use of some old, tired locked room tropes. So, yes, highly recommended!
Geplaatst door TomCat on 8/03/2019