Isaac Asimov is a monument of the Science-Fiction genre and was a ferocious mystery reader who, together with Anthony Boucher, became one of the most important "Visitors from Science-Fiction" to the detective story – penning the stellar The Caves of Steel (1953). A novel that demolished the argument that modern forensics and emerging technologies have made clever, intricate plotting absolute decades before it was made. An undisputed top 100 mystery novel!

Asimov proved to have a versatile hand when handling the detective story format and wrote hybrids (Asimov's Mysteries, 1968), juvenile mysteries (The Key Word and Other Mysteries, 1977) and regular detective novels (Murder at the ABA, 1976), but my personal favorite will always remains his series of short armchair detective stories. 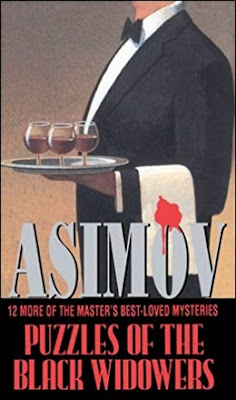 The Black Widowers is a men-only dinner club, who meet once a month, comprising of Geoffrey Avalon (patent lawyer), James Drake (chemist), Mario Gonzalo (artist), Roger Halsted (mathematics teacher), Emmanuel Rubin (novelist) and Thomas Trumbull (cryptography expert). Every month, they come together in a private-room at an Italian restaurant, Milano, and one of them has to bring a along an interesting guest.

Traditionally, the guest is grilled, all in good humor, which includes the question how the guest justifies his existence, but every time it turns out that the guest has an unsolved mystery for them answer – usually these problems falls into the category of "Everyday Life Mysteries." They occasionally get to discuss a murder (e.g. "Early Sunday Morning" from Tales of the Black Widowers, 1974), but, more often than not, they're those minor mysteries everyone can encounter in their day-to-day life. A good example of this is the missing umbrella from "Lost in a Space Warp" from The Return of the Black Widowers (2003).

However, the person who solves all of these mysteries is their waiter and honorary club member, Henry Jackson, who closely listens to the stories and false solutions proposed by the Black Widowers. And from this he reasons the one and only correct explanation for any given problem.

The Puzzles of the Black Widowers (1990) is the penultimate collection in this series and the last story, "The Recipe," was the final new Black Widowers story to be published during Asimov's lifetime.

Interestingly, "The Recipe" is homage to everyone's favorite mystery novelist and the master of the locked room puzzle, John Dickson Carr. In his afterword, Asimov wrote that he was inspired to write the story after reading The Third Bullet (1953) and was at "once overwhelmed with a desire" to craft a locked room puzzle, but was faced with the seemingly impossibility of thinking up "a new gimmick" – Carr had simply done it all. Nevertheless, an idea occurred to him and sat down to put the idea to paper in one sitting. Asimov was a notorious writing machine.

Note for the curious: Asimov said in the same afterword that he had never written "a Black Widowers story involving a locked-room," but this is not entirely true. "The Redhead" from Banquets of the Black Widowers (1984) is a genuine locked room story about a miraculous disappearance. If I remember correctly, "Ph As in Phony" and "The Obvious Factor" from Tales of the Black Widowers are borderline impossible crimes.

"The Recipe" begins with a discussion of Carr and locked room mysteries in general after Trumbull casually mentioned he had just read The Third Bullet. However, I think many of us, particular my fellow locked room readers, would take exception to the opinions spouted by the Black Widowers here!

Carr's writing is criticized as being overly melodramatic so that "the reader is always uncomfortably aware that he is reading fiction." Personally, I love Carr's Baghdad-on-the-Thames or Grand Guignol novels and his ability to create tense, terror-filled atmosphere is one of the most attractive aspects of his detective fiction. However, that's completely subjective. 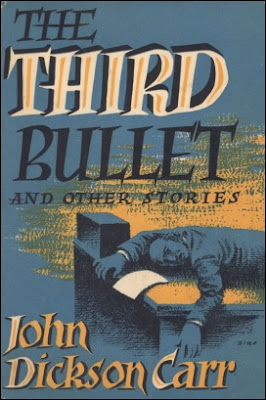 But they also criticize his plotting: Carr's locked room solution take an average of twenty pages to explain, which are "so intricate that the reader can't follow it without reading it several times," but this is not entirely true – because The Third Bullet is one of those elegantly simple impossible crime. Sure, Carr has dreamed up some ridiculous, overly complex locked room tricks (e.g. The Problem of the Wire Cage, 1939). But what about The Judas Window (1938), She Died a Lady (1943), He Who Whispers (1946) and Captain Cut-Throat (1955)? These are some of his best and most popular works with good, but easy to explain, locked room tricks.

Rubin is a mystery novelist and tells the group he never tried his hand at a locked room novel, because he claims Carr "killed the market for them." And he couldn't think of "a new variation." This reminded Gonzalo of the What's the Greatest Not By. So "what's the greatest locked-room mystery story not written by John Dickson Carr?" Nobody had an answer! Nobody! I'm an unapologetic JDC fanboy, but even I can throw out numerous examples that can rival the master: W. Shepard Pleasants' The Stingaree Murders (1932), Christianna Brand's Death of Jezebel (1948), Derek Smith's Whistle Up the Devil (1954), Helen McCloy's Mr. Splitfoot (1968), Herbert Resnicow's The Dead Room (1987) and Paul Halter's La ruelle fantôme (The Phantom Passage, 2005). Just to name but a few.

After the banquet and discussion, the guest of the evening, Myron Dynest, tells the Black Widowers he has a real-life example of a locked house mystery.

Dynest used to be plumber and moved from the city to suburbs where his wife, an old-fashioned country woman, has come back to life as she spends her time organizing church socials, picnics and neighborhood activities – as well as putting her talents as a cook to good use. Ginny is an excellent cook and someone suggested she should bundle all of her recipes into a cookbook. However, Ginny is reluctant to part with the recipe of her famous blueberry muffins and only briefly wrote down the recipe. Before she destroyed it. This happened when Ginny was babysitting a bunch of five-year-old children and the house had been completely locked at the time. Nobody had entered or left the house in the brief period between the time the recipe was written down and destroyed, but the recipe was stolen and the next day the recipe was posted on the church bulletin board. A word for word copy as she had written it. So who stole the recipe and, more importantly, how was it done?

The solution to the problem of the locked house is fairly clued, but the answer to the trick is not exactly original. I've seen variations on this trick before, which usually turn out to be incredibly carny, however, Asimov deserves credit for delivering the most believable and acceptable version of this locked room idea – which alone makes this story potential material for a future locked room anthology. I do think that the solution, especially the identity of the culprit, shows Asimov's admiration for Agatha Christie.

All things considered, "The Recipe" was a minor, but amusing, locked room story and a reminder I have to return one of these days to the Black Widowers.
Geplaatst door TomCat on 11/26/2018