"Coincidences are the worst enemies of the truth."
- Gaston Leroux (The Mystery of the Yellow Room, 1907)

Just recently, I reviewed Matt Forbeck's The Con Job (2012), the first in a series of tie-in books picking up where Leverage, canned after its fifth season, left off and the crew's incursion of Comic-Con in order to take down a mark reminded me that I had another mystery novel knocking about that treaded similar ground. 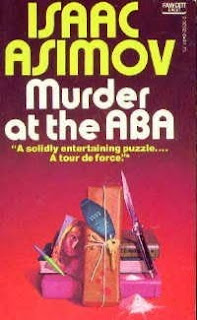 Murder at the ABA (1976) is one of the more conventional mysteries I have read by that most unconventional author of detective stories, Isaac Asimov, and yet, it's far from an ordinary affair or run-of-the-mill. What struck me first about Murder at the ABA were the flashes of "Had-I-But-Known" preceding the discovery of the body, describing everyday trivialities that ended up being flagstones that paved the way for death, something that could've easily been staved off if one of those moments had played out differently or simply had not occurred – which is an unusual approach for a mystery not penned and/or narrated by a female.

Anyway, the dominos began to fall when Darius Just, our five feet two writer and narrator, arrives too late at the 75th annual convention of the American Booksellers Association (ABA) to help out a friend, but before the day is through, he's inundated with requests to talk to his former protégé, Giles Devore.

Giles Devore is what we refer to now as a "Man Child," rising to fame as an author after Just assisted in whipping his first manuscript into shape that gradually became a success story upon its publication. However, there's precious little gratitude for the independent publishing house and small booksellers that took a risk by promoting him, and now he wants to sweep them from his coattail, which gives a lot of people ample motivation to do him – that's what Darius Just believes when he finds Devore's body in the bathtub of his hotel room. There’s also the pile of heroin Just found in the hotel room, before someone swiped it away, and the complex-ridden victim himself, who can not sleep with a woman unless she undresses and baths him like a child, and calling the woman in question "mommy," gives Just and the reader enough angles to keep them guessing what happened.

It’s not the plot that’s the most appealing feature of Murder at the ABA, but its self-awareness as a work of fiction and Just’s interaction with Isaac Asimov – who’s there to do research for his next book, Murder at the ABA. The book is even dedicated to a friend on whom he modeled Darius Just, fellow SF-writer Harlan Ellison, but I have to admit, Asimov’s depiction of his friend wasn’t exactly flattering at times. Not at all like the good-natured chops he saved for himself, but hey, you’re supposed to roast the ones you love.

That being said, the metafictional excesses became a bit wearing after Asimov and Just decided to carry on their light-hearted banter in the footnotes of the story. It stopped being cute after the third of fourth one, but alas, they are there to accompany you to final chapters.

Murder at the ABA was not an unentertaining and at times even interesting detective story with a plot that was basically hung upon "the blinkin' cussedness of things in general," which was better than the suicide-disguised-as-murder explanation that I was dreading – even if it lacked the dearth of clues that put the suicide theory in my head. There are, IMHO, few things worse in a detective novel than have the murder that fueled the plot be revealed as an elaborately staged suicide and I'm glad that Asimov didn't opt for that conclusion. In short: neither extremely good nor awefully bad, but just an average plot that shined a bit brighter due to the unusual approach of its author.
Geplaatst door TomCat on 4/21/2013