The last review that appeared on here, a rundown of Jack Iams' Death Draws the Line (1949), is still smoldering, and while it's already a contender for worst mystery read this year, the final portion of the book that included the Little Polly Pitcher comic-strip served as reminder that I still had to check out the work of an actual comic book artist – who drew and penned an attractive contribution to the locked room sub-genre. 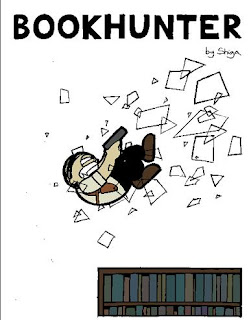 Jason Shiga's Bookhunter (2007) is a modern-historical, set in Oakland, California, 1973, but the fact that the story's protagonist is a special agent, named Bay, attached to the Library Police clues you in that you're still in comic-book land. However, the plot is delightfully classically in tone with a cartoon-y hardboiled edge to it. The story is split up in four chapters, three of them detailing Bay's investigation, and the first introducing him when he's organizing a raid on a "freelance censor," who swiped several political books from the shelves, and has been locating by printing the same book he was targeting with radioactive dye! A confrontation with the self-appointed censor ends in the same way that got a lot of old Looney Tunes episodes canned or censored, "my bladder," before Bay moves on to a more cerebral problem.

The rare book room of the Oakland Public Library had an English bible on loan from The Library of Congress, which "was given to John Quincy Adams by a group of Mendi tribesmen in commemoration of his representation of them in the Amistad slave ship case," and by all accounts, appears to have been spirited away from the library.

There were no signs of forced entry on the outside doors and windows. The fire-escapes were alarmed, but they were last heard the year before. The safe were the book was kept overnight is unscratched. And finally, if the thief got past these obstacles, there is still the stop-point gate that will be triggered by a magnetic strip embedded in the book. Unfortunately, these security measures were to no avail and someone skipped out of there, unnoticed, with a valuable book.

I have to compliment Shiga for planting a false explanation in my mind with his art work that would've made the triple locked room far less complicated, and I think every seasoned mystery fan would latch on to that like it was an actual clue, but the eventual solution was more involved – relaying on the inner workings of a library and the building itself. In a way, the plotting reminded me of Herbert Resnicow and perhaps I should also mention Bill Pronzini's novella "Booktaker," collected in Casefile (1983), because the resemblance between the titles alone speaks for itself. They have completely different solutions though.

Anyway, I couldn't tell more without divulging too much of what is essentially a short story, even if the page count lies somewhere around the 140, and I recommend you read it for yourself – especially if you're a fan of locked rooms, comics and/or bibliophilic mysteries.

All in all, Bookhunter is an off-beat gem that deserves more attention from the mystery readers, combining art that fits the mood of the story with tongue-in-cheek action sequences and meticulous plotting, but let the reader be warned, there's a lot of technical talk on locks and bookbinders lore. Heck, there's enough of that stuff in this story that Julian "Bloody" Symons’ would probably have broken a thumb and forefinger, because he couldn’t slap "humdrum" label on this book fast enough. ;)
Geplaatst door TomCat on 4/04/2013