Jonathan Creek: The Clue of the Savant's Thumb

“The locked room is an exercise in illusion – a magician's trick. Otherwise it's impossible, and the impossible can't be done, period. Since it had been done, it must be a trick, a matter of distracting attention, and once you know what you're really looking for, the answer is never hard.”
- Michael Collins' "No One Likes the Be Played for a Sucker"

The long anticipated return of the sleuth in duffle-coat, The Clue of the Savant's Thumb (2013), aired on BBC One last night and it was an improvement over the last disaster, The Judas Tree (2010), even if parts of the plot echoed previous episodes – and another detective story for that matter. But first things first! 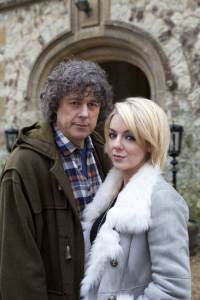 Savant's Thumb opened with a prologue, peeking fifty years into the past, set at Waxwood Hall, a strict convent school, where disobedient girls were locked up in the "Quiet Room" to contemplate and pray. They often emerged with stories of having seen god, but it was also the place where a girl died mysteriously in her bed and other girls woken up to find a red ring on their foreheads – events that have haunted Rosalind Tartikoff ever since.

Rosalind's life, however, has quieted down in the preceding decades and married Franklin Tartikoff, writer-producer and polymath, and together have an adopted daughter, Fariba, but when we met them life has become a bit knottier and complicated. She has a relation with the family doctor and Franklin is plotting something, but then murder in one of his miraculous guises steps in. Rosalind has to look through the keyhole of her husbands study to see Fariba hunched over the bloodied remains of Franklin, before slumping to the ground herself, and snaps a picture of the crime scene with her phone through the keyhole, however, when the door is finally opened they only find Fariba!


A honey of a problem that eventually attracts the attention of two detectives and they both have changed since their last appearance. Rik Mayall reprises his role as D.I. Gideon Pryke from the series masterpiece The Black Canary (1998), but a bullet landed him in a wheelchair – giving him shades of another locked room expert, Cyriack Skinner Grey. However, Jonathan Creek's metamorphosis from an inventor of stage illusions to the world of marketing and having married a wealthy wife is the more astonishing one of the two. And at first, Creek is a bit reluctant to pick up his old hobby, mainly due to his wife, but the problem of a body disappearing without a trace from a locked and watched room proved to be too much of a temptation.


The entire explanation felt like a best-of compilation of the series: the disappearing act with a fainting witness in a locked and watched room was done in Danse Macabre (1998) and the solutions even share some similarities, but the main gist of the trick was eerily similar to one from The Kindaichi Case Files – right down to the clue of the victims hands. That's what put me on to the solution so quickly. Next is the botched magic trick (with a saw) that was also at the heart of The Black Canary and we have seen that ridiculous government conspiracy before in The Curious Tale of Mr. Spearfish (1999).

I was also a bit under-whelmed when I learned how Franklin died. Surely, that could've been done a tad-bit more convincing. Really hope that at least one or two of the new episodes is a return to brilliant and original plotting of Jack-in-the-Box (1997), Danse Macabre, Black Canary, Satan's Chimney (2001) and The Tailor’s Dummy (2003)


In spite of this "patchwork-plotting," I enjoyed most of what Savant's Thumb had to offer, and while I wouldn't rank it among the best in the series, it had its moments that gave me that feeling what proper adaptations of John Dickson Carr and Hake Talbot may look like – which is not a bad thing at all.

Conclusion: not a perfect but nonetheless promising re-start of this series and looking forward to 2014.
In case you missed it, I posted a list of real-life, but little known, locked room mysteries and impossible situations over the Easter Weekend and might be fun follow-up to this review: Just About As Strange As Fiction: Day to Day Miracles. I also reviewed the Jonathan Creek episode Time Waits for Norman (1998) last year.
Geplaatst door TomCat on 4/02/2013