Just About as Strange as Fiction: Day to Day Miracles

"The most incredible thing about miracles is that they happen."
- Father Brown 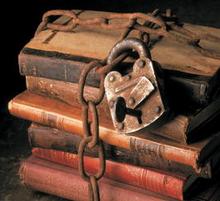 "Oh, that never happens in real life" or "lack of realism" are tired old platitudes that are wheeled out every so often to demonstrate the artificiality of the mystery genre and no other trope is more detached from our day-to-day life than the Locked Room Mystery. That is, if you ignore actual cases like the seemingly impossible murders of Isidore Fink and Laetitia Toureaux or coffins being swung around in sealed crypt on the island of Barbados, but in my wandering on the internet I found many examples of domestic miracles – showing that the locked room problem is a lot more common than most people think it's.

Example #1: The Problem of the Intoxicated Thespian

The blog Shadowplay has post dating from 2008 describing an anecdote involving actor and funnyman Wilfred Lawson, "one of the few actors who could function quite well with a skinful," and was locked into a dressing room before a radio interview – hoping it would prevent him from getting drunk. When they returned after an hour and opened the door, they found Lawson hammered and nobody knew how he got his hands on the demon rum. The comment section is rive with every solution imaginable and the one that immediately sprang to my mind was that he bribed someone on the outside to poke a straw through the keyhole, but that one was already offered. So to safe my reputation as the blogosphere's resident locked room enthusiast, I'll give one more solution to this problem.

Sometimes, actor's pick up a skill or a trick through their work, the cast of Leverage was trained in pick-pocketing, and I can imagine that a professional drunkard has few tricks up his sleeve. What if... Lawson was armed with a flask of hard liquor that he slipped into the pocket of the minder before going to the dressing room, shook his hand or gave him a pad on the shoulder at the door, so he wouldn't feel the other hand fishing the flask from his pocket, and spend the next hour getting drunk. Upon the return of the minder, Lawson slipped the flask back into the pocket of the minder and probably retrieved it after he and/or the room was searched.

Example #2: The Cat Who Created a Miracle

Jill McGown was a contemporary mystery writer of the inspector Lloyd and Judy Hill mysteries, who died in 2007 at the age of 59, and, from what I heard, her earlier work is very much in the Golden Age vein – and in the opinion of Douglas Greene she was one of the best. That got my attention and Google'd her name to find a homely tale on her website of her cat who made an attempt at outdoing Edgar Allan Poe at his own game. Here's the story in McGown's own words:

"I came in to find Greta polishing off Frankie's Go-Cat (she starts with the tinned food and moves on to the dry stuff). She shot past me, towards the front window, the way she had come in. The window has two large panes that open from the side, and a little one between these two that opens from the bottom. It's on a cantilevered hinge, so when you open it, there is a space above and below it. Greta jumped, landed on top of it (on the side of the glass that is outside when the window's closed), squeezed through the gap, and took off, kicking it with her back feet as she launched herself into the air, which action neatly closed the window behind her. If I had come down a moment later, I would have found the house catless, the cat food gone, and the windows all securely shut. Edgar Allen Poe couldn't have done it better."

I applaud McCavity Greta for creating this ingenious little locked room that could've been easily incorporated into a story: a straight forward murder case becomes a bone-fide impossible crime, because the victim's cat accidentally closed the killer's exit. You can find McGown's original post here.

Example #3: You're Gonna Carry That Weight

To be completely honest, I have no way of confirming the veracity of the next story that has been floating on the internet and apparently came from a book of unsolved mysteries – entitled Mysteries of the Unexplained (1992?). Anyhow, the problem that baffled the police involves the Dowing Construction Company of Indianapolis and a five ton steel wrecking ball hanging from a crane 200 feet above the ground that vanished overnight in 1974.

My initial theory was that the ball was lowered into a hole in the ground and buried. Motive? Sabotage. Practical joke. Payback from employees on the boss. You name it. But the best solution came from "Samskara," at the JDCarr forum, who proposed this gem of an explanation:

"Alternately, another crew on a job elsewhere in town might have found that their 1 ton wrecking ball simply wasn't up to the job. They came over with a suitable truck, lowered the 5 ton ball into the back of the truck, drove back to their own site, and switched the wrecking balls. This would reduce the amount of time and activity at the site from which the ball disappeared, and the missing ball would be rather like the purloined letter -- invisible in plain site."

Example #4: Wizards in a Laboratory

James Randi has been a bane to the spiritualists' society, homeopathic industry and paranormal claimants as a debunker. The James Randi Educational Foundation even has The One Million Dollar Paranormal Challenge to "eligible applicants who can demonstrate a supernatural ability under agreed-upon scientific testing criteria," but nobody to date has lived up to the challenge. However, there's a two-part interview with James Randi and Michael Edwards on their YouTube account that shows if Randi, and his companions, had less scruples they could've fooled millions of people.

In the video Randi and Edwards are reminiscing about Project Alpha that hoodwinked an entire group of para-psychologists into believing that a couple of kids possessed psychic powers. It was an elaborate hoax to show how easy it was to even fool "scientists" who were willing to believe instead of investigate and one of their tricks was creating a psychic storm in a sealed laboratory. You can watch the videos here and here (the locked room story can be found in part 2).

This one is a personal favorite of mine and also involves James Randi when he debunked James Hydrick, who looks like the illegitimate child of He-Man and Morticia Addams in his confrontation with Randi, and his extraordinary claims of having "unlocked" the powers of his mind – even giving a demonstration in the studio by flicking through the pages of a telephone book with his mind! I admit it, I was impressed the first time I watched that video, but only because I recognized it as a good and unusual magic trick. Watch the magician who explains miracles in action for yourself.

Example #6: Where Have You Gone, Professor Van Dusen?

Back in 2007 (I think), the NYPD released a video that showed a white car pulling off drunken maneuvers, seemingly impossible bursts of speed that ended with the phantom car phasing through an chain-link fence without smashing it. The accepted concensence appears to be that only the top of the fence was secured, basically working as a garage door, snapping back into place when the car had passed through. It's definitely a problem that would've piqued the interest of Professor S.F.X. van Dusen, a.k.a. The Thinking Machine, who solved a similar puzzle in "The Phantom Motor."

Well, these are my White Queen’s half dozen of impossible things that nobody has probably ever imagined, let alone before breakfast, but nonetheless happened outside the confines of a detective story – some of them of a very domestic nature. The locked room may be one of the most timeworn tropes of the genre, making its first debut in Edgar Allan Poe's "The Murders in the Rue Morgue," but that's because it has always been the most popular ride in the park and for good reason! If done well, it adds an extra layer of mystification to the plot, and more often than not, an impossible situation (like a theft of disappearance) can carry an entire story without a single body hitting the floor.

Hopefully, I have demonstrated with this post that aren't just figments of imagination that belong on the pages of a Victorian mystery, but actually occur in the real world. McGown's eyewitness account shows that they sometimes just happen. I see opportunities instead of a tired old cliché.
Geplaatst door TomCat on 3/31/2013