Alice Williston is pried loose from Sleep's embrace when a persistent buzzer disturbs the peaceful hours of an early April morning, but the doorman informs her that the person will call back at a more convenient time – after which she decides to freshen herself up and make coffee for her companion, Jimmy Madena. Alas, even a brew of the strongest, blackest coffee lacks the potency to revive the dead and Alice is charged with Jimmy's murder.

This is the premise of Murder One (1948) by Eleazar Lipsky, a lawyer and prosecutor with a couple of movies to his writing credits, Kiss of Death (1947) and The People Against O'Hara (1951), and evidently drew from his legal career when he began to write. And to be honest, the peeking around in the District Attorney's office in Murder One was more interesting than the story itself. 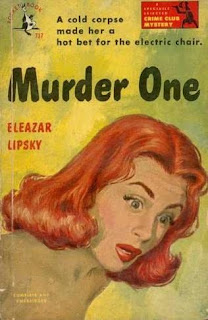 Esau "Easy" Frost is the Assistant District Attorney who's charge of the Madena case and offers Alice repeatedly a plea-bargain, but she refuses to admit that she was responsible for Jimmy's death – and he's convinced that she did it and reluctantly charges her with Murder One. Frost is described in the Cast of Characters as "a real lawyer who will stick his neck way out to be fair to a defendant," while technically true, he’s not exactly a White Knight either. He has a nasty taste for psychological torture, or "the fourth degree," as he likes to call it, and excuses himself by stating that he abhors physical violence. I understand this attitude towards a cut-throat gangster, who's pleading for his life in the death-house as his date is coming up, but keeping a witness from seeing his dying wife? A tacky move, if you already have your guy and his methods made him about as unlikable as Thatcher Colt in The Murder of Geraldine Foster (1930).

The upside is that this book, which can be described as a hardboiled police procedural/courtroom drama, follows Frost around in the D.A.'s office and I think this is the first time I saw such a character being involved in more than one cases – even if they have no bearing on the case the story is focusing on.

I already mentioned Frost's visit to the death-house, where he turned down a high-ranking mob boss who suddenly had second thoughts on the plea-bargain he had turned down, but he's also informed that the police has dragged a headless body from the river and sits-in on a meeting to decide what direction they would take on a number of murder cases. One of them was very reflective of the time: "a drunken throat-cutting of a harmless old Negro building superintendent by a white neighborhood hoodlum. There was no motive beyond savagery, but the proof of premeditation and planning was clear," however, "despite the delicate racial issue," they voted to take the plea and safe the man's life. This attitude demonstrates why even Frost's "gentler" fourth degree is dangerous. What if that old man had turned on his attacker and killed him, legally, in self-defense, but, still upset and confused over having killed someone, cracks under either their strong-arm methods or Frost's mind games and confesses to cold-blooded murder – giving them no reason to go for Murder Two. No doubt they could drum up witnesses of the victim antagonizing the accused in the past and present it as a motive.

And the saddest part of that is that the situation I just described would've made for a far more interesting story. Julian "Bloody" Symons would probably have adored Murder One for it's realistic portrayal of law officials (Frost has a wife and kids) filled with questionable police methods, professional crooks and loose morals, but it all boils down to Frost circling Alice, and when it's time to wrap up the story, pulls a pair of "surprise witnesses" from his sleeve. Needless to say, the conclusion left me under whelmed.

Lipsky had put quite a distance between himself and the traditional whodunit with Murder One and you could identify it as an ancestor to the kind of crime novels that still occupy the bestseller lists today, but as misguided as Lipsky may have been (hey, I'm a classicist!), his professional knowledge of the machinations of the law provided us with a keyhole in time to peek through. Otherwise, this was not my kind of crime novel.
Geplaatst door TomCat on 3/16/2013