“Talking's something you can't do judiciously unless you keep in practice.”
- The Fat Man (The Maltese Falcon, 1930)

The award-winning curiosity, Footprints (1929), was my first foray into Kay Cleaver Strahan's writing, and while it was an engaging story depicting life on a Oregon ranch during the early 1900s, it lacked finesse as a proper detective story – i.e. neglecting to supply the full solution. We learn the name of the murderer, in an off-handed way, but not how this person escaped from one of the locked bedrooms or walked over a field of snow surrounding the house without leaving the titular footprints. 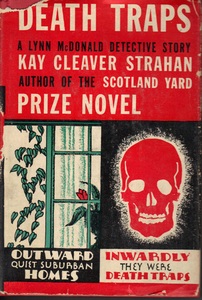 However, as little known as Strahan is today, she was known as a versatile mystery writer who penned variegated detective stories, varying her approach to the genre with each novel, which seems tenable after having read Death Traps (1930). Footprints may have been a more captivating story, but in the end, Death Traps proved to be a better mystery novel! The main protagonists in Death Trap are two old codgers, a Mr. Lucky and a Mr. Fisbee, and large portions of the story consists of conversations between the two discussing the crimes that have taken place in their respective homes, "death traps," as Mr. Lucky calls them, situated in an exclusive residential district, Calla Heights, in San Francisco.

Mr. Bezaleel "Uncle Buzz" Lucky is a self-styled millionaire and retired green grocer from Yoncalla, Washington, and a guest at the home of Judge Amos Dexter where a mysterious shooting takes place in the sunroom: Gerald Dexter, son of, is shot and wounded, and his brother, Bob, is presumed guilty. A cover-up, of sorts, takes place. Guns are taken or turn up. A French window that may have been latched suggests a locked room problem, but there's no mistake about the impossible circumstances surrounding two deaths next door. Mr. Timothy Fisbee is a fidgety, suspiciously-minded old man who stays with relatives, Mr. and Mrs. Justin Veerneg, both of whom, one faithful morning, fail to answer the persistent knocking on their bedroom door (locked from the inside, of course!). The police had to cut a hole in the window screen and found the two peacefully slumbering in their bed, dead for several hours and many more to come! The house wasn't piped for gas and poison seems unlikely, but how then did the Veernegs die?

Strahan's series detective and seasoned crime analyst, Lynn MacDonald, provides an answer for this locked room conundrum, but otherwise, she's a non-entity who only really appears towards the end as a deus ex machina – just not exactly as we mean when we use that phrase. Just read the book.

Anyhow, the solution to the locked room is a good one and I did a bang-up job at solving it too, but than again, I had an almost identical idea for a similar impossible situation. So I caught on fairly quickly. Unfortunately, there's one method now that I have to dump from my bag of dirty tricks and murderous ideas!

I guess the rest of the story is somewhat marred with many irrelevancies and prattle from the main characters, but I rather enjoyed how they were engrossed in the problems facing them and came up with false solutions and dummy cases – in the spirit of the dodgy characters populating Christianna Brand's detective stories. Death Traps may not be the best mystery novel produced during the 1930s, but with its excellent locked room and good enough solution, a fairly well played hand with the least-likely suspect card, it was a mountainous improvement that looms over its predecessor. I think I'll give Strahan another shot somewhere down the line.

On a completely unrelated note, but halfway through writing this review, I came to the stunning discovery that "unwakeable" is not a word, which makes me want to find a detective story about a murdered lexicologist so I can use the post title, "The Unwakeable Lexicographer." Childish, I know.
Geplaatst door TomCat on 3/02/2013