A Twist in Time

"I started playing so I could link the distant past to the far future."
- Hikaru Shindo.

I've always had an affinity for crossovers, which, alas, are scarce in the mystery genre, but every now and then, one rises to the surface. The rotating writing team that once operated under a number of pennames, including Patrick Quentin and Jonathan Stagge, wrote one, Black Widow (1951), where Lt. Trant cast Peter Duluth as the main suspect of his murder investigation and The People vs. Withers and Malone (1963) has Craig Rice and Stuart Palmer's series detectives facing off against Murphy's Law – and gave me one hell of a dream!

The mystery writing husband-and-wife team of Bill Pronzini and Marcia Muller have occasionally pooled their talents, and as a result, The Nameless Detective and Sharon McCone inhabit the same universe and I recommend Double (1984), if you have never seen them on a case together. However, Beyond the Grave (1986) may have been their best collaboration from that period. It presents the reader with the alluring problem of a hidden treasure of religious artifacts, hidden in 1846, that leaves a streak of crime through history – and it takes the combined skills of two detectives, a hundred years apart, to solve it. 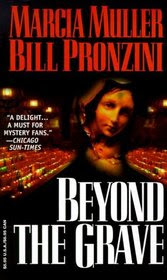 Beyond the Grave opens with the only part of the novel that takes place during 1846, when Rancho Rinconada de los Robles, the estate of Don Esteban Velasquez, fell during the Bear Flag Revolt, but not before trusting Padre Urbano with stowing away his family treasure. The padre died during the siege of the ranch and the cache of artifacts evanesced from history. We move from the 1840s to the 1980s, where Elena Oliverez, curator of the Museum of Mexican Arts in Santa Barbara, who solved a locked room murder there in one of Muller's solo novels, The Tree of Death (1983), finds a sheaf of papers in a marriage coffer she purchased at an auction. It's part of a report dating back to 1894 from a private investigation firm named Carpenter and Quincannon, Professional Detective Services!

According to the report, Felipe Velasquez, son of Don Esteban, engaged Quincannon after a golden statuette of the Virgin Mary, the name of his father and date etched into the gold, turned up and wants him to follow the trail – in the hope of recovering more of his father's lost collection. Meanwhile, in the future, Elena tries to piece together the past and find other scraps of Quincannon's report. The construction of the plot is not entirely dissimilar to Ellery Queen's A Study in Terror (1966), in which Ellery Queen devours one of Dr. Watson's unpublished manuscripts accounting Sherlock Holmes' involvement in the Jack the Ripper case, but Elena is much more involved than Ellery and does more than providing a part of the solution. Not to mention that she actually has to look for Quincannon's papers in order to read them and it was a nice touch to show that she was still a museum curator, and that she couldn't just take time-off to indulge in a personal interest at her leisure. Ellery also didn't have to deal with a present day murderer near an abandoned grave.

But than again, Pronzini and Muller are as good at shaping characters as they are at crafting plots, but that also gave this book an aura of melancholy. Elena Oliverez has a fair share of personal issues troubling her, like a hospitalized mother and a wrecked relationship, and Quincannon has sworn off the demon rum and convinced that Sabina's resilience against his advances are weakening, but it's sad to think about when they're referred to in the 1986-parts as the long-dead detectives. The separation in time makes Quincannon's problems, and Elena's own worries, seem like trifles that are, or will be, dust particles in time. I have mentioned before that Carpenter and Quincannon are my favorite Pronzini/Muller characters (sorry Nameless and McCone) and I like to think that they were cut from the same ephemeral material as Sherlock Holmes and Nero Wolfe.

However, Carpenter and Quincannon's mortality does not damage the pleasure I got from Quincannon and Oliverez, a private-eye from 1890s and an amateur snoop from the 1980s, tying together an intrigue that began in 1846, picked up in 1894 and finally ended in 1986 – and thought almost the same as Oliverez before she shared this final sad reflection, "I wished I could tell him the way it had ended." Luckily, there’s nothing deterring you from learning how this bloody 140 yearlong treasure hunt ended, but to fully appreciate this story, you should be acquainted with the characters before picking this one up.

Finally, I have to point out a continuity problem when compared with The Bughouse Affair (2013): Quincannon mentions in Beyond the Grave that he’s a read a collection of short stories by Conan Doyle and purposely mimics Sherlock Holmes' speech, but in The Bughouse Affair he's talked about as an actual person – a contemporary detective of Quincannon! Of course, we can assume that in this universe "Conan Doyle" is merely a pseudonym for Dr. Watson choose and probably picked that name because it was the name of a young a man who published a prosperous story, "J. Habakuk Jephson's Statement," that some people took as a true eye-witness account of what happened aboard the Mary Celeste. Who would take any thing that guy wrote now as anything but fiction! It was a perfect cover and the reason why everyone at the time of Beyond the Grave assumed he was a storybook character. Their real names were probably Sheringford Homes and Dr. John Smith. It also explains why the real Doyle was fed-up with Sherlock Holmes overshadowing his other actual work and must have been thrilled when Dr. Smith send him the account of his friends final adventure at Reichenbach Falls. I think I would made a great conspiracy theorist.

I hope the time between now and the next review will be a lot shorter.
Geplaatst door TomCat on 3/24/2013