Ed McBain was perhaps the best known penname of the late Evan Hunter, a prolific author of crime and mystery novels, whose 87th Precinct stories are still being praised for its portrayal of a policemen and their daily struggle against crime, but I have seen McBain's work only in diluted form – like his completion of the unfinished manuscript, The April Robin Murders (1958), that Craig Rice left behind upon her death. 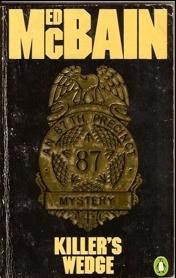 I have wanted to sample one of the 87th Precinct novels ever since my radical attitude towards post-WWII mystery writers began to taw, but before that fairly benevolent proprietor of Pretty Sinister Books posted a review of Killer's Wedge (1959), describing a hostile cat-and-mouse game with a locked room puzzle looming in the background, I had nothing to aim for. Well, it still took a year and a few months for it to reach the top of the pile, but it got there and sometimes it's worth to be picky when tackling a new writer.

A large slice of the story told in Killer's Wegde takes place in the squad room of the precinct, where a group of detectives are being held hostage, which began when Virginia Dodge sailed into the room brandishing a gun and a bag containing a jar of nitroglycerine!

Dodge is described as Death personified, "she had deep black hair pulled into a bun at the back of her head... brown eyes set in a face without make-up, without lipstick, a face so chalky white that it seemed she had just come from a sickbed somewhere," who's more than willing to complete the illusion by announcing that she has come to kill Detective Steve Carella. Dodge holds their colleague responsible for the death of her husband, who died in prison, and I wonder if the writer of Columbo had this book in mind when they wrote Rest in Peace, Mrs. Columbo (1990), which is not out of the question, since a few episodes were based on stories by McBain. Anyway, the wedge in her plan is that Carella is out on a case and so they have to wait until he returns.

The case that requires Carella attention stands in stark contrast to the premise set fort in the first chapters and throws the reader back to the days of Agatha Christie and John Dickson Carr, who's referenced when Carella muses over the case. It appears as if the patriarch of the wealthy Scott family, and business tycoon, took his own life at his mansion by throwing a rope over a beam and tying the other end to the doorknob in a windowless room – bolting the door from the inside before hanging himself. The door had to be practically destroyed at the seams with a crowbar to gain access, and not before cutting the rope, which makes suicide a very tenable theory. Interestingly, the reader becomes privy of information that never reaches Carella, who has to reach the solution by pure reasoning – giving the reader an extra edge over the detective.

I suspected the correct solution even before forensics confirmed that it was murder, but I still enjoyed it because I have been on the look-out for a locked room mystery that would use it. The crux to the create the locked room is so simple and obvious that I have always been convinced that it had to been use, and it was proposed as a false solution in a novel from the 1930s, but never as the actual explanation and I have to give it to McBain for how he handled it.

Meanwhile, back at the squad room, the tension is slowly becoming unbearable as the detectives and Dodge engage in a dangerous battle of wits, a swelling pool of hostages (consisting of a wounded cop and a prisoner), several attempts to communicate with their (dense?) colleagues, but the shrew has firm grip on the gun – and all the while she keeps everyone guessing whether there's actual nitroglycerine in the jar. McBain weaved two separate stories, a character-and a plot driven one, together into a great, snappy page turner that was, for me, an excellent introduction to his 87th Precinct series. It's obvious that the author of Killer's Wedge embraced the new direction that crime fiction was taking at the time, but it's gratifying to see McBain was also one of those writers who occasionally glanced in the rearview mirror to determine how well he was going down that new route. As a result, Killer's Wedge is a book that can be appreciated by detective and thriller/crime fans alike.

Sergio from Tipping My Fedora also reviewed this book a while ago and delved deeper into the characters populating the plot. I'm just here to give the plot my stamp of approval.
Geplaatst door TomCat on 3/29/2013