"I am too old a crow to believe that a random deduction of mine is necessarily true... but I suggest it, my friend. I suggest it. And unless you can satisfy me that it is not the truth, I am going to make matters warm for you. Very well."
- M. Henri Bencolin (John Dickson Carr's The Four False Weapons, 1937)

Rufus King was an American mystery novelist who created a number of series-characters, such as Reginald de Puyster, Stuff Driscoll and Dr. Colin Starr, but his primary and most successful detective was a New York policeman, Lt. Valcour – who made his first appearance in the very unusual Murder by the Clock (1929). I only read one other of King's Lt. Valcour novels, The Case of the Constant God (1938), before, perhaps unfairly, shelving him away as a poor man's Ellery Queen. 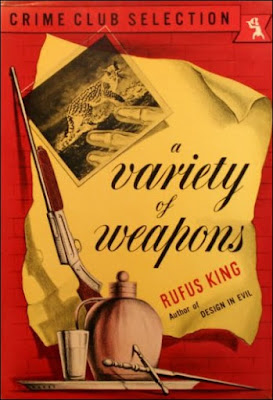 Lately, I came across several reviews of King's detective novels, which tempted me in returning to his work for a second glance and there were two potential candidates on my TBR-pile: Murder by Latitude (1931) and A Variety of Weapons (1943). The former received glowing comments from both readers and critics, but settled down for the latter, because the premise and the book-title suggested the story fell into a rare, sparsely populated category of the genre – one that (so far) consists only of G.K. Chesterton's "The Three Tools of Death" (The Innocence of Father Brown, 1911), Ellery Queen's "The Hanging Acrobat" (The Adventures of Ellery Queen, 1934) and John Dickson Carr's The Four False Weapons (1937).

Well, this turned out not to be the case, however, the book was, as Anthony Boucher described it, deftly characterized with "sly shifting suspense" and "a puzzle of Kingly dexterity." It also oddly managed to be a very unconventional mystery that operated well within in the confines and conventions of the traditional detective story. If that makes any sense. Anyhow...

A Variety of Weapons is a standalone novel, originally serialized in Redbook as The Case of the Rich Recluse, which has a young woman as its main protagonist.

Ann Ledrick is slowly making a name for herself as a photographer of animals and already won an award for "a stunning shot of a Manx cat," which landed her job at the barely accessible estate of the titular recluse. Justin Marlow is fabulously wealthy and lives at a place called Black Tor, tucked away in the heart of the Adirondacks, where there are no roads, but the four thousand acres of private land has its own landing field – providing the safest way of reaching the isolated community. There are rumors, aimed at discouraging uninvited guests, that "entire safaris have perished from starvation while attempting to track to the house itself." So the place is really remote and practically inaccessible.

Marlow wants Ann to come down to Black Tor to snap a ton of pictures of the ocelots that belong to his cousin, Estelle, but it becomes apparent they've an ulterior motive for flying her down to the estate. A reason that's attached to a family tragedy and an ever increasing pile of bodies.

Twenty years ago, Marlow's only son was found standing over his pregnant and mortally wounded wife with a blood-stained knife in his hand. He was accused of having stabbed her while "she was playing Chopin on a spinet," put on trial, sentenced and executed on the electric chair, but his father never believed him to be guilty. Old Marlow "fought like a tiger to clear his son," right up to the execution, but rumors say he went cuckoo after failing to save his son. And this may have resulted in some additional deaths. Several of the men who were involved with his late daughter-in-law died before their time in hunting accidents or succumbed to food poisoning, which whispers say were murders with "a Machiavellian touch." 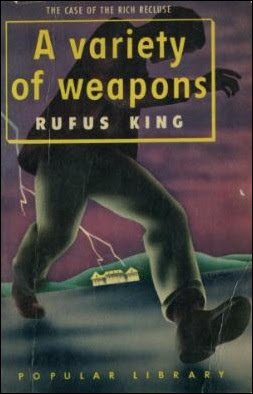 I do not think most readers will have too much trouble figuring out what role the twenty-something Ann played in this drama, because it's mentioned, very early on in the story, they "did a Caesarean" on the dying woman in order to save the baby. So Ann finds herself cast in the role of an unexpected and tragic heiress, but one who inherits more than just money from her newly found grandfather.

Marlow was already a dying man when Ann arrived. The victim of a slow, destructive poison and on his deathbed he handed her the torch of his private-investigation into the murders that have taken place on the estate – making it now her task to prove her father did not stab her mother. It's not a task that's entirely without danger. However, the second half of this novel is far more detection-orientated than the first one, which had a surprising amount of logical clues that instinctively make you glance in the direction of the killer. Such as the nature of the later murders of the men and "the white back" that was seen behind a rainy window of the music room on the night of the murder twenty years before. A clue that, by the end, recalled Agatha Christie's 4.50 from Paddington (1957).

There were also two interesting animal-related clues: why did the dog of Ann's mother, a Chow, not defend its master when she was being stabbed, but, instead, "trembled on her cushion" and made little noises? The second clue is the affection Sgt. Hurlstone, of the State Police, gives to a black cat, but animal-lovers will probably frown upon his reason for keeping the animal so close to him.

Of course, this positive review of a mystery novel, I genuinely enjoyed, would not be complete without me nitpicking about something small, because (minor) imperfections are there to be dragged out into the light of day.

First of all, there's the poison that was slowly killing Marlow. It is, in fact, a slow-acting poison, but some of the details were questionable and sounded as if King got them from the pages of a lurid pulp-thriller. However, this is unquestionable one of the earliest examples of such poison being used in crime-fiction and "the grim result of the skeleton bones in silver on the films" was a nice touch. Secondly, the motive could not really be deduced based on the given evidence, but motive is of secondary importance to most readers. As long as the who (and how) can be deduced. So that won't spoil the book for most readers.

So, all in all, I found A Variety of Weapons to be a better mystery than either Murder by the Clock or The Case of the Constant God, which nicely balanced a fairly clever plot with elements of suspense – planted in a traditional, but unusual, setting with a strong cast of characters. King really redeemed himself here and Murder by Latitude has now crawled to the top of my TBR-pile.
Geplaatst door TomCat on 1/27/2017