Castle of the Damned

"...it was impossible for the murderer to make his escape either naturally or supernaturally."
- Joseph Rouletabille (Gaston Leroux's The Mystery of the Yellow Room, 1907)

Back in early 2015, John Pugmire's Locked Room International published an English translation of La maison qui tue (The House That Kills, 1932), which was written by a real-life juge d'instruction (examining magistrate), Noel Vindry. The book was the opening salvo in his celebrated M. Allou series, all of them published during the thirties of the previous century, but this long anticipated translation proved to be a dud and got a tepid reception – some reviews were quite harsh in their condemnation of the book. 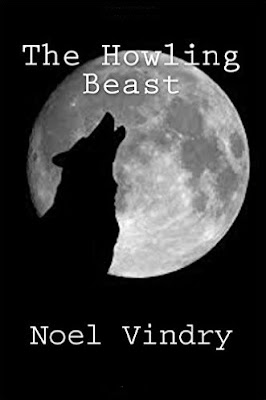 So, not a very auspicious beginning of Vindry's first excursion into the English-speaking world. Regardless of his initial reception, Pugmire was evidently not prepared to give up on Vindry and published a translation of La bête hurlante (The Howling Beast, 1934) in 2016, which seems to have redeemed Vindry to the mystery readers outside of the Francosphere. As a matter of fact, The Howling Beast is rapidly securing a reputation for itself as a recently unearthed classic from the genre's Golden Era and this praise is as valid as the criticism that was leveled against The House That Kills.

One other common theme, emerging from the commentary, is how difficult the book (apparently) is to review, because it has an unusual structure and an important sequence of events takes place in the final leg of the story – which consists of no less than two impossible murders. However, I don't see a problem where reviewing the story is concerned. It can be done without giving any vital plot-points away.

The overarching structure of The Howling Beast is very similar to G.K. Chesterton's "The Dagger with Wings," from The Incredulity of Father Brown (1926), which (largely) consists of a conversation in which a series of inexplicable events are related to Father Brown. Vindry took a similar approach when his series-character, M. Allou, meets a very peculiar individual on a holiday: a tall, bony-faced man with a broken nose who makes eye-contact with the magistrate and says the damndest thing, "I haven't eaten for three days, monsieur."

Curiosity aroused, Allou takes the man to a small restaurant and there he learns that the man, who's named Pierre Herry, is on the run from the police. Herry is the suspected perpetrator of a double murder committed in an ancient, desolate castle situated on the outskirts of Versailles.

Allou had "experiences with tricksters in the past" and knew there was only way to catch them out: oblige them to betray themselves by having them "describe everything in minute detail." So he encourages Herry to relate the whole story to him and the events surrounding the eventual murders covers a long period of several years, but the most important thing to note here is that his story can be divided in two parts. The first two-thirds is very reminiscent of one of Conan Doyle's fancies, while the final quarter (including the impossibilities) could have been dreamed up by John Dickson Carr.

Herry tells Allou about his friendship with Comte de Saint-Luce, a big-game hunter, who owes his life to Herry's interference when a wounded tiger turned on him. So, naturally, this inspired friendly feelings, but several years passed and when Herry happened to be in the neighborhood he decided to pay a visit to the castle of his old hunting buddy – only to get a very cold welcome. Obviously, he was an unwanted guest. An intruder even. Saint-Luce turned about and insisted he stayed the night, which hurled him into a string of strange events. One of the house guests, a Serbian engineer named Carlovitch, vanishes from the premise and left behind his wife, Sonia. A night-time attack is made on Herry and he hears the titular howling coming from outside of the castle walls.

So his first stay at the fourteenth century castle was very eventful, but nothing compared to his second visitation, which took place after spending four years in India and found a strange situation upon his return – one of them is that Sonia took up residence at the castle. But there were also threatening letters. Saint-Luce has the statuette of a sacred Buddha in his library and boosted how he had taken its "from one of the temples in a particularly barbaric fashion," but now there a demands for its return. One note states, "when the beast howls for a third time, you will die."

So, as noted before, the first two-thirds of the plot really feels like a Conan Doyle story and in particular three of his four full-length Sherlock Holmes novels, which are The Sign of Four (1890), The Hound of the Baskervilles (1902) and The Valley of Fear (1914). You can say this part of the story is a throwback to the Victorian-era sensationalist novel and does not, necessarily, present a genuine mystery to the reader. However, this portion of the novel is littered with hints and clues that will come into effect once the murders have occurred.

Here's where the review becomes somewhat tricky: the murders occur very late in the book, when gunshots are exchanged in close quarters, which looks very dire for Herry, because nobody else seems to have been in a positions to fire the fatal shots. The rooms in question were either locked, bolted or guarded and the castle, as established in earlier chapters, is a completely sealed environment – precluding any outside interference. So Herry found himself the favored suspect of the local police.

Luckily, for him, Allou reasoned an alternative explanation from his account and given evidence, which is very Carrian in nature. However, it anticipates some of his most famous locked room novels, but the germ of this idea might have originated from Georges Simenon's "The Little House at Croix-Rousse," a short story from the late 1920s, which can be found in the locked room anthology All But Impossible! (1981). This would be funny since The Howling Beast opened with an introduction, entitled "Noel Vindry and the Puzzle Novel," pointing out how much Simenon "disdained the puzzle novel," because it was too rigid and "too much under the influence of Anglo-Saxon writers."
So, to make a long story short, The Howling Beast was an excellent detective novel to start the new year with and an early candidate for the pile of best detective stories read in 2017. It definitely made up for the sub-par The House That Kills.