Major Sir Henry Lancelot Aubrey-Fletcher was an English baronet who fought in the two World Wars with the Grenadier Guards and held the positions of High Sheriff and Lord Lieutenant of Buckinghamshire, but Major Sir Henry's greatest service to his country was performed under a pseudonym, "Henry Wade" – plastered on the covers of more than twenty detective novels. Barzun & Taylor considered Wade to be "one of the outstanding authors not only of the thirties," but "also of the immediate post-war period." Particularly his earlier novels are well thought of by classic mystery readers. I had only read Constable, Guard Thyself! (1934) and Heir Presumptive (1935) years ago. So it was about time I returned to Wade and Detective-Inspector John Poole. 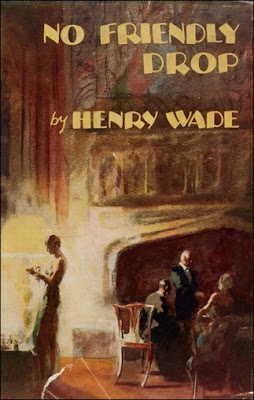 No Friendly Drop (1931) is Wade's fifth novel and the second one to star his series-detective, Detective-Inspector Poole, who made his first appearance in The Duke of York's Step (1929). This one has been on my wishlist and big pile ever since reading glowing reviews from Nick, Patrick and "D for Doom." Having now read the book, I can say No Friendly Drop can be counted among the best of the British country house mystery novels. A story presented as typical, almost idyllic, country house mystery, but the devil is in the details and the nigh perfect plotting has a genuine and moving tragedy hidden underneath.

Tassart Hall, in Brackenshire, has been the ancestral seat of Lord Grayle's family for centuries and he loved both "the old-world furnishings of Tassart" and his dear wife, Lady Grayle. She was "passionately devoted to her husband," but dark clouds slowly gather over the country house.

Lord Grayle is nearly sixty, happily married and very popular in the region, but poor health made him a sad, delicate man that prevented him to make "use of his natural ability and opportunities" and lately developed a neuralgic tic – attacks of acute pain could drive him into a state "far more serious than the disease itself." On top of that, the cost of running a big estate has doubled in post-war England. And on the way of being taxed out of existence. Their son and their ambitious daughter-in-law, Lord and Lady Chessingham, disapprove of Lady Grayle not only refusing to cut back on her royal allowance, but even exceeding it. But nothing out of the ordinary for the time, which makes what happens next so devastating.

One morning, the household finds Lord Grayle unresponsive in his bed and Dr. Norman Calladine suspect he might have died from an overdose of medication, but a tabulation of the time of death and medication left shows something doesn't quite add up. Chief Constable knows "this is going to be an extremely awkward case" involving "one of the best known and most respected families in the country." So he decides to call in Scotland Yard who send Detective-Inspector John Poole down to Tassart Hall. Poole comes to the conclusion that he has deeply perplexing murder case on his hand without an apparent motive. Everyone agreed Lady Grayle's "love for her husband was the strongest and most genuine feature of her character." Lady Chessingham was hardly going to push colorless and pompous husband "into an earldom and the Cabinet over the dead body of her father-in-law."

So while they are all flawed people, overly generous, extravagant, ambitious or pompous, none of them are truly evil people who had a need to bump off of the beloved family patriarch – which would have netted them only a few hundred pounds or a heavily taxed estate. Lord Grayle's death actually forces his widow to make serious financial cutbacks. Not quite the cast of vultures commonly associated with these English country house mysteries. Even more uncharacteristically is the character who becomes the focal point of the police investigation. 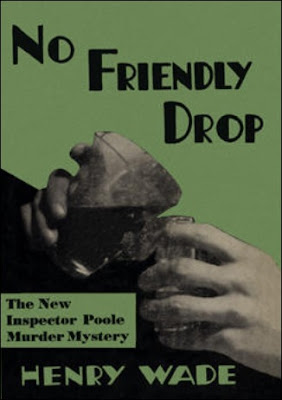 A tired, completely untrue cliché of the detective story is "The Butler Did It," because a butler is practically part of the furniture and the least likely person to suspect. I can think of only a handful of detective stories in which the butler turned out to be murderer. I cringed every time. No Friendly Drop did things a little bit differently by dragging out the butler of Tassart Hall, James Moode, whose messy financial and private life attracted Poole's attention. Poole strongly suspects Moode of being in the middle of a lucrative scheme to secretly replace the valuable antique furniture at the hall with copies, but, as he digs deeper, Poole begrudgingly admits to himself that even Moode "could not be altogether a bad lot." Continuing the theme of the flawed family members without a pressing motive that really holds up. But then the problem deepens even more when the autopsy report comes in.

Lord Grayle had been given a "skillful mixing" of two poisons, di-dial and scopolamine, which were only lethal in combination. The doses were administrated hours apart. So why did the poisoner use "two stones to kill one bird" and what was the vehicle of the poisons? Poole knows "it's always a risk to leave a poisoner out," but decides to treat very carefully and not always ask the important questions as he hopes to lure the murderer in a false sense of security. Very much to the chagrin of the county police. And they appear to be justified when a second person is poisoned. A poisoning as mystifying as the first one that at the same time brings a great deal of clarity to the problem. I didn't realize just how fairly Wade had been playing the game until roughly the last quarter of the story.

I had a few ideas and suspicions, but the picture remained in unclear until reaching the last quarter when nearly everything, almost automatically, began to click together to form a practically complete picture and only aspect remained hazy – revealing the only weak link in the plot. Wade should have told the reader (ROT13) nobhg gur oebxra fcbhg bs Ybeq Tenlyr'f grncbg. However, it's the only design flaw in what's otherwise a flawlessly plotted detective story that even Agatha Christie could not have improved upon. But the solution is not merely an answer to a complicated, if ultimately simple, puzzle because the characters are not merely chess pieces who stand and move in service of the plot. So the solution is both logical and emotionally destructive, which delivered the finishing blow to the murderer. A truly tragic ending!

No Friendly Drop has the outward appearance of a typically British, traditionally-structured country house mystery, but you only have to read the first chapter to understand this one is different and what unfolds in the succeeding chapters is an intelligently written and plotted detective story – particularly how Wade handled the plot-thread concerning the faked furniture. When it became evident what had happened at Tassart Hall, the story smartly began to shape into a human tragedy to deliver an ending befitting a classic. The fire that was lit in the 1920s was beginning to roar. Highly recommended!