Motohiro Katou's Q.E.D. vol. 15 comprises of the usual two novella-length stories with the opening story, entitled "Glass Room," presenting the reader with one of the series more conventional, but deviously plotted, stories which has everything from an impossible crime (of sorts) to a whole host of those pesky alibis – except "this locked room destroys alibis." The story takes place during the last week of December and, if my memory of the series timeline serves me correctly, it's the last week of 2001. 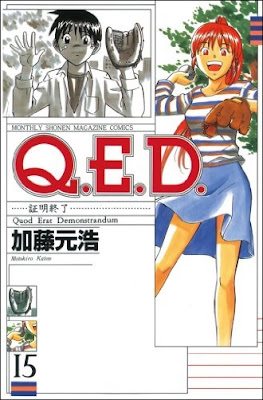 December is shiwasu in Japan and "shiwasu means a big cleanup day" to start the new year with a clean house and soul, which is why Sou Touma is helping Kana Mizuhara cleaning out her house. Mizuhara comes across a CD she borrowed six months ago from a classmate, Oya Natsumi, but she forgot to give it back. Touma reminds her it's the time of year to return all the stuff you have borrowed, but, when they arrive at the home of their classmate, Inspector Mizuhara is there with the family. Not without reason. Natsumi tells them her grandfather has been murdered!

Oya Etsuro was a man of leisure and an audiophile who dedicated all of his attention and resources to his hobby. Etsuro has his own workshop where he builds his own, old-fashioned amplifiers with vacuum tube bulbs, which produce better sound, but "the number of usable vacuum tube bulbs is decreasing" and "a rare vacuum tube can cost more than 100,000 yen" – ensuring the hobby is an expensive one. Etsuro is found one day in his workshop with a knife plunged into his side and he had three visitors that day, but they all possess unassailable alibis. Etsuro's struggling daughter-in-law, Oya Toyoko, made her weekly visit to bring him a bunto lunchbox. Wakabayashi Yoshikatsu is the president of the Health Foods Marketing Company and came to give Etsuro (who's an investor) a management report. Yamauchi Isao is fellow hobbyist and warned Etsuro that, "sooner or later," he's going to pay for living it up while his family were struggling with a recession. However, they were all seen leaving the premise by the housekeeper, Ogawa Shouko, who was knitting outside the workshop door when Etsuro was still alive. So who murdered this strange and selfish man and how?

The strength of this story is in its denouement as Sou Touma eliminates all of the suspects and every possible way the murderer could have entered, or exited, the workshop. Only to start all over again from scratch in order to demonstrate "there is a third entrance" that completely obliterates the murderer's otherwise unshakable alibi. Touma produces a one-of-a-kind piece of evidence the murderer unwittingly left behind in the flow of time. Punctuating his explanation with cracking the dead man's riddle promising "a present for someone that understands his hobby." A neatly done piece of visual code cracking that only works in a visual medium like comic books or TV.

So, plot-wise, "Glass Room" is a highlight of the series with the third, practically invisible entrance immediately inviting a comparison with Carter Dickson's The Judas Window (1938) and Arthur Porges' "The Unguarded Path" (collected in These Daisies Told, 2018), but putting the locked room mystery to work to craft a perfect alibi makes it closer to the stories in Tetsuya Ayukawa's The Red Locked Room (2020). Either way, it's a fantastic, neo-classical detective story.

The second story, "Dedekind Cut," brings the focus back on the series-characters as it explores another, unresolved episode from Touma's time as a 10-year-old prodigy at the Massachusetts Institute of Technology in America. At the time, Hilbert Dorn, Professor of Mathematics, had an extremely intelligent and arrogant assistant, John Toll. Professor Dorn and Toll never got along very well, but the professor was forced to terminate Toll's position when he caught him altering a paper on his computer, which is where the incident would have ended – only it appears Toll began to mentally torture the professor. Professor Dorn's constantly finds his office ransacked or items smashed to pieces. Even when the locks were changed, the incidents continued with everything locked up and no signs of forced entry. So the professor asks Touma to be his witness and give evidence in court of what John Toll has done to him, but Touma flat out refuses to do this. Saying that the whole problem is like "a Dedekind cut" (a mathematical "concept that rational and irrational numbers can be cut from a real number line").

Several years later, Professor Dorn travels with Syd "Loki" Green to Japan to ask Touma to finally explain why his problem is like the Dedekind cut. Yes, the story include pages that will give some readers traumatic flashbacks of their math homework, but you can be mathematically illiterate and still piece together the solution. A rather sad solution firmly grounded in the personalities of the characters (Dorn, Toll and Touma) with all the clues fairly on display. So a relatively minor entry in the series, but a good example of a compelling, character-driven detective story. 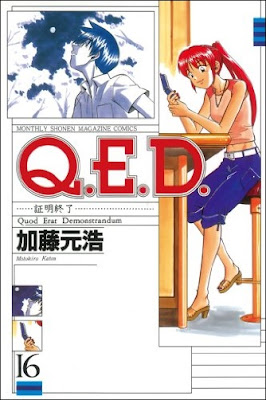 The 16th volume of Q.E.D. opens with "Sakura, Sakura" and takes place against the preparations of the Flower Viewing Festival in Sakisaka Park. Kana Mizuhara is the class manager in charge of the preparations, but a dark cloud drifts over the preparations when a third-year student, Minegishi, enters the classroom to ask Mizuhara is going out with Touma. Mizuhara vigorously denied it and learns Touma is unable to help her with preparing the flower viewing. Something involving his future and Minegishi. So another character-driven story exploring and fleshing out the two protagonists, but the story comes with three (locked room) mini-puzzles that need to be solved.

So, while in the park, Mizuhara meets three people from a nearby company, but they all have lost something that could potentially spell trouble for them. Two employees lost an important document in the copying room ("it just disappeared in front of our eyes"), which has a very easy and solvable answer. The third employee lost a wedding ring and provides the story with a second locked room-puzzle. Matsushima Shinsuke is kind of the office clown of the company and claimed to "have night vision even at night," which he did to trick his colleagues into making a losing bet. Shinsuke told them to write something on a piece of paper, put it inside a sealed envelope and he would read it in the windowless, pitch-black document room – which has the light switch on the outside. And he did it! A really fun little locked room-trick that becomes even better once you know how it was done, because the premise feels cheap in comparison with the solution.

However, these are merely mini-puzzles with the story really revolving around the undefined relationship between the two protagonists, particularly Touma, as it's implied "someone like that shouldn't be in our world forever" and how "he's definitely going to disappear one day" – like cherry blossoms "he'll fall at some point." So, on a whole, a good and evenly balanced story, but shows Q.E.D. is a series you have to read in order. By the way, the balancing act between the emotional and intellectual is a red thread running through all the characters and stories in this series.

Regrettably, the second and last story, entitled "A Corpse's Tear," ends this volume on a disappointing note, but the story began promising enough with Inspector Mizuhara taking his daughter and Touma on a fishing holiday in the mountains. They are staying with an old friend of the inspector, Ooshiro Yoshirou, who asks the policeman to look at a letter he received. A girl he knew from high school, Awata Ryouko, wrote him to say she fears her violent husband is going to kill her. Next thing they learn is that she's apparently ran away from her husband, but the search for a missing person eventually becomes a murder case and a hasty arrest is made. But did this person really do it? Touma has to answer that question by discovering the place where the body had been hidden before it was discovered. Admittedly, the trick was clever, but something the reader has not been prepared to deal with because it took so long for the body to be found. A seasoned mystery reader can probably make an educated guess where the body could have been hidden, but not really fair in already plain and unremarkable story. You have to expect these kind of duds in a series casting such a large, wide net in a variety of (back) waters of the genre. Some of those waters were previously unexplored.

So, all in all, volume 15 evidently is the stronger of the two volumes with a traditionally-styled, tightly plotted locked room problem and a very well handled and compelling piece of character-building, which is a trick the opening story of volume 16 tried to repeat. But the collection of mini-puzzles stole the show there. Unfortunately, the last story is as unimpressive as it was disappointing, but, on balance, they more than justified my long overdue return to Q.E.D. I'm going to try to double-review my way through the series in 2022 and try the first two volumes of C.M.B. To be continued...