"The most creative people have this childlike facility to play."
- John Cleese

Last Friday, Sergio from Tipping My Fedora posted a glowing review of He Who Whispers (1946), which came out on top of a John Dickson Carr poll that was held on his blog in late 2014 and the results were very interesting. 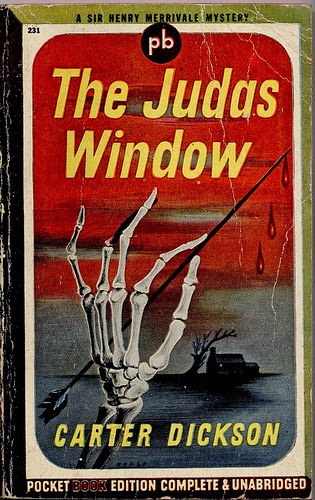 The internet has done its fair share in bringing about a Renaissance Era of Detective Fiction, giving (secondhand) book dealers and independent publishers an open market place, which made hoarding Golden Age mystery writers as easy as pulling a coin from a child's ear. Once popular writers that were relegated to obscurity are being discovered and appreciated again by a whole new crop of readers. John Dickson Carr is one of the mystery writers who benefited from this, as nearly all of his novels are easy to come by today, but this seems to have resulted in a reassessment of what readers consider to be Carr's best work – swapping The Hollow Man (1935), The Peacock Feather Murders (1937) and The Crooked Hinge (1938) for He Who Whispers, She Died a Lady (1943) and Till Death Do Us Part (1944).

Only The Judas Window (1938), published as if by "Carter Dickson," seems to be as popular as ever, which made me wonder: would the story stand up to re-reading? The short, easy answer is: yes. But that would make for a rather short review.

The Judas Window is, unusually for Carr, structured as a courtroom drama with the scowling, Churchillian figure of Sir Henry Merrivale acting for the defense at the Old Bailey in a murder trial. James "Jim" Caplon Answell stands accused of the murder of his future father-in-law, Mr. Avory Hume, who could've only been killed by Answell – despite a clear lack of motive. They were the only occupants of Hume's practically bare and hermitically sealed study. A solid, wooden oak door, bolted from the inside, fits tightly in its frame and the windows were latched and covered with steel, burglarproof shutters. The decanter of the doctored whiskey, which made Answell pass out, has been replaced and Hume lays sprawled on the ground – a trophy arrow wrenched from the wall protruding from his chest.

Nobody believes in Answell's innocence. Nobody, except for Merrivale, his unshakable believe in the "blinkin' awful cussedness of things in general" and knowledge of the existence of a Judas window. And with that, Carr did what he did best and spun something perfectly sinister around something innocuous and everyday as an unseen opening. 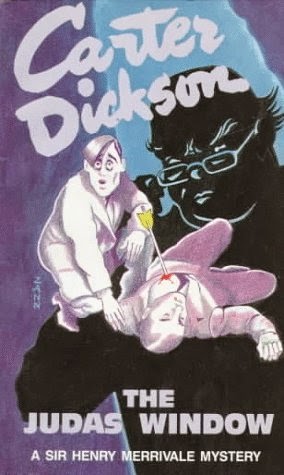 A Judas window is a window in a cell door to the see the prisoner, but H.M. points out there are more of them, "you've got a Judas window in your own room at home; there's one in this room, and there's one in every courtroom in the Old Bailey. The trouble is that so few people ever notice it," which is why H.M. so strenuously objected to the study being described as "sealed." H.M. assured that the door/windows were really "tight and solid and bolted" and "nobody monkeyed with a fastening to lock or unlock either," which was the same for the walls – bare of any crevices or rat-holes. A tough nut to crack and it's an impossible situation begging for a mind bending simple explanation, which (IMO) is a challenge that was met. It was simple and original, but without reducing the sinister aspect of the titular window. This alone will secure it as a favorite among locked room enthusiasts for many decades to come.

The other part that probably made this book an endearing to JDC fans is Merrivale's one-off appearance as a barrister, which was the first time in fifteen years and there was (of course!) some commotion the last time he appeared in court – addressing the jury indiscreetly with, "well, my fatheads." H.M. is prone to theatrics (e.g. The Gilded Man (1942) and The Skeleton in the Clock, 1948), but is more contained here and pounds the enigmatic facts of a perfectly sealed room that wasn't sealed, a missing piece of goose feather from an arrow, golf suits and inkpads, and compiling a "Time-Table for Archers" – while witnesses who were milling in-and around of the house take their seat in the witness boxes. Slowly, but surely, Merrivale peels away the many layers of confusion wrapped around Hume's murder and the Old Man's performance at the Old Bailey would've gotten the slow-clap from Perry Mason, John J. Malone and Francis Pettigrew after concluding the evidence for the defense with "Bah!"

If there's anything to be said against The Judas Window, it's that H.M. takes his sweet time to arrive at the final conclusion and that made it, at times, feel a tad bit padded. Alex Atkinson spoofed this wonderfully in "Chapter the Last: Merriman Explains," from Murder Impossible: An Extravaganza of Miraculous Murders, Fantastic Felonies and Incredible Criminals (1990), but I only mention this to proof I can be critical of Carr. The Judas Window stood more than up to re-reading.

Note for the curious: Chapter Fourteen, "Time-Table for Archers," mentions a locked room murder in tower looking out over the sea, but not the title of the story or the name of the writer. Well, it's one of the stories from Otto Penzler's The Black Lizard Big Book of Locked-Room Mysteries (2014). SPOILER: ["The Badmoor Murder" by Melville Davisson Post].
Geplaatst door TomCat on 2/13/2015