Ian Borthwick Greig is a now forgotten, obscure mystery writer, born in 1892 and died in 1959, whose name has been wrongly reported online as Ian Baxter Greig, but a little detective work revealed his correct name and the error is probably due to someone having misread the title of one of his novels – namely Baxter's Second Death (1932). You can see how someone could have read it as Second Death by Ian Baxter Greig with the middle name being in the wrong place. But this is not the only misunderstanding surrounding his identity. Some websites mixed him up with another Ian Greig, a Scottish conservative, who wrote The Assault on the West (1968), but he was born in 1924 and died in 1995. 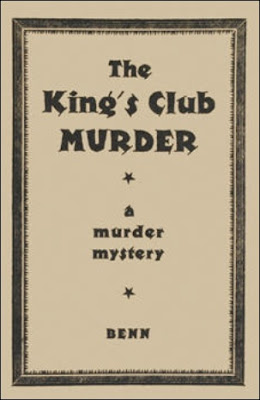 So, having all of that sorted out, I tried to track down what I could find about this long-forgotten mystery writer and pickings were regrettably slim. I found his name listed in Record of Service of Solicitors and Articled Clerks with His Majesty's Forces, 1914-1919 (1920), which noted Greig had "served as 2nd Lieut., 8th Batt. Duke of Cornwall's Light Infantry, subsequently promoted Capt." and was "mentioned in dispatches" as well as being "awarded the MC" (Military Cross). Greig then vanished from the records until he briefly reappeared in the early 1930s as the author of five now exceedingly rare, often expensive detective novels. None of the books have been reprinted since the thirties and images of the dust jackets are practically non existent online. However, the dust jacket of Greig's The Tragedy of the Chinese Mine (1930) is mentioned in a 2013 article, "The Library of Unborrowed Books," whose "title is spelled out in letters that are meant to seem assembled from stalks of bamboo."

Greig's work would have been next to impossible to sample had he not bowed out of the genre with the publication of The Inspector Swinton Omnibus (1934), which is the cheapest, most common title in the series and comprises of his first three novels – The King's Club Murder (1930), The Tragedy of the Chinese Mine and Murder in Lintercombe (1931). I recently stumbled across a slightly battered, dirt cheap copy of the omnibus edition and always welcome an opportunity to explore a completely forgotten mystery writers. See my more recent posts on John Hymers and B.J. Kleymens.

The King's Club Murder, published in the US as The Silver King Mystery, is Greig's first novel and introduced his series-character, Inspector John Swinton, which is apparently his most sought after novel by collectors of golfing/sports-themed mysteries. The first-half can be read as an origin story.

John Swinton was "young to be an inspector in the Criminal Investigation Department of Scotland Yard" and had not only "the initial advantage of a thoroughly good education" to thank him rapidly climbing the rank, but also "his ability to carry out the most dreary form of police drudgery" – almost with enthusiasm and without complaint. Like the "unenviable job of keeping the suicide register." Swinton still wonders "whether he would ever get his chance in a spectacular case" or "whether he was doomed for the rest of career to drug-smuggling and its allied trade," which is when the news arrives that there's been a murder at King's Club. Since two of the senior detectives are absent, Swinton is dispatched to the golf club to take charge.

King's Club is an exclusive, old-world institution near London and exclusive here means that "no amount of gold will unbar its gates," but one of its members, Miss Amelia Piltar, whose large house practically stood on the grounds of the club. Miss Piltar became a member and is often playing practice shots, where she's not supposed to, but nobody has the courage to tell the short-tempered, vaguely sinister old lady not to. And it was her body that was found in a clump of trees near the eighteenth fairway. Admittedly, the murder is a strange one! 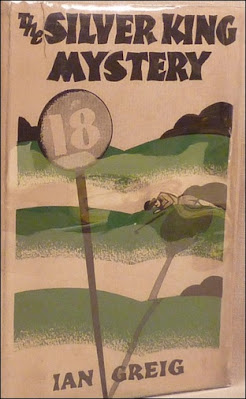 Miss Piltar had received two very severe blows to the back of the head, insufficient to have caused death, but the bizarre thing is that the doctor believes that the blows were "almost certainly due to a golf ball." After being knocked unconscious, she was strangled with some very rough material and apparently robbed. The case is guaranteed to become a cause celebre when Swinton discovers the victim had been blackmailing people left and right.

This first-half is easily the best part of The King's Club Murder as it shows a young and promising, but mostly inexperienced, police inspector handle his first murder case. And not everything goes perfect. Swinton forgets to check up on certain things or threatens to lose his temper with a suspect, but demonstrated some shrewd diplomatic skill when handling two notorious press hounds. Less professionally is Swinton falling "blindly and madly in love" with a strange woman who turns up again in the second-half and making a small fortune on stock market with an insider tip. But swearing "a vow never again to let money fever grip him again." Swinton also investigates an unusual structure on the club grounds, a polo-practice hut, which has a floor sloping up steeply to the walls on all four side leaving a small level patch in the center – occupied by "an extraordinary-looking hobby-horse." A piece of poorly discarded evidence is discovered in the polo hut, but it should have been used as the scene of the crime. Why not toss the blackmailing victim (hogtied?) over the saddle like a cowboy's bounty to mock her crimes? There's a good and original locked room-trick hiding somewhere in that polo hut.

More importantly, the first-half had focus with clues and a serious suspect to concentrate on, but, as the police case collapsed, so did the structure of the story and plot. The whole story rapidly changed from a not uninteresting, second-string whodunit into a lethargic, third-rate British pursuit thriller typical of the 1920s and '30s chasing around a criminal with a penchant for disguises. A chase involving a capitalist plot involving commies, police raids, a booby trapped car and a damsel in distress (tied to a gate, not a railroad track), but nothing particularly good or worth elaborating on. So the ending could not have been anything but a huge letdown.

Greig's The King's Club Murder started with a lot of promise and energy by presenting a very young and green policeman getting a big break to prove himself, which shaped up to be a fairly decent, second-string mystery novel. But everything (potentially) good had to take a backseat in order to do a badly dated, unoriginal chase thriller. You could almost feel the plunge in quality when the story shifted gears. So, needless to say, The Inspector Swinton Murder Omnibus is going on the shelf for the foreseeable future.

Note for the curious: there are quite a few references in the story to the First World War, but one, very brief, allusion towards the end stood out to me. Swinton comes across a wooden seat in a village street with on the back, scarcely distinguishable now, painted "for the use of wounded soldiers only." Eleven years had barely passed in 1930 since the Armistice was signed and time was already doing its withering work en route to the next Great War.