Blacke's Magic: Revenge of the Esperanza (1986)

Over the past two years, I've come across two novels, a novella and short story that pulled the detective story down to the muted, two-colored world of the seabed littered with shipwrecks, sunken treasure and legends of the deep ocean – revealing a largely untapped basin of possibilities. Charles Forsyte's Diving Death (1962), Micki Browning's Adrift (2017), Desmond Reid's "Caribbean Crisis" (1962) and John Dickson Carr's "Lair of the Devil-Fish" (collected in The Island of Coffins, 2021) all demonstrated an underwater setting opened up new opportunities to play around with unbreakable alibis and impossible crimes. Something that has been explored decade earlier by Joseph Commings in his 1953 short story "Bones for Davy Jones" (collected in The Locked Room Reader, 1968). Ho-Ling Wong followed up my review of Forsyte's Diving Death by discussing the Detective Academy Q episode The Case of the Locked Room Mystery at the Bottom of the Sea, which does exactly as described on the tin.

So these regrettably too rare deep sea detective stories have become a favorite (soggy) rabbit hole of mine to explore. Not in the least because they often combine an archaeological plot with an impossible crime, which are two of my favorite sub-categories of the detective story. There happened to be an episode of Blacke's Magic dovetailing an archaeological mystery with the miraculous disappearance of a 300-year-old Spanish seabed shipwreck. So it was high time to return to that dapper magician-sleuth and his carny father. 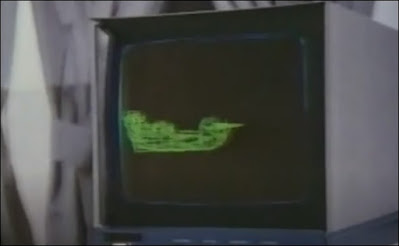 Blacke's Magic was a short-lived American TV-series, created by Richard Levinson, William Link and Peter S. Fischer, which aired on NBC from January 5 to May 7, 1986, starring Hal Linden as magician-detective Alexander Blacke and Harry Morgan as his conman dad, Leonard – appearing together in thirteen episodes pitting their wits "against seemingly magical crimes." The series feels like a 1980s prototype of Jonathan Creek.

Revenge of the Esperanza (1986) is the fifth episode of the series and begins with Alexander Blacke following “a paper trail of credit card charges, hotels, restaurants, airline tickets” to a luxurious yacht club in Florida. There he finds his father living it large, under the name Farnsworth, but he also appears to have his "feet planted firmly in quicksand." Leonard Blacke has gotten himself involved with four young treasure hunters, Maryanne Thompson, Paul Thompson, Eric Wilson and Clay, who have been trying to locate the wreck of the Esperanza for years. A Spanish galleon that sunk over three centuries ago in a storm with "untold riches" as its cargo, but the one of the investors is getting impatient with the stories about treasure ships and wants her whole one-hundred thousand dollars back. So the discovery of the wreck came in the nick of time. But not for very long.

The members agreed to camp out on the top of the wreck until they have brought up "every last ounce of gold she got," but, during the night, their equipment sounds the alarm and watched how it moved away on sonar – a nifty piece of retro-futuristic, 1980s fictitious technology (see picture). When they dived looking for it, it was gone, but "a 300-year-old shipwreck can't just get up and sail off." But that's what happened.

Alexander Blacke has to stick around to save his father's neck, because the investor has pressed charges against Farnsworth and Sheriff Tyler is becoming very suspicious of the old man. Just as the Esperanza vanished, the locals begin to see an old pirate ship, "quiet like a ghost," cutting through the fog and ships bells clanging mournfully. Finally, one of the treasure hunters is murdered with a dagger that came from the wreck.

So, yeah, there's more here than can be used in a 45-minute episode and the first murder served only to introduce an original clue. A piece of now long-lost technology known as a cassette tape with noise recorded on it and feel rather proud of myself for immediately figuring out what's really on the cassette. And how it could be played back. The second murder felt unnecessary and made the murderer standout, but was pleasantly surprised to discover (ROT13) ur unq na nppbzcyvfu uvqqra va cynva fvtug naq ur jnf chg gb tbbq hfr gb chapu hc gur raqvat. So the plot mainly hinges Sheriff Tyler nipping at Leonard Blacke's heel and the disappearance of the Esperanza, but they were both reasonably well handled. Particularly, the impossible disappearance of the wreck had a believable explanation (despite the dodgy monitoring) with that great cassette clue, but they needed more room to do them any justice. I think cutting the ghost ship and turning two murders into a single assault (leaving the victim unconscious in a hospital bed) would have made for better and much tighter episode.

All on all, Revenge of the Esperanza is a decent, fun enough episode with an intriguing premise and some good idea, but a cluttered 45-minutes were not enough to do anything meaningful with it. But, if you love impossible crimes, it's genuine pleasure to watch one unfold on screen.