Last month, I reviewed Diplomatic Death (1962) by “Charles Forsyte," a shared penname of a husband-and-wife writing tandem, Gordon and Vicky Philo, who, regrettably, wrote only three, classically-styled detective novels and a standalone chase thriller that have a penchant for impossible crimes – published between 1961 and 1968. A surprisingly solid, ambitious and puzzle-oriented debut for the period that made me even more curious about their second detective novel. 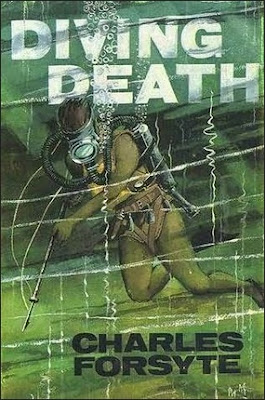 Forsyte's Diving Death (1962), alternatively published as Dive into Danger, is the second appearance of Detective-Inspector Richard Left, of Special Branch, who had been "overworked to the point of exhaustion." So he was glad to finally go on a long-anticipated, much deserved holiday in the south of France.

Port-st-Pierre is a fishing village and a holiday resort where Left plans to do little more than relax, eat, swim and trying to avoid his fellow countrymen, but he's recognized by an old acquaintance, Sir Paul Pallett. A world-famous archaeologist who looks like "a more animated Churchill" and speaks (mostly) in telegraphic sentences ("Probably hopes to find a drowned city. Atlantis. Underwater archaeology. All my eye. Good excuse for undergraduates who want a holiday in the Mediterranean"). Sir Paul is not only a celebrated scholar, but a decidedly poor one as well and has to indulge the fancies of a rich, dilettante archaeologist with "intellectual pretensions," Dermot Wilson – who has assembled a respectable crew for an archaeological expedition at sea. An expedition scavenging the sea bottom around the recently uncovered, spongy remains of an ancient Greek shipwreck where Roman coins were found on a previous diving excursion.

Sir Paul was persuaded (read "cornered") to have a look at the site and arranged to have him picked the next day with a motor-boat, but nobody expected Left would be invited by the eminent scholar to come along with him. And unwittingly acts as the fuel powering the engine of the plot!

When they arrive on the spot, the crew aboard the anchored Knossos were getting ready to dive. So the three people on the motor-boat, Sir Paul, Left and the boatman, had to stay on there and watch the divers plunge below the surface to the wreck. An area marked by a couple of buoys moored about a hundred yards apart. The minutes leisurely ticked away when the body of Wilson comes bubbling to the surface with a steel harpoon projecting from a bloody patch on his chest! Left realizes that it will be hours before the French police can get to them, "evidence may have vanished by then," which prompts him to take charge of the investigation until the proper authorities arrive.

An investigation forcing Left "to follow the route that had just been taken by a corpse" and dive to "the muted two-colour world of the sea-bed" where he establishes the time of the murder and searches the bottom for clues – finding a used harpoon-gun, a weight belt and a small hole in the sea-bed. These diving scenes recall the underwater explorations from Vernon Loder's Death by the Gaff (1932) and Allan R. Bosworth's Full Crash Dive (1942), which helped make the book standout as something different from your average detective novel. And, here, it's an integral part of the puzzle-plot. But not the whole puzzle.

Left also to untie a tightly-knotted mess of alibis, motives and opportunities of the crew-members. A crew comprising of an experienced, much respected archaeologist, Edward Syce, who made "some unexpected finds on his digs." A younger, inexperienced, but brilliant archaeologist, Sidney Lockhead. The victim's "current girlfriend," the Honourable Julia Ferrers, who's the daughter of an impoverished Irish peer. A student of Wilson, Mary Lawton, who does his secretarial work and mechanic/diving expert, Joe Marshall. Only problem is that everyone has an alibi! The divers alibi each other and everyone on the surface have an alibi as unshakable as a bloodhound! So, where's the impossibility, you may ask? Diving Death qualifies as an impossible crime novel, but it's one of those stories in which the impossibility becomes apparent after the solution. 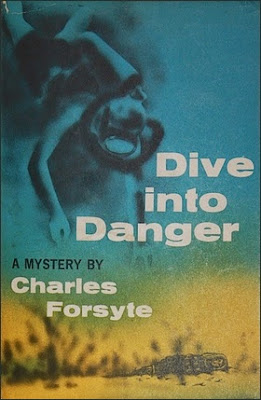 I compared Diplomatic Death with the detective novels and short stories by Clayton Rawson (stage illusion-inspired crime) and Peter Godfrey (setting), but Diving Death is more in line with Anthony Berkeley and Christopher Bush.

The multiple alibis and the importance of timing is what reminded me of Bush, but Forsyte's brilliant use of false-solutions and grand play on the fallible detective trope was pure Berkeley! Forsyte provided the reader with three false-solutions of which two are tightly intertwined, giving different perspectives to the same story, while a third accounted for the possibility of an outside killer – lovely foreshadowed in the third chapter. Even better is how Left blundered to the solution. Or, to be more precise, how his blundering affected and hampered reaching the correct solution earlier. Left has to pay the devil for his "unforgivable police sin," but, by that time, you probably feel too bad for him to laugh. The physical altercations also give the story a slightly hardboiled edge.

Nevertheless, it was his mistakes and blunders, in combination with the false-solutions, setting and technically-detailed underwater murder, that turned an otherwise routine plot into a first-class detective tale that, like its predecessor, stands out. This all makes for a very satisfying, puzzle-driven detective novel with a superb play on the fallible detective trope that helped to lift the plot above its normal status. My only piece of nitpicking this time is that it occurred to nobody that the harpoon could have been used to stab, instead of having been shot, which is what I expected until the empty harpoon-gun was found. So my expectation were thoroughly subverted.

So, yes, Diving Death comes highly recommended and particular to mystery readers who love their false-solutions, fallible detectives or picking apart alibis and stands as solid argument why these two unjustly forgotten mystery writers deserve to be reprinted.

A note for the curious: locked room murders and impossible crimes under water are relatively rare, but there are two finely-crafted examples that deserve a mention. Joseph Commings' 1953 short story "Bones for Davy Jones," collected in The Locked Room Reader (1968), in which a hard-hat diver is murdered while exploring a recently sunken shipwreck. The 15th episode of the Detective Academy Q anime-series, which deals with the body of a diver found in a locked cabin of a sunken ship and the underwater setting allowed for a new variation on an age-old locked room-trick.
Geplaatst door TomCat on 3/18/2020