Gordon Philo was a British diplomat and magic aficionado with a background in the secret intelligence services who, reportedly, was "instrumental in the processing and circulation of the material revealed by Russian double agent Oleg Penkovsky," which revealed the presence of Russian missiles in Cuba – a move that prevented "a catastrophic third World War." More importantly, Philo co-authored a handful of classically-styled detective novels with his wife, Vicky Galsworthy Philo.

Diplomatic Death (1961) was the first novel to be published under their shared pseudonym, "Charles Forsyte," but the introduction revealed that the period between the first draft and publication was a long, arduous journey. 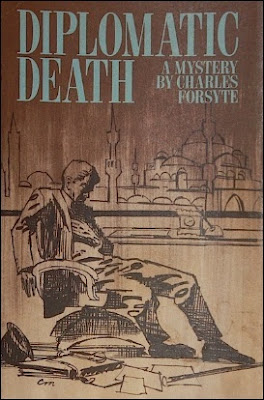 During the 1950s, Philo worked at the British Consulate-General in Istanbul, Turkey, where whiled away the winter evenings reading detective stories and decided to would be more entertaining "to write one myself." So he began to work on a plot and had drafted several chapters, but abandoned the fledgling manuscript when his wife returned to Istanbul. Some years later, the manuscript was "resurrected from a drawer," completed and they entered it in a competition, but the judges commented that the ending, while original, was wrong – back "the manuscript went into the drawer." Very likely, the drawer is where the manuscript would have stayed had it not been for a chance meeting with a member of the Detection Club.

Vicky was standing at a bus stop in Maida Vale, London, when "a passing taxi was hailed by another lady in the queue" who "asked if anyone else would like to share it with her." Vicky accepted the offer and discovered that her companion was "the well-known mystery writer," Christianna Brand!

When Brand heard Vicky had co-written an unpublished mystery novel, she advised her to contact her literary agent, but the agent returned exactly the same answer as the judges. So they re-wrote the whole book, which was finally accepted and published in Britain and the United States. A great "prologue" to a wonderful detective story that even challenges the reader to spot "the original ending." I think I may have spotted the original solution and agree with the experts that it would been the wrong kind of solution for the story, but ditching it robbed the story of a murderer with an iron-clad alibi dipped in solid concrete. However, it was a necessary sacrifice.

Diplomatic Death begins with the arrival of Inspector Richard Left, of Special Branch, in Turkey on a quasi-secretive mission concerning a murder and disappearance at the British Consulate in Istanbul.

They combed through the garden, searched the vehicles in the courtyard and turned the whole building inside out, which even turned up "an endless grimy brick tunnel" between floors nobody knew existed, but without any result. So they decided to lock the office and sealed the door in two places with sealing wax, stamped with signet rings, until "a proper investigation can take place." Diplomatic Death has an entry in Robert Adey's Locked Room Murders (1991), but the impossibility listed is the closing of a safe-door and the presence of an item in the office at the time it had been securely locked and sealed. And not the quasi-impossible disappearance of the body. However, these aspects of the case are never treated as actual impossibilities, but as smaller pieces of a bigger puzzle and my advise is not to the read book solely for its locked room elements. 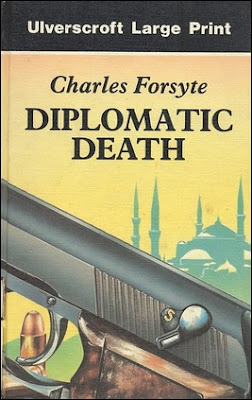 A knotted, tangled headache of a case that Left is tasked with unsnarling and you can't help but sympathize with the long-suffering, underdog policeman who's frustrated in every way imaginable, which began with "the purgatory" of a long, uncomfortable plane ride to Turkey and continued even at his hotel. A dirty, rundown place where noisy cabaret artists returned at all hours of the night and the shattering sound of the aged, under-lubricated laboring of the automatic pump of the large cistern on the roof filled Left's hotel room – keeping him awake until the early hours of the morning. And then there are all the dead-ends, red herrings and lack of tangible evidence.

Nevertheless, you should not assume Left is one of those modern, bungling detectives who accidentally stumbles to the correct solution by sheer luck. Left constructs a clever and logical false-solution based on an office chair, a sound recording, a key and a limb arm. This false-solution cracked, what could have been, a cast-iron alibi like an eggshell! A perfect use of the false-solution.

John Norris, of Pretty Sinister Books, wrote in a 2014 blog-post, "The Detective Novels of Charles Forsyte," that when Diplomatic Death was first published Forsyte was compared to Agatha Christie and Ellery Queen, but John thought "a more apt comparison would be Clayton Rawson" whose "impossible crime mysteries are inspired by stage illusionist's bag of tricks." Something you can definitely see reflected in the both the false and correct solution in this novel, but the plot, setting and the detective also reminded me of the impossible crime stories of Peter Godfrey. I wonder if Godfrey's Death Under the Table (1954) is one of the books Philo had been reading during the mid-1950s. I know Death Under the Table wasn't widely circulated outside South Africa and is somewhat of a rarity, but therefore not unlikely to turn up in the library of the British Consulate in Turkey. Diplomats who read detective stories would have easier access at the books not published in the Britain or the United States.

I was able to work out the correct solution based on exactly the same clues that Left used to get there, but this takes nothing away from how clever and fairly the whole plot was handled. A plot that could have been disappointing, or unconvincing, were it not for the excellent way in which setting was utilized, which created the time and space needed to make the trick work. A setting not merely limited to the British Consulate, but ventures out into the then still young Turkish republic of Atatürk where the ancient and modern world came together on the streets of Istanbul. The dual setting of the British Consulate and Istanbul where absolutely instrumental in making both the plot work and give the story a distinct personality of its own, which would have even made the story standout had it been published two or three decades earlier.

Sadly, this means you can count Forsyte, like Kip Chase and John Sladek, among the Lost Generation of Golden Age-style mystery writers who had the misfortune to arrive on the scene too late to be fully appreciated. What's even sadder is that their work is now perhaps a little too recent to be revived in our current Renaissance Age.

So, on a whole, Diplomatic Death is not only a very well-written, fairly clued mystery novel with a plot hearkening back to the golden days of the detective story, but a strong debut without any of the real flaws often found in such works. A highly recommendable first that has made me even more curious about the other Forsyte novels listed in Locked Room Murders and in particular Dive into Danger (1962), which apparently deals with the impossible (underwater) murder of a treasure hunter and a circle of suspects comprising of marine archaeologists. How can anyone resist such a premise?