Back in December, John Pugmire, of Locked Room International, published the long-awaited Locked Room Murders: Supplement (2019), edited by Brian Skupin, adding over 1150 short stories, novels, TV episodes, movies and anime/manga to Robert Adey's own revised edition, Locked Room Murders (1991) – which enlarged the original 1979 publication with 801 titles! I've burrowed my way through this new edition, like a miner with gold fever, but was surprised at how many titles had been overlooked. So a third, revised and expanded version would be a nice supplement to this edition. ;) 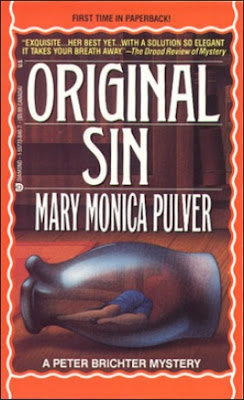 Even so, the 2019 supplement succeeded in bloating my impossible crime wishlist to the point that I started calling it Dr. Gideon Fell. Skupin underlined some fascinating-sounding stories in his preface.

One recommendation that stood out was listed under "post-1991 stories and the Renaissance," Original Sin (1991) by Mary Monica Pulver, which was spotlighted for its "considerably surprising solution." An ultimately simple explanation that "casts the entire tale in a new light" and Skupin recommended the book to those "who haven't found a locked room mystery they like." Color me intrigued!

Mary Monica Pulver is an American novelist, lecturer and educator who wrote a handful of mystery novels under own name, but Pulver penned nineteen cozy mysteries as "Monica Ferris" and co-authored a series of historical detective novels with Gail Frazer – published as by "Margaret Frazer." One of their collaborative short stories, "The Traveller's Tale," was anthologized in Mike Ashley's The Mammoth Book of Locked Room Mysteries and Impossible Crimes (2000). Original Sin is one of her contemporary novels, but the distant past is so finely ingrained into the plot that I decided to tag the review as a historical mystery. You can almost say that the story and plot are channeling and interacting with the spirits from the Golden Age!

Original Sin is the fourth title in the Peter and Kori Brichter series, commencing with the equally intriguing-sounding Murder at the War: A Modern-Day Mystery with a Medieval Setting (1987), but here we have a truly clever, deeply satisfying homage to the snowbound country house mysteries of yore.

Peter, Kori and their newborn son, Gordon "Jeep" Peter, planned a "Christmas among friends" at Kori's ancestral home, Tretower Ranch, situated just outside of Denver, Colorado. A merciless blizzard already stranded two of their friends in Denver and is going to cause more problems for them in the days ahead, but the people who made is their oldest friend, Gordon. An ex-policeman and former colleague of Peter, Frank Ryder, who remarried his ex-wife, Mary, upon retiring, but the blizzard forced them to postpone their honeymoon and stay with the Brichters. There's a maid/nanny for the baby, Jill, and Kori's groom/stable hand, Danny Bannister. Lastly, there's the elderly, long-lost and last-living relative of Kori, Evelyn McKay Biggins.

Ever since Kori became a mother, she has been rooting around her family tree and the murky, fragmented history of the house and found there was a "living link" left to her ancestral home, Evelyn, but she had been warned about poking around in its history – because "there's sour apples on many a branch of the family tree." First sign of trouble is Mary indigently refusing "to sit down and be pleasant to Evelyn McKay" and tells Frank to start packing their bags, but the blizzard prevents them from leaving. So they decide to keep the peace by keeping them separated as much as possible. Fortunately, this gives Kori an opportunity to take Evelyn aside to ask her about the history of the house. 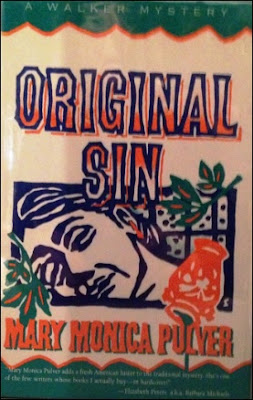 Original Sin is as much a genealogical detective story as it's a country house mystery with the ties of blood and history being central to the plot.

The gathering goes from slightly strained to an unmitigated disaster when the power lines go down in the snowstorm and plunges the house in darkness, which is only partially relighted by a backup generator. All other rooms, "including the library," remained in darkness. The library is where they found the body of Evelyn Biggins with the top of her skull resembling "a smashed egg." Someone had murdered the elderly woman, but the isolating blizzard ruled out an outsider. And that means the murderer has to be someone in the house!

A seemingly classic premise, but not entirely, as this is a family home filled with normal, likable people who genuinely care for each other and the victim, practically stranger, is an outsider – whose murder places the specter of suspicion among friends. This makes me suspect Pulver may have read and admired Christianna Brand (c.f. London Particular, 1952). Although the characterization here is not of the same caliber nor does Pulver take the story to the same dramatic conclusion, but the plot is technically sound and meets the gold standard of a 1930s detective novel. So what about that surprise solution and locked room-angle of the murder?

Skupin described the impossibility in Original Sin as "death by powerful blunt instrument of a woman on her own in a library" with "no weapon strong enough to have smashed her skull found." The way in which Evelyn was murdered is elegantly executed how-dun-it that found a new application for an old, time-worn idea, but not an impossible crime. There are, however, two (underplayed) impossibilities that are difficult to describe without giving anything away, but I'll give it a shot.

As they poke around in the distant past, Peter and Kori track an unlikely trail to a long-held, well hidden secret. Physical evidence tells them the circumstances of the secret were known only to Evelyn, which raises the question how something could have been repeated sixty years later when only the victim was privy to the details. A second (minor) impossibility, linked to this long-hidden secret, concerns a [redacted] that appears to have broken "a long time ago" and [redacted] only recently, which left behind "a freshly-broken trail of dust" – giving the impression [redacted] was in suspended animation for decades. You got that right. These are time-locked mysteries! An original and novel impossible crime idea that deserved more consideration than it received it here.

All the same, Pulver created a beautiful and logical synergy between the past and present-day plot-strands, which are inextricably linked and adhere to the laws of cause-and-effect. Even when separated by the better part of a century! I pieced together the whole puzzle well before the end, but the quality of this good, old-fashioned piece of craftsmanship made it impossible to be left disappointing. An immensely satisfying ending! So I echo Skupin's recommendation of Original Sin as not only a standout locked room title from the 1990s, but also as a surprisingly serious and respectful treatment of the traditional, snowbound country house mystery. And the dark, snowy Christmastime setting makes it a perfect addition to everyone's 2020 holiday-themed reading lists.