The Nameless Detective: "The Hills of Homicide" (1949) by Louis L'Amour

Louis L'Amour was a consummate story-teller with close to a hundred novels and numerous short story collections to his name, primarily tales of the frontier, whose work was honored with the Congressional Gold Medal and the Presidential Medal of Freedom – making him the only novelist in American history to receive both medals. During the 1940s and 50s, L'Amour contributed short pieces of hardboiled crime-fiction to such pulp magazines as Black Mask, Popular Detective and Thrilling Detective. One of his detective stories is of the impossible variety! 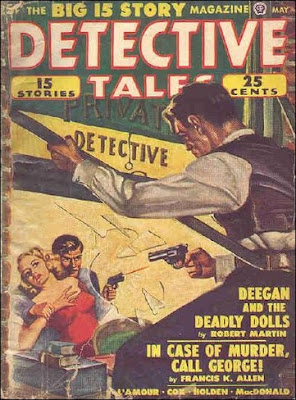 "The Hills of Homicide" was originally published in the May, 1949, issue of Detective Tales and was listed by Robert Adey in Locked Room Murders (1991) with an unusual lengthy comment tacked to it.

Adey described "The Hills of Homicide" as an "interesting and worthwhile story," but added that the publishing history of the eponymous short story collection, The Hills of Homicide (1983), is even more interesting. Apparently, there was an unauthorized edition with fewer stories published by Carroll & Graf, which actually preceded the complete, fully authorized Bantam edition! Adey's comment on the collection's back-story drew my attention to the fact that an "unnamed private eye" is the detective in this hardboiled, Western-tinged impossible crime tale. A literary ancestor of Bill Pronzini's Nameless Detective and John Quincannon? Let's find out!

"The Hills of Homicide" opens with the arrival of a private-detective from Los Angeles in a small, out-of-the-way mining town, Ranagat, which lay in "the cupped hand of the hills like a cluster of black seeds," where the other night Jack Bitner was murdered at his cliff-top home – a "cantankerous old cuss" who owned the Bitner Gold Mine. Sheriff Jerry Loftus only has three suspects to consider. The victim's niece and sole heir, Karen Bitner. A tough-guy gambler and an alumnus of "the Chicago underworld of the late Capone era," Blacky Caronna, who had a dispute with Old Bitner. Caronna had visited him on the night of the murder. Lastly, there's Johnny Holben, "a suspicious old coot," who had been at daggers drawn with the victim. Only reason why the sheriff focuses on these three suspects is the scene of the crime.

A three-room stone house was built on the edge of a cliff and "the wall of sheer, burnt-red sandstone looked impossible to climb." So the only way to get to the top is a narrow trail going through a cut in the rock. At a wide spot in the cut, Holben had built his cabin to annoy to Bitner and "nobody could ever get up that trail without being seen." This makes it appear to be a who-of-the-three type of detective story.

Caronna hired a big city detective to find evidence exonerating him of any suspicion and his proclamation of innocence is oddly compelling ("I ain't had a hand in a killin' in—in years"). So our nameless detective tackles the case in the typical, hardboiled manner and, more than once, has to use his fists to get out of a tight corner, but they were some of the best fistfights ever seen inside the squared circle of a pulp magazine and this should not come as a surprise – considering L'Amour competed as a professional boxer. However, the highlight of the story was the solution to the impossible murder. A solution I detested on first sight, a weird menace-type of explanation, but quickly grew incredibly fond of it.

Yes, "The Hills of Homicide" turned out to be an actual locked room mystery, of sorts, in spite of the foundation for such a story looking as leaky as the haul of the Titanic. One of the suspects found another way to reach the house, qualifying it as an impossible crime story, but the bizarre solution struck me as preposterous. Something only a pulp writer would dare to offer as a solution. However, the nameless detective mentioned that this method is used in some parts of the world by criminals "to gain access to locked houses." So looked around the web and what do you know? Apparently, this method was even used on the battlefield with a notable example dating back to the 17th century (historical spoiler, click at your own risk). This made me do 180 on my initial reaction to the solution.

"The Hills of Homicide" is a cracking example of the more plot-driven, hardboiled locked room mysteries with a plot that has time to spare to settle a score in the "best scrap" the town has ever witnessed. Quality pulp! And highly recommended!

A note for the curious: the story briefly mentions miners are smuggling small amounts of gold ore out of the mine, which should be practically impossible to do, because Sheriff Loftus explains they have "a change room where the miners take off their diggin' clothes" and "walk naked for their shower" – coming out on "the other side for their street clothes." But they always find a way to get out with some gold. Obviously, a solution is never given for this quasi-impossible crime, but I gave it some thought and came up with a more dignified way to smuggle the gold pass the change-and shower rooms. All a smuggler has to do is grow a decently sized beard and use it to tie a small, oilskin pouch under his chin that will be hidden from view by the rest of the beard. A miner's curtain!
Geplaatst door TomCat on 2/19/2020