The Three Tiers of Fantasy (1947) by Norman Berrow

Norman Berrow was, like Fergus Hume and Arthur W. Upfield, a British-born Antipodean mystery novelist whose parents settled down in Ngaio Marsh's hometown, Christchurch, New Zealand, where he became one of the country's foremost craftsman of the locked room mystery – only Max Afford nipped close at his heels. You can find an entire page worth filled with alluring descriptions of Berrow's original-sounding impossible crime fiction in Robert Adey's Locked Room Murders (1991). 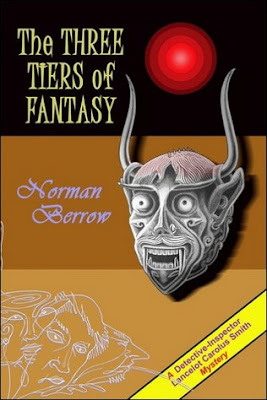 The Bishop's Sword (1948) has no less than three impossible appearances and disappearances, which includes astral-projection and the theft of a sword from a hermetically sealed cabinet. A giant, disembodied thumb crushes a man to death in The Spaniard's Thumb (1949) and Don't Jump, Mr. Boland! (1954) has a body inexplicably vanishing from the bottom of a steep cliff, but my sole exposure to Berrow had been his ambitious take on the 1855 Devil's Hoof-marks of Devon, The Footprints of Satan (1950). An impossible crime novel that turned the footprints-in-the-snow gimmick into a wintry obstacle course.

So what has kept me from exploring Berrow's work further? Honestly, I've no idea. Somehow, Berrow simply slipped through the cracks, but my fellow blogger and locked room fanboy, "JJ" of The Invisible Event, has been praising his work for years and served as a reminder to, one of the days, return to Berrow – which brings us to the subject of today's review. Another one of Berrow's detective novels listed in Locked Room Murders with several fantastic-sounding impossibilities.

The Three Tiers of Fantasy (1947) is the first title in the Detective-Inspector Lancelot Carolus Smith series and has a plot comprising of three isolated, seemingly unconnected disappearance cases defying the laws of space and time.

Winchingham is "a pleasant, peaceful spot" with "an old-world, unhurried atmosphere" populated by "industrious, unassuming and law-abiding" people. A small, quiet town with "no vices," but the Winchingham became the stage of "a triple mystery" that disturbed "the cosmic calm of esoteric circles" in Great Britain and was eventually solved by "a prosaic police officer." An eerie, fantastic case of The Man Who Had No Existence, the Phantom Room and The Stolen Street!

The first fantastic tier begins with a woman, Miss Janet Soames, who lives with her "selfish, domineering old humbug" of a brother and golf was her only escape from the house. Miss Soames was on the verge of becoming a middle-aged spinster when, one day, out of nowhere, Prince Charming appears.

Philip Strong claims to have been in love with her for a long time and they begin each other, in secret, until they decide to elope under the cover of night. Philip brings her to the house of an old friend, Jimmy Melrose, who has become an ardent spiritualist in his old age and even his very own séance room, but Janet has an eerie, unsettling feeling before entering the house – like "a forerunner of the nightmare" that was about to engulf her. Janet witnesses how Philip cheerfully mounting a staircase and waited for the top board to utter its "protesting creak," but she only caught a very deep sigh and, just like that, Philip ceased to exist. Not only had he had vanished, like a popped soap bubble, but everyone denied he was ever there! A cabdriver and Mr. Melrose's butler, Porter, swear up and down Janet had arrived at the house alone. And the Philip Strong they knew had been dead for the past seven years! 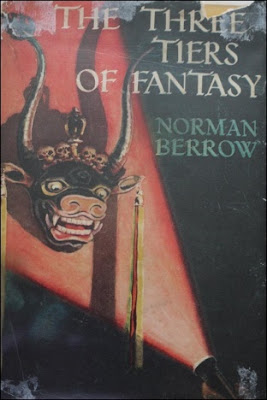 The "invisible companion" had been brilliantly used by John Dickson Carr in his well-known radio-play, "Cabin B-13," which later received a highly original treatment at the hands of Edward D. Hoch with "The Problem of the Leather Man" (collected in All But Impossible: The Impossible Files of Dr. Sam Hawthorne, 2017), but the solution was underwhelming and the premise clumsily handled. Giving too much away about the overarching scheme to the suspicious-minded armchair detective. There is, however, still so much to come!

In the Second Tier, the reader is introduced to an astute businessman and embezzler, Sherman Stokes, who's in the process of absconding with a modest fortune. But he's interrupted by his private-secretary, Miss Lana Booth. She knows what he has been up to and want to share in the spoils, which comes with an offer to become his "wife" and already has made arrangements. So without much of choice, Stokes agrees and they set-off for South America, but their car breaks down in Winchingham and are forced to stay the night at a haunted roadhouse, The Welcome Inn – which was once the property of an eccentric recluse whose hobby was dabbling in mysticism. Since he died at the turn of the century, the place has been haunted by a mischievous entity that has steadily chased away paying customers. So the place is closing down the following day. Stokes and Miss Booth can only get a room with no service, but what a room!

An old-looking, but royally furnished room, with a fireplace, french-windows, tapestry and huge, Queen-like bed with red, gold-flecked bedspread and "a Tibetan devil-mask" hanging on the wall – located on the second-floor. Only problem is that there's no such room at the inn. The place doesn't even have a second-floor! The phantom room has disappeared together with a valise full of embezzled money!

This second impossibility of a phantom room and a non-existent, second-floor is easily the best of the three with a more carefully handled presentation and a satisfying solution, which is not entirely original at its core. But the idea was very well executed. Coincidentally, the earlier mentioned Hoch collection, All But Impossible, has a short story, entitled "The Problem of the Phantom Parlor," working with the same idea and plot-elements. So did Hoch read The Three Tiers of Fantasy and thought he could improve on the first two impossibilities, because I can see how he saw possibilities for alternative, more original, solutions in the answers to the tier one and two.

Funnily enough, you can find a third story in All But Impossible, "The Problem of the Missing Roadhouse," which has an impossible disappearance that's a mixture of tier two and three. But not nearly as good as the other two stories or this novel. 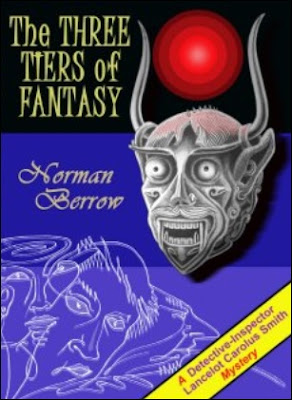 The third and final tier is a direct ancestor of Paul Halter's La ruelle fantôme (The Phantom Passage, 2005) with an alleyway, haunted by visions of the long-ago past, which has recently began to disappear and reappear again. Mrs. Josephine Prattley has decided to spend the weekend at the house of a local artist, Darcy Cherrington, but, when they arrive at his home, he tells Mrs. Prattley to wait outside as he puts the car away and simply vanishes without a sound – prompting her to enter the garage. She walks straight into "an medieval drinking den" with "medieval-looking people," speaking Shakespearean English, where she sees two of those people being put to the sword. A horrendous crime that took place there in 1597! Mrs. Prattley flies the scene, but, when she returns with a policeman in tow, the whole passageway has vanished. Only to reappear a short while later!

The problem of the stolen street is, sadly, the least impressive, or imaginative, of the three miraculous vanishings and even Detective-Inspector Smith admits the explanation is "disappointingly simple." But, in the defense of the author, there's only so much you can do to make a street disappear and the solution provided an entirely new answer to the problem. So there's that.

Detective-Inspector Smith makes short appearances in each tier to discuss and comment on these fantastic problems, but finally stirs to life in the fourth act, "The Toppling of the Tiers," in which he methodically reconstructs and demolishes the supernatural events that have plagued Winchingham. And there were more than those three apparently supernatural disappearances. The locked séance room of Mr. Melrose is ransacked by an evil, otherworldly, entity and a road barricade proved to have an illusory quality. Framed pictures were flying off the wall and a lift was operated by invisible hands at the inn. A man who left no fingerprints and a hat and coat go missing without anyone having been near them before they disappeared.

One by one, Smith strips them of their unearthly quality to reveal "the underlying sordid, mercenary motive" and, as an impossible crime, fanboy it was joy to read these chapters. You can figure out pretty much everything before you get to these explanatory chapters, but loved how these plot-strands were intertwined and knotted together at the end. Some other, non-impossible aspects of the solution were a bit cliché, but, honestly, I have never seen them put to better use than here.

The Three Tiers of Fantasy has a plot brimming with ghostly activities, supernatural occurrences and inexplicable disappearances, which makes it tempting to draw a comparison with Hake Talbot's Rim of the Pit (1944), but story was not packed a dark, doom-laden atmosphere – more in the spirit of a spirited, pulp-style caper (c.f. Hilary St. George Saunders' The Sleeping Bacchus, 1951). Or perhaps a better comparison would be some of the later "Carter Dickson" titles in which Carr experimented with murderless detective novels about impossible disappearances, such as Lord of the Sorcerers (1945) and A Graveyard to Let (1949), but written with the vigor of Herbert Brean (e.g. Hardly a Man is Now Alive, 1950).

So, to cut a long, rambling review short, The Three Tiers of Fantasy only failed to tax the brains of the armchair detective, but, in every other aspect, it was a thoroughly entertaining mystery caper crammed with impossible situations and locked room puzzles! Highly recommended, if your taste runs in that direction.
Geplaatst door TomCat on 2/16/2020