Herbert Brean was an American journalist, editor and writer, who wrote the widely acclaimed How to Stop Smoking (1951) and edited The Mystery Writer's Handbook (1956), but the bulk of his work comprises of seven detective novels and ten short stories – published in such magazines as Thrilling Detective and Ellery Queen's Mystery Magazine. These short stories include the elusive impossible crime tales "The Man Who Talked with Spirits" (1951) and "Nine Hours Late On the Opening Run" (1954). 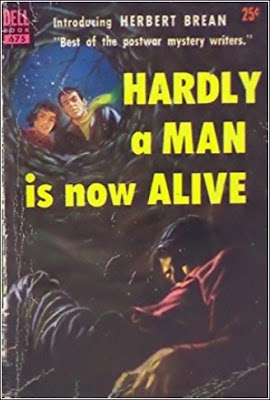 So, while Brean hardly was one of the most prolific mystery writers, he produced one detective novel that garnered somewhat of a reputation among locked room readers.

Wilders Walks Away (1948) was described by Curt Evans as "a fusion of Ellery Queen and John Dickson Carr" in his 2014 review and you could described the plot as Queen-style Wrightsville story with a Carr-like plot. A plot concerning a series of seemingly impossible disappearances, stretching across many generations, in a historical, beautifully preserved New England town. Wilders Walks Away is a very well written, ambitious and imaginative debut with all the hallmarks of a classic, but ended in disappointment with an underwhelming solution.

Barry Ergang's wrote in his 2003 review, which alerted me to Brean, he thought he had found in Wilders Walks Away a companion to Carr's The Three Coffins (1935) and Hake Talbot's Rim of the Pit (1944) for "ultimate greatness," but that "degree of feeling didn't sustain itself" – which didn't stop him from "enthusiastically" recommending it. My fellow Carr Cultist, "JJ" of The Invisible Event, had a similar response and even awarded the book four-stars in his 2017 review.

So, in spite of its weak, underwhelming conclusion, Wilders Walks Away remains Brean's most well-known mystery novel, which I find depressing. There are three mysteries from his hands that are superior to Wilders Walks Away.

The Clock Strikes Thirteen (1954) is an excellent detective-cum-thriller set on an isolated island during a potential outbreak of a deadly, weaponized bacteria. The Traces of Brillhart (1960) is an amusing romp about a sleazy musician who appears to be impervious to death, but his true masterpiece is Hardly a Man is Now Alive (1950). A truly Carr-like detective story about a quasi-impossible disappearance, ghostly manifestations and a historical mystery as a sub-plot, but, more importantly, has a solution that delivered on its premise – which is why it deserves the reputation Wilders Walks Away still enjoys. So, I decided to reread the book to see if my high opinion on it has changed. Nope. :)

Hardly a Man is Now Alive is the third novel about Brean's series-detective and freelance photographer, Reynold Frame, which has been published in the UK as Murder Now and Then in 1952. Somehow, that year is listed on some places as the original year of publication, but it's 1950. 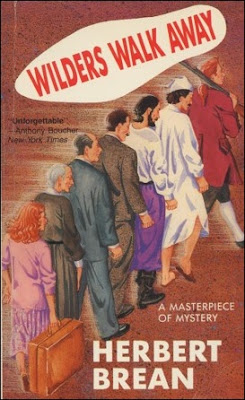 The story begins with Reynold Frame and Constance Wilder, who met in the now too often mentioned Wilders Walks Away, driving a battered convertible to the historical town of Concord, Massachusetts, where they plan to get married by Dr. John Annandale – a one-hundred and four years old man who "knew Ralph Waldo Emerson personally." When he was a boy of twelve, he heard from "the lips of a man who was in it," a 98-year-old Ben Tick, the story of the Concord fight in 1775. But their path to the altar is littered with obstacles.

Firstly, when they arrive at the home of Constance's Aunt Kate and Uncle Bowler, circumstances left them with only a single spare bedroom. So they booked him a room with Tom Satterthwaite down the street.

Frame learns that a previous roomers, J.J. Walmsley, who had his room disappeared six weeks ago under peculiar circumstances and left behind a baffling question: how could Walmsley "walk down an uncarpeted stair," carrying a number of traveling bags, and go past "a room in which other people are sitting" without being heard or seen? And then there's the haunting history of the bedroom itself with its ghostly manifestations.

During the Concord fight, a British soldier was mortally wounded and had died in the bedroom of the Satterthwaite house with "a betty lamp" besides him. The lamp mysteriously disappeared as the soldier took his last breath.

On his first night, Frame wakes up to find a small, sardine can-sized metal box on his bureau with a chain, hook and "a sort of sprout from which the wick protruded" – burning wick gave off a fishy smell. Next morning, the whale-oil lamp has disappeared from the room. More than once, the ghostly, disembodied sounds of "an army marching to a fife and drum" can be heard in the room. Brean's handling of these quasi-impossible situations shows he had learned from the mistakes he made in Wilders Walks Away.

The disappearance of Walmsley and the ghosts of the Revolutionary War are simply another layer of an incredibly stacked plot, instead of the focal point, which were properly clued and explained well before the final chapter rolled around. This really helped. I also think it helped that they were presented, not as impossible crimes, but simply as tricky problems and were put to good use. Even when they were already explained and dismissed. For example, in the final lines of chapter 13, Brean briefly rose to the height of Carr when he superbly used "the sound of the British detachment marching." A cliffhanger that would made any writer of magazine and newspaper serials see green with envy. However, this is still only about half of the plot.

Dr. John Annandale tells the first-hand account he heard as a boy of the battle of Concord, which is a "factual account" except for "the incident of the fleeing officer" and "the presence of Job Wilder," presenting the story with a historical mystery from nearly two-hundred years ago – why did the British officer broke and ran? The fleeing officer, Lt. Percy Nightingale, was the same officer who died and haunts the bedroom at the Satterthwaite house. This is another well-done, properly clued plot-thread with a delightfully simplistic solution that has been "staring everyone in the face for almost two centuries." Only reason why nobody noticed it until now is because "the individual bits of knowledge" were divided between several people. And it took an outsider, like Frame, to put them together. I liked it. And there's a second historical plot-thread, tied to one of the present-day mysteries, involving a long-lost secret from two of the luminaries of Concord's rich past. Still, there's more. So much more. 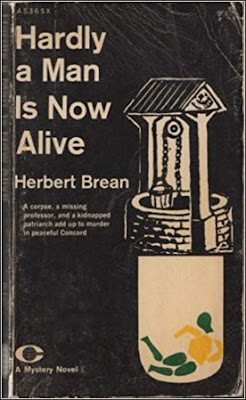 A badly decomposed body of a man is found in an old, disused well behind the Satterthwaite house. Dr. Annandale disappears before the wedding without a trace. A ghost is seen peeking from behind a tree. A spiritualist is very anxious to switch rooms. A séance is held and the missing ghost lamp turns up again.

On the surface, Hardly a Man is Now Alive appears to be an incomprehensibly complex, maze-like detective novel with numerous, interconnecting plot-threads stretching across two centuries, but Brean untangled them with ease and the result is very satisfying – showing how childishly simple everything looked beneath all those layers of obfuscation. Nearly every plot-thread, except for the second historical mystery, were adequately clued or hinted at and the chapters are littered with opening quotes and informative footnotes. Really, the only things missing were one or two floor plans and a challenge to the reader.

Admittedly, all of the individual plot-threads are pretty average by themselves, particular the problem of the murdered man in the well, but, when pulled together, they form a pleasantly busy and satisfying detective story. A detective story you can breeze through in one sitting and not feel like you wasted even a single second. This makes Hardly a Man is Now Alive the mystery novel Brean should be remembered for.
Geplaatst door TomCat on 6/18/2019