Doll Island Murder Case is the sixth entry in The File of Young Kindaichi Returns, originally serialized between October 2015 and January 2016 in Weekly Shōnen Magazine, which was written by Seimura Amagi and illustrated by Fumiya Satō – who drew on the folklore of human-like dolls to dress up the plot. The dolls with their tragic, star-crossed back-stories were used very effectively. 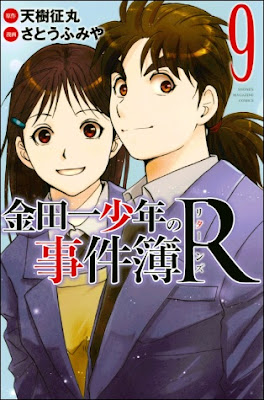 Doll Island Murder Case begins when Hajime Kindaichi is asked by his social studies teacher, Shinobu Tokita, to help her crack a coded message found in a doll that belonged to her late grandmother.

Kindaichi easily deciphers the coded message and it simply tells them to "go to Hitogata Island." Hitogata is a small island not far from Tokyo where, once a year, a doll ceremony is held attended by people from all over Japan together with "the dolls that hide their own feelings."

So Kindaichi, accompanied by Miyuki, travels down to the island to attend the doll ceremony, but, as he reflects back, he had no idea there "an evil and terrifying motive" behind the code – which came to a bloody conclusion on the island of dolls. When they arrive, Kindaichi and Miyuki meet a couple of familiar faces. Inspector Kenmochi has a reason hovering between the personal and professional to partake in the doll ceremony. Yosuke Itsuki is the freelance reporter last seen in The Antlion Trench Murder Case and is accompanied by reporter of Queen Monthly Mystery Magazine, Karin Hoshizaka, who are there to report on three mysterious detective novelists.

Kiriko Kanda, Tomoe Benikoji and Mayako Suzuoka are a writing collective, known as "Persona Doll," who garnered popularity with both their Doll Mystery Series and writing gimmick. The true identity of the three members are a closely guarded and they only appear in public dressed as mute, life-sized dolls with masks. They don't utter a word and only communicate by writing on a small board. There are four more people, Hitomi Shimura, Kagechika Ameno, Soichiro Akagami and Tsuyoshi Tanaka, who all brought a doll with a personal story behind it. Stories full of tragic deaths, murders, suicides and broken lives. And a curse or two.

After they've exchanged the dolls for replacement dolls, miniature copies of the participants, the murderer begins to work like a butcher on piecework.

A headless, legless torso with arms and hands is found clad in the doll costume, one worn by Kiriko Kanda, whose room is spattered in blood and two life-size dolls are standing at the door, but the problem is that even her two colleagues are unable to identify her – because they wrote their novels "through the internet." So even they don't know each others real names or even faces. Naturally, they find out they're trapped on the island, unable to call to mainland for assistance, while someone begins to mutter about a long-dead village elder having returned as the "Cursed Doll."
A second body is found at the doll shrine, presumably Mayako Suzuoka, but this time the murderer elegantly posed the severed bottom part among the dolls. However, the real interest comes when the third body is found, which is presented as an impossible crime. And not a bad one either!

During the ceremony, Kenmochi looks through the observation window, a narrow slit in the wall, when he notices one of the dolls has a human ear, but, when they enter the shrine, the body of the dolls has inexplicably disappeared – leaving only a severed head with a doll mask "staked on a spear." Kindaichi points out that "everyone who followed the doll ceremony rites," including his prime-suspect, possesses an unimpeachable alibi. They were physically unable to enter the shrine, remove the body of the doll, plant the severed head on the spear and leave the shrine within the minute, or two, between spotting the body and entering the shrine.

This impossible rearrangement of the gruesome scene in the shrine is, plot-wise, the best and strongest part of the whole story. Unlike the other parts of the plot, the locked room-trick was delightfully simple, but very effective and satisfying. I expected some old-fashioned trickery with an identical or mistaken room, but this was so much better. Showing the Japanese are the undisputed masters of the corpse-puzzle.

Unfortunately, everything else manages to be simultaneously incredibly convoluted and infuriatingly easy to solve, because, logically, there was only one character who could have had a hand in it. Why the bodies were cut into pieces was not difficult to figure out. A suspicion confirmed when the mask was removed from the severed head. Granted, the idea behind the masked writers was not without merit, but the answer bordered on cheating as it unfairly muddled the case and gave me the idea the murderer had an accomplice, which would have been more convincing and appeared to be in line with an incident early on in the story – assuming it was a hint foreshadowing this part of the solution. This made me very suspicious of one of the suspects. And he turned out to be completely innocent.

So, on a whole, I would say Doll Island Murder Case is a good, but uneven, entry in the series. The story made good use of the tragedy-stained dolls and a setting steeped in doll-lore with an excellent, but ultimately simple, locked room-trick. On the other hand, the murderer was far too easily spotted with the finer details getting muddled in a convoluted plot playing three-card monte with identities. There were also times when it felt as if the plot went through the motions of a Kindaichi story. We have an isolated island with a closed circle of suspects, the avenger-from-the-past motif, the corpse-puzzle and even the dolls aren't entire new to the series (c.f. the excellent House of Wax).

Still, not too bad of a story with a couple of a good ideas, but just not in the same league as such stories as The Headless Samurai and The Legendary Vampire Murders.
Geplaatst door TomCat on 6/14/2019