Last month, I reviewed a two-part episode of the enduring Detective Conan anime-series, The Dracula Villa Murder Case, in which a revered writer of vampire stories is impaled and crucified under apparently impossible circumstances in his locked study with the body lighted up by a running film projected – playing a movie-reel of a classic vampire flick. These episodes reminded me of another vampire-themed detective story, a manga, that has been languishing on the big pile for ages.

The Legendary Vampire Murders was originally serialized in Weekly Shōnen Magazine in 2004 and the story has convinced me that Seimura Amagi is the present-day master of the unbreakable alibi. Amagi is so much better at plotting seemingly impregnable alibis than he's at devising locked room-tricks (e.g. the elaborate, grand scale alibi-trick from The Prison Prep School Murder Case).

Hajime Kindaichi is on a bicycle tour of Japan and decides to invite his childhood friend, Nanase Miyuki, to spend a few days with him at his next stop. An almost entirely abandoned village in the middle of nowhere!

The name of the place, Buran Village, originates from "Bran Village in Transylvania" and, according to the legends, Romanian immigrants had been chased out of the village on "the suspicion that they might be vampires," but there appears to be no historical basis for this story – as the countries didn't even appear to have a formal, diplomatic relationship until 1902. So this was purely done to transplant the legend of the Transylvanian vampire to Japan. A legend that appears to be very much alive in the deserted village.

Six years previously, the vampire legend had stirred back to life when villagers witnessed "a strange scene in the middle of the night." A cloaked man with a black hat was seen walking towards the abandoned hotel and appeared to have mental control over a woman in a white dress, who sleepwalked behind him, but when a group of young man, armed with wooden crosses, investigate the hotel they make a gruesome discovery in the basement – a body of the woman with two bite marks in her neck. The coroner didn't find "a single drop of blood" in the body. As if she had been sucked dry by a vampire!

This incident was the death knell for the already struggling, partially depleted village and the place would have been a ghost town had it not been for the presence of a peculiar boardinghouse. 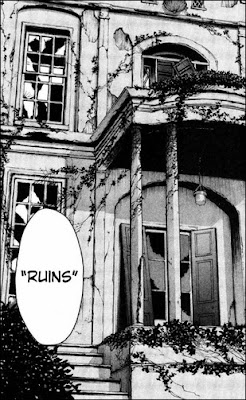 Hirakawa Tooru bought the abandoned hotel and turned it into a boardinghouse, fittingly named "Ruins," which looks like a derelict mansion, but the guest rooms were refurbished, comfortable and clean. A childhood classmate of Kindaichi and Miyuki, Kifune Youhei, is working part-time at the boardinghouse and hopes to make the place a haunt for "ruin maniacs" (i.e. urban explorers). His presence is one of the reasons why Kindaichi stopped in Buran Village.

There are more people who found there way to this reclusive, empty place. Nagareyama Shintarou is a novelist who's writing a book with the boardinghouse as a setting and Nekoma Junko is a freelance writer collecting data on abandoned ruins. Futaganu Ikuo is a physician and Kaitani Asaka owns a boutique, both guests of the "Ruins," who were found poking around the abandoned hospital. And their behavior and obvious lies were suspicious to say the least. Hiiro Keisuke is a young man who was stranded at the hotel, but his appearance and complexion has a suggestion of the grave. Finally, there's Minato Aoko, a staff member of the boardinghouse, who fancies herself to be somewhat of an amateur detective and Inspector Kenmoichi – asked by Kindaichi to accompany Miyuki.

So the stage is set for murder, but there's a prelude when Miyuki is kidnapped by the murderer. The killer is dressed in a long, dark coat and has bandaged face with what appears to be fangs. This doesn't happen all the time, but the Kindaichi series has seen more than one costumed murderers (e.g. The Alchemy Murder Case). Sometimes this series really is a blend of Scooby Doo, Where Are You? and a 1980s slasher movie.

During her captivity, Miyuki had been tied up and had to look on, helplessly, as the vampire murdered one of the guests, Kaitani Asaka. Just one of the perks of being friends with Kindaichi!

Miyuki and Asaka are eventually found in one of the guest rooms on the first floor of the boardinghouse. They both have bite marks in their neck, but only Miyuki lived to tell about it. The problem this murder presents is that nearly everyone possesses a perfectly acceptable alibi, because the only way to reach is the first floor is by either climbing a spiral staircase or crawl into a small dumbwaiter with a weight-limit – which are eliminated as possible entries to the first floor. A brilliant and bone chilling alibi-trick that's eligible to be considered an impossible crime as it involves a physical impossibility. I commented on Dan's 2017 blog-post, "But is it a Locked Room Mystery? The case of the impossible alibi," when an alibi-trick qualifies as an impossible crime and I think this one makes the cut. The chilling explanation of the impossible alibi is another good example of how closely related Japanese mystery writers are to the horror genre. And they often put their horror material to good and practical use. Great stuff! 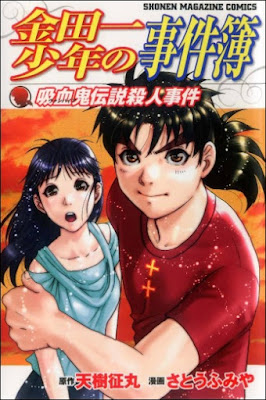 Miyuki had also been found with bite marks in her neck and, according to the legend, "anyone who's attacked by a vampire will become a vampire." There might be a grain of truth in it when a murder happens that only Miyuki could have committed!

A pool of blood with a body is found in Miyuki's locked guest room, bite marks in the neck, but Miyuki had been in constant possession of the room-key and there are no duplicates. So how did a murderer manage to leave a body inside a locked room? The explanation to this problem is a relatively simple one, but the idea felt fresh and original. I've seen a similar locked room setup in another detective story, but the ending in that was, on a whole, unimpressive as the solution turned on an age-trick. Amagi here cleverly reversed that solution and the result is possibly new variation on the locked room mystery. So, once more, this is great stuff!

The identity of the murderer was better hidden than usual, but you might want to write that down to me stubbornly giving the obvious red herring the fish-eye throughout the entirety of the story. I refused to let go of that one possibility and overlooked a hint or two. Amagi even gave the shopworn motive, carted out in nearly every volume, an additional layer of depth with the horrific back-story of the past murder. The back-story would make for a great horror or thriller story when told from the perspectives of the victim and her killer. As I said before, Japanese mystery writers tend stand closer to the horror genre than their Western counterparts. The Legendary Vampire Murders is a good example of that.

So, all in all, The Legendary Vampire Murders has one of the strongest plots in the series with an ingenious alibi-trick, as classic as it's sickening, and an excellent impossible crime. The rest of the plot, especially the motive, were well handled, but the murderer's alibi and locked room illusion are the main draws of the story. A pure puzzle-plot detective story that comes recommended to mystery readers who love busting alibis and explaining miracles.
Geplaatst door TomCat on 2/19/2019