John R.S. Pringle was a veritable one-man factory of crime fiction, who wrote hundreds of novels, short stories and plays, published under a handful of pennames and translated into more than thirty languages, but, upon his passing, his work began to fall into neglect – until the redoubtable Philip Harbottle intervened. Since then, a good chunk of his detective novels, thrillers and short story collections have been reissued by the Linford Mystery Library and Endeavour Media. Such as the interesting locked room novella I reviewed last year, The Beard of the Prophet (1937).

I had planned to return to his work with the promising-sounding The Last Warning (1962), but Harbottle recommended The Royal Flush Murders (1948). A mystery novel with "a very much better locked room murder" than the one from The Last Warning. Well, say no more! 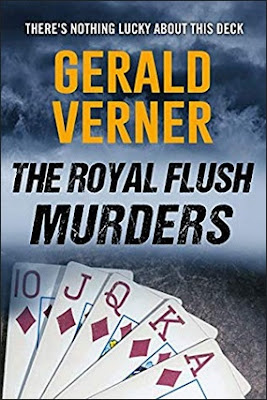 The Royal Flush Murders is the ninth book in the Superintendent Robert Budd series, published as by "Gerald Verner," which has a plot with a distinctly American flavor to it. I can only describe it as S.S. van Dine's The Greene Murder Case (1928) or Ellery Queen's The Tragedy of Y (1932) as perceived by John Russell Fearn (c.f. The Man Who Was Not, 2005).

The Royal Flush Murders begins with Superintendent Robert Budd, of Scotland Yard, looking askance at a newspaper report of a murder with, what he called disparagingly, "story-book stuff," because "murder in real life was usually sordid" – without "sealed doors" or "long lists of suspects." However, the murder at the quaint, old-world village of Long Millford certainly has some very unusual features.

John Brockwell was the youngest son of Mr. Henry Brockwell, despised by everyone, whose body had been found by a forester "impaled to the trunk of a tree with a pitchfork" with the ten of diamonds "pinned to the lapel of the dead man's jacket." Three weeks pass without any arrests being made and the local authorities decide to call in Scotland Yard. And this brings Superintendent Budd to Long Millford.

When he arrives at The Croft, Budd finds a highly dysfunction family. Or, as the locals call them, "a very queer lot." Henry Brockwell is a boorish loudmouth with a short temper and constantly fights with his wife and children, which even can get physical. The two remaining children, James and Sandra, don't like each other very much either. Nor do they appear to mourn the death of their younger brother. They simply yell, fight and throw around accusations in front of the police, but, in the middle of all of this, a letter arrives with the five playing cards of a royal flush in diamonds written on it – a cross was drawn besides the ten of diamonds. The murderer more than delivers on this veiled promise of more bloodshed.

Budd has to look on, often rather hopelessly, as one family member after another gets shot, stabbed and strangled. Only clues the murderer left behind were the playing cards of the unbeatable hand in poker.

The long list of suspects with potential motives, such as revenge, extends all over the village, but Budd also has two other problems to contend with. One of them being the presence of an unpleasant tabloid reporter, Joshua Craven, who's a sour man with "a perpetual grievance against his fellow men" and functions here as a rival detective, but often appeared to act as a lazy plot-device, or deus ex machine, by uncharacteristically dropping clues and hints – which actually turned out to have simple, but decent, answer. A second problem is Budd's direct superior's getting antsy about the lack of progress, bad press and the mounting body count. And they even threaten to take replace him, which would be a black mark on an otherwise impeccable record. 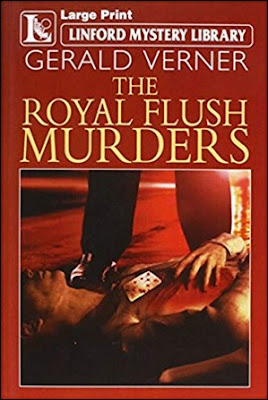 When a fourth murder is committed under completely impossible circumstances, Budd is only given four more days to find the murder or be taken off the investigation completely.

Mrs. Brockwell is shot to death in her bedroom, while Budd was watching the door, and the only window was not only shut, but fastened on the inside and suicide is out of the question, because she could not have shot herself under her shoulder-blade. And there was no weapon found in the room. So how did the murderer escape from the room without being seen? The locked room-trick is modeled around a pretty standard, often used, idea in impossible crime stories, but was put to decent use here. If only as a fairly minor side-puzzle. The only problem with it is that it made it even more obvious who's behind the murders. And this is where the plot becomes quite unfair to the reader.

More than once, Budd hammered on the fact that "the most important thing about these crimes is the motive." If they knew why someone was busy exterminating the whole Brockwell family, they have have their man, but Verner holds these cards close to the chest. So you can figure out who's behind these murders, but the motive remains murky until the end. This made me eye another potential suspect based on, what I assumed was, a very lively clue.

So, yeah, the plot of The Royal Flush Murders didn't exactly gave me the "unbeatable hand" of its namesake, but it was still a really quick and entertaining read with an interesting take on the American-style mansion mysteries – transplanted here to Jolly Ol' England. More importantly, I started to like the plodding Superintendent Budd and ended the book with a line perfectly describing his role in the story, "I'm like Great Britain... I lose all the battles except the last one." I might have found a companion for Fearn in Verner!

Just so you know, I'll return to Verner with my next read, because Sorcerer's House (1956) is supposedly one of his better detective novels and very John Dickson Carr-like. Well, say no more!
Geplaatst door TomCat on 6/25/2019