The Inugami Clan (1951) by Seishi Yokomizo

Seishi Yokomizo was one of Japan's most celebrated mystery novelists and his series-detective, Kosuke Kindaichi, is as iconic a figure in the East as Sherlock Holmes is in the West.

Kosuke Kindaichi is described as a less-than-impressive character in his mid-thirties with an unruly mop of hair and wearing an unfashionable serge kimono and wide-legged, pleated hakama trousers – which are both very wrinkled and worn. He has "a slight tendency to stutter" and a habit "to scratch his tousle-haired head with frightful vigor," but also possesses a remarkable "faculty for reasoning and deduction." A talent he puts to use as an unassuming private investigator. 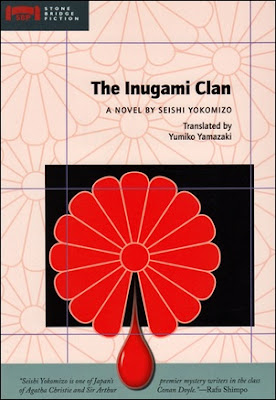 Kindaichi first appeared on the scene in Honjin satsujin jiken (The Daimyou's Inn Murder Case, 1946), "a locked room tale about a bride and bridegroom found brutally slain in a snow-bound annex," which was praised by Edogawa Rampo as "the first novel of reasoning in the Anglo-American style in the world of Japanese detective fiction." This is not very surprising since Yokomizo was heavily influenced by John Dickson Carr and Roger Scarlett's Murder Among the Angells (1932). A mystery novel known in Japan as Enjeruke no satsujin (The Murder of the Angell Clan).

Frustratingly, The Daimyou's Inn Murder Case has yet to be translated into English and there are, as of now, no concrete plans to remedy this gross oversight. Even John Pugmire, of Locked Room International, hasn't glanced in the direction of this reputed classic of the impossible crime story.

There is, however, one of Yokomizo's most famed detective novels that did made it to our shores, namely Inugamike no ichizoku (The Inugami Clan, 1951), which is "a Gothic tale of murder" with a status and prestige in Japan akin to that of Conan Doyle's The Hound of the Baskervilles (1902) and Agatha Christie's And Then There Were None (1939) in the West – a well-deserved reputation. The Inugami Clan is a monumental novel revolving around the warring branches of the titular clan over the inheritance of the dead family patriarch, which brims with long-held family secrets, resentment and a series of grotesque murders steeped in symbolism.

I read The Inugami Clan all the way back in 2006 or 2007 and wanted to see if this landmark novel of Japanese detective story held up to re-reading. Well, it absolutely did.

First of all, I need to point out something I overlooked on my first read, or failed to remember, which is that the story (especially the opening) has hints of the HIBK (Had-I-But-Known) school of detective fiction. The omniscient narrator ends the first chapter by telling the reader that, in hindsight, the death of the head of the family "set in motion the blood-soaked series of events that later befell the Inugami clan" or, when Kindaichi rescues one of the principal characters from a sinking boat, that this was "the first event that disrupted his investigation" – effectively preventing him from solving "the case much earlier than he did." This style is closely associated with female mystery and suspense writers, like Mary Roberts Rinehart, Dorothy Cameron Disney and Anita Blackmon, but you sometimes see it crop up in the work of male writers (e.g. Baynard Kendrick's Blood on Lake Louisa, 1934).

The tragedy begins with the passing of "the so-called Silk King of Japan," Sahei Inugami, whose life story was a rags-to-riches and began when, as a 17-year-old pauper, he arrived at the Nasu Shrine on the shores of Lake Nasu. Sahei would have certainly starved or frozen to death had it not been for the generosity of the priest, Daini Nonomiya, which is when fortune finally began to smile on Sahei and he felt he owed the priest a lifelong debt. However, as the omniscient narrator reminds us, everything, even gratitude, has a limit that should not be exceeded and Sahei's excessive gratitude towards the Nonomiya family would "embroil his own kin in a series of bloody murders after his death."

During his long, successful life, Sahei sired three daughters, Matsuko, Takeko and Umeko, by three different mistresses, but never married any of them and never showed any affection to his daughters – which he reserved for the granddaughter of the Nasu Shrine priest, Tamayo Nonomiya. A beautiful, 26-year-old woman who had been brought up in the Inugami household and would come to play a principle role in the murders. A role given to her by a devilishly worded will.

Several weeks pass before the will can be read, because Sahei instructed to wait until one of his grandsons, Kiyo, returned home from the front in Burma, South-East Asia, but was disfigured in battle and has to wear a rubber mask. Something else that obviously will come to play a role in the subsequent events at the lakeside villa of the Inugami clan. But when the will is finally read, it hits the entire family like a bombshell.

Sahei bequeathed the three heirlooms of the family, the ax, zither and chrysanthemum, which "signify the right to inherit," to the granddaughter of the priest, Tamayo. One of the many conditions in the will is that Tamayo has to marry one of Sahei's three grandsons, Kiyo, Také or Tomo, within three months of the date of the reading of the will. She is only released from this condition if all three grandsons refuse to marry her or die before the three months are up. There are more conditions attached to the will and one of these conditions would give an apparent illegitimate son, Shizuma Aonuma, a slice of the estate. And this does not sit very well with the family. Particularly with the three daughters of Sahei.

So here you have a household as troubled, and strained, as that of Henry VIII of England and we all know how that story played out after the king passed away. This story is no different.

Toyoichiro Wakabayashi of the Furudate Law Office in Nasu can see the writing on the wall and summons a private detective, Kosuke Kindaichi, but, before he can tell his story, he's poisoned in Kindaichi's hotel room when the detective was out on the lake saving Tamayo from drowning – one of the most recent attempts on her live. All of this is still only the prelude to what's about to happen at the lakeside villa.

After a hundred pages, Kindaichi is summoned to the village and ushered into a chrysanthemum garden, tucked away within a European and Japanese style gardens, where a row of handmade chrysanthemum dolls stood that represented a scene from a well-known kabuki play about a legendary hero of medieval Japan. The heads of one those dolls was replaced with the severed head of Také! A scene as gruesome as it is memorable and an obvious reference to one of the family heirlooms. So there are more murders to be expected and the last one is particular memorable as the victim is found, upside down, with his legs sticking out of the frozen lake. I believe this scene is still regularly parodied in Japanese detective stories, but our resident expert, Ho-Ling Wong, could probably tell more about that.

The Inugami Clan is an intricately structured, richly detailed detective story with a plot succeeding admirably in being incredibly complex and deadly simple at the same time.

You can probably deduce the identity of the murderer and what possessed this character to commit a series of horrific murders, but the cussedness of all things general and the cross-purposes of several closely connected characters do their damnedest obscuring the truth – every move, or countermove, undertaken by these characters are properly motivated and believable. This actually reminded me very strongly of Christianna Brand's splendid London Particular (1952).

So these characters and their very human, understandable motives gave the plot of The Inugami Clan a warm, human and, above all, a tragic touch that makes it so much more than a mere game of chess. Throw in a truly iconic detective character, bizarre clues and a string of grotesque murders, dripping with blood and symbolism, and you get one for the ages. A classic mystery that will not fail to satisfy the most fervent readers of the traditional, plot-oriented detective story, but the numerous references to the, as of yet, untranslated cases of Kosuke Kindaichi can be experienced as frustrating. I pray this will be remedied in the coming years, but, until then, read (or re-read) this richly plotted, well-characterized and beautifully written gem from the land of the rising sun.

On a final, semi-related note, I wanted to return to Christopher Bush for my next read, but might slip in a review of a detective manga with a link to Yokomizo's Kosuke Kindaichi.
Geplaatst door TomCat on 5/11/2018