Monk was a popular TV-series that run for 8 seasons, comprising of 125 episodes in total, which aired between 2002 and 2009 on the USA Network.

The unlikely hero of the show is the title-character, Adrian Monk, who used to be a homicide detective, but the murder of his wife, Trudy, left him crippled with grief and unable to control a litany of phobias that could fill a number of leather-bound volumes – complete with "footnotes, historical references, photographs, diagrams and a detailed index." Monk also has OCD and wants everything "to be even, straight, balanced, symmetrical, organized and consistent." Everone and everything has to adhere to his "ridiculously arcane rules of order." 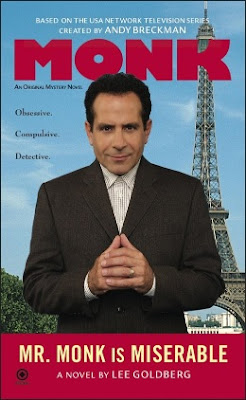 On the flip side, Monk has a hyper-analytical mind with a memory like a steel trap and razor-sharp, observational abilities that allows him to tell "the difference between two ticking watches." So ever since the death of his wife, Monk worked as a special consultant to the San Francisco Police Department he "closed hundreds of puzzling cases" for Captain Leland Stottlemeyer.

All the while, he's slowly working on his recovery, in order to earn back his badge, by regularly visiting his long-suffering psychiatrist, Dr. Charles Kroger, and is aided in his work and daily life by a personal assistant, Sharona Fleming – who was replaced in the third season by Natalie Teeger. They had to accompany their phobia-riddled, OCD-plagued employer as he destroys apparently iron-clad alibis (e.g. Mr. Monk and the Marathon Man, 2003) and explains the occasional locked room mystery (e.g. Mr. Monk is On the Air, 2007).

The show also spawned a series of tie-in novels, published between 2006 and 2015, of which the majority were written by Lee Goldberg with an additional four titles penned by Hy Conrad. This blog-post will be looking at one of the titles written by the former.

Goldberg is an author, screenwriter and producer who worked on the superb A&E Nero Wolfe TV-series, SeaQuest DSV and continued the Diagnosis Murder series as a short-lived run of tie-in novels. Goldberg is also one of the founders, together with Max Allan Collins, of the International Association of Media Tie-in Writers (IAMTW).

There are altogether nineteen Monk novels and the tie-in books actually outlived the original TV-series by six years!

I had two of the Goldberg books on the big pile, Mr. Monk and the Two Assistants (2007) and Mr. Monk is Miserable (2008), but never got around to reading them because something else was constantly demanding my attention – a gift and a curse, to quote Monk, of the current Renaissance Era of the traditional detective story. Recently, I had the inexplicable urge to revisit the series and decided to finally take a stab at one of the books. And it turned out to be quite different from what I expected.

Mr. Monk is Miserable is the seventh entry in the series and takes place between the events of the previous novel, Mr. Monk Goes to Germany (2008), and the TV episode Mr. Monk is On the Run (2008), which brings Monk and Teeger to Paris, France. Mr. Monk is Miserable can best be described as a comedic travelogue with detective interruptions and the opening chapters really set the tone for the rest of the story.

In the previous novel, Monk, "in an act of desperation and insanity that will probably go down in the annals of stalking history," followed Dr. Kroger to a psychiatric conference in Lohr, Germany, where he became enmeshed in a murder case. Mr. Monk is Miserable picks up where Mr. Monk Goes to Germany left off and begins with Teeger blackmailing Monk into delaying their departure in order to visit France on his dime, because she needed a real holiday and reasoned her employer owed her one for ruining her Hawaiian getaway – which is an ordeal described in Mr. Monk Goes to Hawaii (2007). However, before they can land in France, a murder is committed aboard the plane.

One of the German passengers is poisoned under unusual circumstances, but Monk immediately deduces the identity of the murderer, motive and the ingenious murder method. I think this poisoning is the cleverest and most original of all the murders in this book, which read like one of those ingenious little stories from Gosho Aoyama's Detective Conan, but felt completely wasted in this brief vignette. I think more could have been done with it.

Anyway, the detective elements take a backseat to the comedy bits when Monk and Teeger arrive in France.

The problems in this portion of the story consists of finding a hotel that fit Monk's "unique requirements." A four-star hotel was out of their price range, but a three-star hotel wouldn't do either, because it was "one star short of an even number" and that left Teeger with having to find an affordable, two-star hotel that met her employers standards of cleanliness, attention to detail and preferable with symmetrical architecture. Teeger actually succeeded in finding a place, but their single rooms turn out to be on a floor with an uneven number. So they end up sharing a room on another, even-numbered floor. Monk is not pleased about the prospect of having to share a room with his assistant.

However, the sight-seeing scenes of Paris are not solely played for laughs and giggles. Monk and Teeger share a couple of moments, like when Teeger is overwhelmed by the memories of her dead husband, Mitch, but Monk shielded her outburst with his body from passerby's. And even offered a sanitary wipe.

Mr. Monk is Miserable begins to resemble a detective story again with the halfway mark in sight and begins with a visit to les catacombes, an underground labyrinth where the bones of six million souls rest, but Monk spotted a recent addition to the maze of bones – a skull of a man who been recently murdered. What gave it away? The modern fillings in the teeth of the skull. A small, out-of-pace detail that only Monk would spot and this isn't even the last murder slowly spoiling Teeger's holiday.
Teeger drags Monk along to a restaurant, called Toujours Nuit, where patrons ate in total darkness and were served by blind waiters. A woman, who's introduced as Sandrine, is placed at their table and she tells Monk that she knows who he found in the catacombs, but what happens next amounts to an impossible murder under cover of complete darkness. A dull thunk is heard and when the lights come on the woman is lying on the ground with a steak-knife buried in her chest.

So how did the murderer, if this person came from outside, enter the restaurant unseen? The door was locked with a security camera on the outside and the monitor was constantly watched. The backdoor was unlocked, but this lead straight through the middle of the kitchen where the chefs were at work. And they're not blind. Finally, how did the murderer manage to strike with deadly precision in a pitch-black room littered with people and obstacles?

Sadly, the way the murderer entered the locked and watched restaurant, while fitting in with the overall plot, is horribly outdated and the impossible stabbing in a pitch-black room doesn't really have an inspired solution. My fellow mystery blogger, Puzzle Doctor, would probably place this locked room sub-plot in the only-one-solution-makes-sense school of plotting. So the solution is, logically speaking, acceptable, but Stacey Bishop, John Dickson Carr, Baynard Kendrick and Ellery Queen have all tackled a similar problem with more deviousness and showmanship than Goldberg. I even recall an episode from Foyle's War (The White Feather, 2002) that has a simplistic, but nifty, method for shooting someone in a blacked-out room.

So, plot-wise, Mr. Monk is Miserable is a featherweight and the who, or why, does not add enough extra weight to tip the scales, but the story, as a whole, is incredible readable and genuinely funny at times – which makes for a good chuckle or two. Adrian Monk will stand as one of the great (television) detectives of this century and his character was fully exploited here. Only drawback is that this came at the expense of the plot. However, it was a fun read and will try Mr. Monk and the Two Assistants one of these days, because the plot is reportedly more solid in that one. So this is a story that will definitely be continued on this blog.

On a final, related note: my only real disappointment with Monk is that we never got a crossover with Columbo. I know we'll never see Peter Falk and Tony Shalhoub together on the small screen as Adrian Monk and Lieutenant Columbo, but that we never got them together in a book borders on the criminal.
Geplaatst door TomCat on 5/04/2018