In my previous post, I reviewed a humorously written detective novel with an academic background, R.T. Campbell's Unholy Dying (1945), in which the comedic detective and avid reader of locked room mysteries, Professor John Stubbs, is confronted with "the exact opposite of the closed box mystery" – a poisoning in an unlocked room to which two-thousand people had free access. So, for today, I have found a locked room novel about a poisoning inside "a veritable fortress."

Maurice C. Johnson is an extremely obscure mystery writer, of whom very little is known, except that he wrote at least two detective novels, Damning Trifles (1932) and It Takes a Thief (1932). Both were published by Alfred A. Knopf, New York. 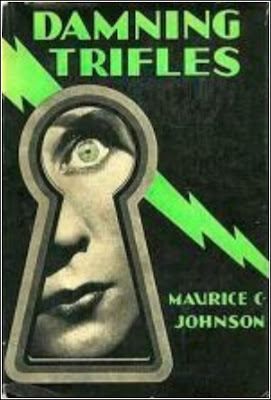 Back in 2013, Damning Trifles emerged from obscurity when John Harrington quoted a blurb from The Sun, 1932, in Keeler News #82 of the Harry Stephen Keeler Society. According to the blurb, Keeler was the author of Damning Trifles, but none of "the Keeler experts who have read the book agree." Unfortunately, the link to the news letter is as dead as a door nail, but this mistake from '32 caught the attention of Keeler's biggest champions today, Ramble House, who reprinted the book regardless in 2014 – which caught my eye for a very different reason. Everything about the (surface) plot struck me as an impossible crime story by one of my favorite alternative mystery writers, John Russell Fearn.

Damning Trifles centers on an important invention (Account Settled, 1949) and the scene of the seemingly impossible murder is a photographic laboratory (Vision Sinister, 1954). Interestingly, Johnson has one of his characters say how he can't "disprove one atom of this evidence" and later utters the phrase "every atom of evidence." I remember more than one of Fearn's characters throwing up their hands and saying they hadn't "an atom of proof."

Now, don't get me wrong here. I'm not saying Johnson could have been a twenty-four-year-old Fearn and Damning Trifles represents his first, tentative steps as a mystery novelist. Johnson was an American, while Fearn was English, but it's fascinating to see how closely (plot-wise) their work appears to align.

The protagonist of Damning Trifles is a newspaper reporter, Robert "Bob" Rollins, who "pulled off two big murders beats" for the Chicago Leader and the opening has him lecturing a colleague on the impossibility of a successfully premeditated murder – because a planned murder always "presupposes a motive." When you have the motive, in combination with those damning trifles (i.e. clues), you have your man. Rollins gets another opportunity to put his theories into practice when a murderer strikes very close to home.

Rollins is engaged to Nora Stevens and his future father-in-law, Alexander Stevens, has developed a brand new color-process for photography, which is guaranteed to make millions, but Stevens wants to give his invention to the world – intending to publish the formula in a scientific magazine. This valuable formula is safely locked away, in an office safe, in his fortified laboratory. A place with walls of solid brick and two windows, glazed with frosted glass, with heavy iron bars cemented deep into the stone. The door and transom are of three-inch oak and a massive lock, "such as is rarely seen outside of a stronghold containing treasure," was mortised into that three-inch of oak and can only be opened with a special key. A unique, corrugated key of which there are no duplicates. So not even a bed-bug could enter the laboratory unless he either had the key or sledges and dynamite.

After a brief disappearance, Alexander Stevens is found behind the solidly locked door of his hermetically sealed photographic laboratory, sprawled across his desk, with the unique key on the middle of the desk. A whiskey-glass with frosted crystals at the bottom is standing next to it and a note is found under the body saying, "I bid the world good-by." Detective Jim O'Connell quickly comes to the conclusion that Stevens has taken his own life, but Rollins refuses to believe he committed suicide. And, since he has been given a one-week notice from his newspaper, he has the freedom to devote his time to proving the police wrong. 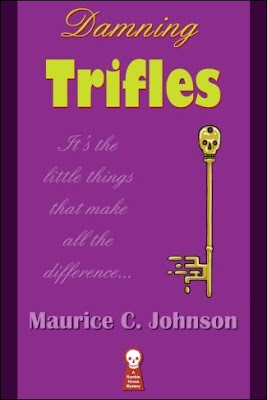 Rollins is joined by a long-time friend, Bill Hackett, who's the police department's photographic expert and analytical chemist, but he also received a one-week notice for illegally supplying Rollins with a print of a crime-scene photograph – decided to play legman to his armchair detective. Or, as Hackett described it, Rollins scarcely left Stevens' laboratory to search for clues or evidence. And barely performed any physical labor "except for lifting the telephone off the hook" and "hanging it up again." Hackett is not entirely wrong. Rollins has to get physical, but this mainly has to do with the never-ending attempts that are made on his life.

Damning Trifles has a record "eleven attempts at murder," not all on Rollins, of which some had very creative methods. An attempt to poison Rollins with cyanide could have worked, if it had succeeded, as a locked room murder.

Yes, for the most part, Rollins functions purely as an armchair detective and draws up lists with facts and questions, which he draws conclusions from, but sometimes its more guesswork than actual deductions. Such as "deducing" where a hypothetical letter could be found. This was an educated guess, at best, but makes for some fun, purely amateur, detective work. My favorite scene of this is when Rollins performed the locked room-trick in the photographic laboratory for a blindfolded Hackett and the sounds he heard around him beautifully doubled as clues to the trick the murderer used.

The solution to the puzzle of the hermetically sealed laboratory was not bad at all and pretty satisfying, not too easy or overly complex, which was easy to visualize, but a drawing was still included – showing how the murderer found the proverbial "Judas Window," or "Unguarded Path," giving access to the room. Granted, there was an aspect of the room that was not revealed until the solution was revealed and variations on this specific trick has been used before and since Damning Trifles was published. Most notably the more modern interpretations that can be found in the Detective Conan and Kindaichi series, but, on a whole, this version of the trick was handled pretty well and liked the positioning of the impossible problem. I liked it and can recommend it to my fellow locked room readers on that account alone.

As you probably noticed, I haven't even touched on the close-knit circle of suspects. The reason for this is that there are, at a pinch, only two viable suspects and assumed this was a how-was-it-done, along the lines of Victor MacClure's Death Behind the Door (1933), but then it appeared as if Johnson was going to pull an unknown "X" out of thin air. Only to come out with a nice little surprise twist. Once again, like with the locked room-trick, not all of the relevant information was fairly shared with the reader. Somehow, that didn't really bother me here. I suppose it was the idea of reading a locked room mystery that feels like it could have been written by Fearn. This is why so many fans of John Dickson Carr love Hake Talbot.

So, my opinion of Damning Trifles is a little colored, but that has not blinded me to the obvious flaws of the plot. Such as the spotty, incomplete clueing. You should not expect a classic impossible crime novel going in, but something more along the alternative lines of the more unconventional, often amusing and even clever, locked room mysteries such as Stacey Bishop's Death in the Dark (1930), Joseph B. Carr's The Man With Bated Breath (1934) and W. Shepard Pleasants' The Stingaree Murders (1934) – which means that it will not be to everyone's taste. However, I still very much enjoyed my time with it and really liked the impossible crime.
Geplaatst door TomCat on 6/10/2019