Inspector De Klerck and the Death Sentence (2019) by P. Dieudonné

I hadn't planned on doing another review of a non-English detective novel, but a small, independent publisher, E-Pulp, kindly provided me with a review copy of Paul Dieudonné's Rechercheur De Klerck en het doodvonnis (Inspector De Klerck and the Death Sentence, 2019) – who has been billed as the pupil of the late A.C. Baantjer. A former police detective, with four decades of experience, who went on to become the most popular mystery novelist of my country and his work introduced me to the genre. So I was quite curious to see how well Dieudonné's debut stacked up against my fond memories of Baantjer. The answer: surprisingly well. 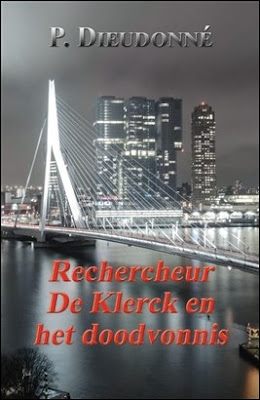 Paul Dieudonné grew up in the Netherlands, but immigrated with his family in the late 1960s to Canada and ran an antiquarian bookshop in Montreal, until health issues forced him to sell the bookstore, but through Baantjer he continued to maintain a link with his homeland. And this inspired him to follow in the footsteps of the Nestor of the Dutch politieroman (police procedural).

To use his own words, Dieudonné wanted to write "a book with the same feeling and style as a Baantjer." He described his debut novel as his "tribute to the grandmaster" and dedicated the book to his memory. Slowly, the waves of nostalgia began to form.

Inspector De Klerck and the Death Sentence is set not in Amsterdam, but in the second biggest city in the country, Rotterdam, which was an excellent decision, because Amsterdam has been done to death as a backdrop for Dutch police series – to the point of fatigue. So Rotterdam is a welcome change of scenery for this type of Dutch police novel which often have a strong, regional flavor to them.

The protagonist of the series is the titular policeman, Inspector Lucien de Klerck, who wears sunglasses with a uv-filter, because a genetic defect made his eyes incredibly sensitive to the ultra-violet radiation in sunlight. Personality-wise, De Klerck is the inverse of the typical brooding, cynical and troubled policeman of the contemporary misdaadroman (crime novel). De Klerck is an optimistic, good humored policeman who's married to a farmer's daughter from Friesland, Annie, who live on a house boat and they love to move around the city with it. Since a few months, De Klerck has a new assistant, Ruben Klaver, who he described as "a boisterous talent."

Inspector De Klerck and the Death Sentence begins with the arrest of "an alleged burglar and safe-cracker," Jacco Fonk, who had been caught by hidden security camera when he slipped into an office building of an investment company, but the details are curious to say the least – because he entered the building without picking any locks. More curiously, the security camera registered how Fonk locked the door behind him and then broke it open again with a crowbar. Even more baffling, the director of the burgled GreenDreamInvest, Bart Bovend'Eerdt, comes to the police station to request the release of Fonk. He claimed the whole burglary was a big misunderstanding and simply part of a bet he had with a friend to test his security system.

So, with the police report rescinded, De Klerck had to let Fonk go, but merely an hour later, Bart Bovend'Eerdt takes his own life in a spectacular and very public way.

Bovend'Eerdt stumbled to the Erasmusbridge, tied one end of "a blue, plasticized washing line" to the railing, placed the noose on the other end around his neck, climbed up and "fell backwards." A number of security cameras caught everything from the moment he appeared on the bridge to how "the fall jerked to a halt" as the body "dangled wildly" at the end of the makeshift noose. More importantly, the footage showed Bovend'Eerdt had been alone on that part of the bridge. De Klerck and Klaven eventually find a suicide note and evidence Bovend'Eerdt has been preparing for the end. What else could it have been than a suicide? De Klerck has his doubts. And not without reason.

Sadly, the mysterious hanging at the Erasmusbridge is not an impossible crime and the method to hang two more people from the same bridge is as prosaic as it's disappointing. Thankfully, it wasn't done by hypnoses or a mind-altering drug, but the solution was still a bit of a letdown. I was reminded of Stuart Palmer's The Puzzle of the Happy Hooligan (1941), in which people are found with a broken neck, but lacked any physical signs of having struggled or resisted their attacker and appeared to have been an impossible crime – a big deal was made about the murder method. Only to be letdown by a very simplistic, uninspired solution.

However, while the how behind the murders was disappointing, to say the least, the who-and why were impressively done and a delightful throwback to the great detective stories of yore! Particularly the choice of murderer is a tip of the hat to the classics. Very well done!

Appie Baantjer preferred to work with a tiny, closed-circle of suspects of four or five credible suspects, but Dieudonné used a slightly larger cast of characters from the victim's private and professional life. There are former employees of the victim's struggling company. Such as a disgruntled bookkeeper and a missing deputy director. An older brother who throws shade at his sister-in-law and refers to her as "the witch." Evidence has come to light linking the victim to a group of hard-bitten, ruthless criminals from Amsterdam and this brings De Klerck to the old capital where he meets a thinly disguised replica of Baantjer's well-known police-detective, Inspector Jurriaan de Cock, who's only referred to as "Jurre." Still a spot-on imitation and love the idea De Cock is still dragging his tired, old feet through the streets of Amsterdam as he patiently hunts down thieves and murderers. This country hasn't been the same without him.

Well, Dieudonné more than delivered on the promise of writing a police novel that felt like it could have been written by Baantjer. Not only is the storytelling and style very reminiscent of Baantjer, but De Klerck and Klaver are typical Baantjer characters. You can see a reflection of De Cock, Vledder and Van Opperdoes in them.

However, Inspector De Klerck and the Death Sentence is not an outright pastiche of Baantjer. There are many obvious nods and winks to Baantjer, but this series can clearly stand on its own two legs as it basically plays Monk to Baantjer's Columbo. Or should that be Paul Halter's Dr. Alan Twist to John Dickson Carr's Dr. Gideon Fell? Add to this an engrossing, if slightly imperfect, plot, clueing and the rushes of nostalgia, you have a promising debut of a series that might actually fill the gaping hole in my soul left by Baantjer's passing. Hey, he was my first mystery writer!

So, while the snobby, puzzle-plot purist in me was disappointed by the lack of ingenuity when it came to the tantalizingly-posed bridge-murders, I can easily forgive that when put against the overall quality of the story. For example, the murderer and motive were both very well handled, clued and delightfully classical. This made Inspector De Klerck and the Death Sentence a good, satisfying and, above all, warm tribute to one of the most important mystery writers I ever picked up and eagerly look forward to Dieudonné's second novel – which is scheduled to be published sometime in 2020. But until then, I have a short story, "Rechercheur De Klerck and de doodsteek" ("Inspector De Klerck and the Death Blow," 2019), to carry me over.
Geplaatst door TomCat on 6/05/2019